Review: Charli XCX proves why she reigns in the pantheon of pop at sold-out Royal Oak show 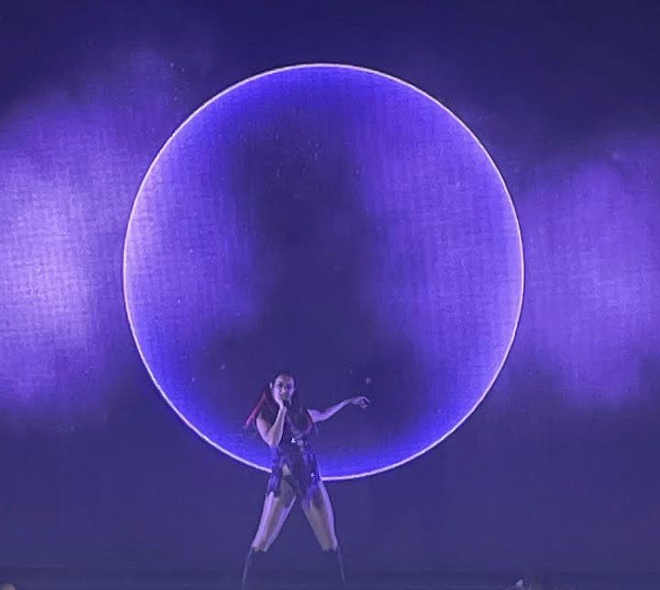 At around 9:30 p.m on Tuesday, April 27, Charli XCX, the Godmother of Hyperpop, took to the sold-out Royal Oak Music Theatre stage to take Detroiters on a wild ride.

The British pop star has reassumed her position in the pantheon of pop stardom with her latest release, Crash, promising fans an all-consuming brush with the stardom experience. Thanks to creative director Imogene Strauss and a couple back-up dancers, Charli delivered exactly that, with a stage design complete with a set of a massive staircase and light show.

The show started with the screen behind Charli featuring visuals of a road at night, the headlights glaring off the slick asphalt. Suddenly, the camera pointed to a speedometer, the blurry neon red needle steadily skewing to the right, the audio distorting until suddenly the echo of shattered glass and metal breaks the sound barrier. After the screen blacked out, Charli appeared with dancers Grant Gillmore and Nathan Kim for her Crash synth-pop track "Lightning," greeted by bone-shattering screams erupting from the crowd.

Without a doubt, Charli has proven herself over this tour to be a multi-talented performer, with her dancing sharing the spotlight . Vocally, Charli was at her absolute best, leaving no crumbs. With Crash being a shorter album, clocking in at just over 30 minutes, Charli sang most of the songs off that record, but also took us back a few years with her 2017 track “Boys,” featuring her dancers wearing white tanktops and grey sweatpants.

Midway through the show, Charli pulled out one of her tender rager anthems, “Party 4 U,” saying no matter which era Angel (the name for her fans — Charli’s Angels — get it?), the song was for you.

The set was a non-stop pop assault, bringing together the crowd to experience the show of a lifetime from an artist who has seamlessly blended the lines between underground pop and Top 40.

Charli’s newfound love of dancing took center stage throughout the show. One of my personal highlights was the dancebreak performed by her duo of dancers to the intro of Crash track “Baby,” proving to be an exquisite example of how passion during a show can take multiple forms. The vogueing-inspired choreagrpahy was incredible, and up against the background of what looked like a heavenly pantheon, it was almost ethereal. No, it was ethereal.

Charli’s audience was captivated by every moment of the show, drinking in the icon’s performance. The visual aspect of the show was stunning, proving that Charli’s vision for her XCX universe is vast and nuanced. The set included a full-moon projection — which Charli danced and sang in front of, a silhouetted figure memorializing her late friend and frequent collaborator, Sophie — as well as a neon-green Matrix-style grid pattern during “1999.” Every detail was considered and accounted for.

Altogether the Crash tour has proved to be worh every moment of anticipation, and just like Charli sang in 2020 on How I’m Feeling Now on her song “Anthems”: "I just want to go to parties/ Up high/ Want to feel the heat from all the bodies."

We all attended the party that was promised, and experienced a union of souls — just vibing to pop music.

Romanian import and Greek school dropout Konstantina Buhalis was born in Bucharest, Romania, and came to Detroit in December 1995, where her first few years of life were enjoyed on the east side and Greektown. Buhalis spent her early years reading the Detroit Free Press, Teen Vogue, and Rolling Stone and began...
Read More about Konstantina Buhalis
Scroll to read more Local Music articles