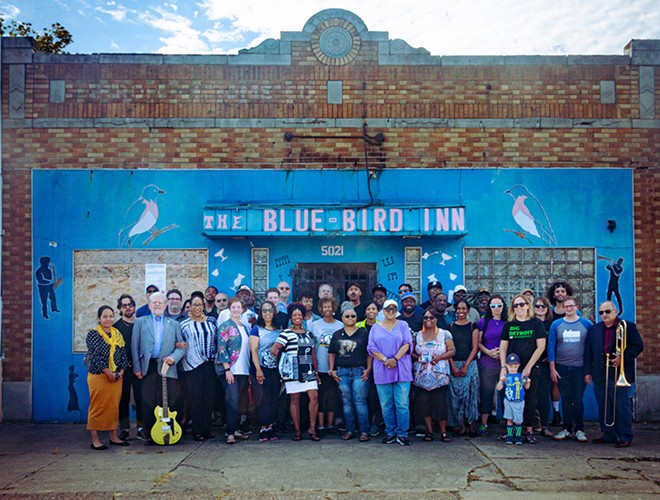 Courtesy of Detroit Sound Conservancy
Residents and community partners stand in front of the Blue Bird Inn on Labor Day 2019.

Once a jazz venue where legends like John Coltrane and Miles Davis performed, by the early 2000s the building at 5021 Tireman Ave. on Detroit’s west side was abandoned, and later threatened with demolition. But now, the building’s prospects are looking up.

The Detroit Sound Conservancy nonprofit acquired the building in 2019, and it earned a historic district designation from the city in 2020. The DSC put a new roof up late last year, allowing for the nonprofit to move on to the next phase of actually bringing life to the building.

“Fully replacing the roof was a huge step for really bringing it back,” Jonah Raduns-Silverstein of the Detroit Sound Conservancy tells Metro Times.

How bad was it? “You could see daylight!” adds Michelle Jahra McKinney, also of the DSC.

“Not just with the Blue Bird, but with any building that sits, every day is one day closer to kind of its own destruction,” Raduns-Silverstein says. “So the roof in and of itself was a really big step for us.”

The roof repair was made possible through an internal fundraising campaign, Raduns-Silverstein says. “We found some great support from some known places, and kind of some unknown places,” he says. Now, the DSC has launched a crowdfunding campaign to raise $30,000 to bring the project into the next phase. Funds will be matched by a grant from the National Trust for Historic Preservation.

To make the vision a reality, the organization has tapped Saundra Little of Quinn Evans Architects. “She’s an award-winning Black woman architect,” McKinney points out.

Little’s renderings depict a venue with a café and performance space. McKinney says the DSC could use the space for musical performances, art exhibitions, educational workshops, and other community events.

She says the design was the result of many conversations with members of the community to ask what they wanted in the space.

“I think kind of what’s pretty ingenious about the design is this flexibility and ability for it to serve many uses, while also becoming Detroit’s only music archives,” Raduns-Silverstein adds.

The back of the building will house the Detroit Sound Conservancy’s library, which includes books and other documents about Detroit’s many contributions to the world of music. 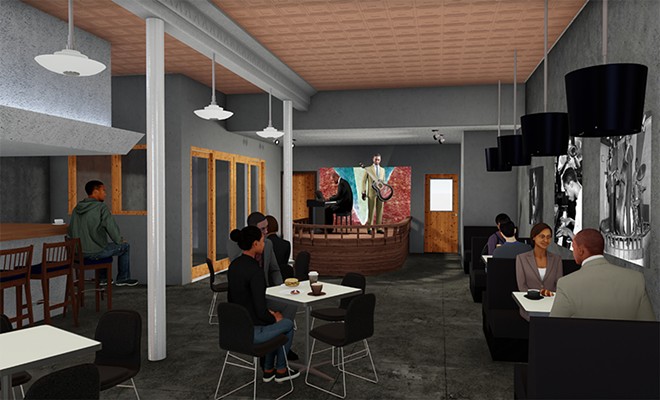 Courtesy of Detroit Sound Conservancy
An interior rendering of the Blue Bird Inn shows a performance space with a café. The venue's original Art Deco-style stage was salvaged.

So the new Blue Bird Inn won’t only be a jazz space.

“Our organization is cross-genre,” McKinney says. “I think it’s probably going to mainly be jazz and blues, but we got Motown right down the street, all kinds of Black music … we have techno, and reggae, there’s the African folklore community. There’s so many different communities that would be able to use that archive. … I was hoping that we could develop it into a place where [people from] all the genres felt comfortable coming and experiencing the archives.”

“It will surely be a kind of cross-genre, genre-agnostic venue and performance space,” Raduns-Silverstein says. “But I think the ethos will probably go back to the kind of legendary jazz days of close listening and intimacy, and peer-to-peer mentoring of the youth, but in terms of kind of the music itself, it will be expanded to any and all music that is being made and performed and enjoyed in the city now.”

Raduns-Silverstein says the hope is that the project will be shovel-ready by the end of the year. “The truth is, there’s a lot of pieces that need to fall in place,” he says.

The building’s iconic blue exterior will be preserved. The venue’s small Art Deco-style stage has already been salvaged and used by the DSC for on-site activations elsewhere. When the space is ready, it will be returned to the Blue Bird Inn.

Otherwise, not much else was left to be rescued.

“When you leave a building vacant for 5 to 10 years, every year, and every day, there’s less to salvage,” Raduns-Silverstein says.

Beyond the building itself, the DSC says the hope is that the resurrected Blue Bird Inn could help them draw more traffic and development to the community. “They need a grocery store and other stuff there,” McKinney says. “And something like this, I think, could attract that.”

But Raduns-Silverstein sees the project as an important way to preserve Detroit’s musical legacy.

“It’s much more about how do we support our culture in a way that can really sustain and have longevity, and usher in the next generation in a way where, you know, kids growing up down the street actually know that techno was invented here, or actually know what the Blue Bird Inn was down the street from where they live,” he says. “We’re so driven by this project because it’s the physical version of this deep commitment to this work, celebrating, advocating, and preserving Detroit music history — the most important innovative music city in the world, yet people in Detroit don’t even know that.”

More information about the project is available detroitsound.org/give/bird.