“The Motown thing was like a perfection of American popular music,” the California-based performer says 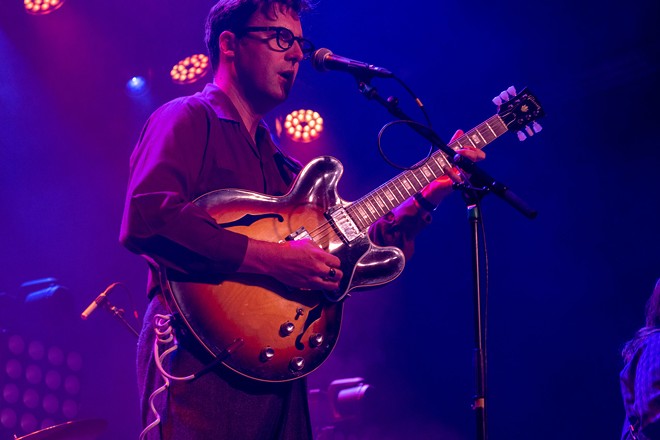 California-based performer Nick Waterhouse has been making records in his brand of old-school 1950s- and ’60s-inspired rock and soul for a decade, but he insists he’s no throwback act. He first started making music in San Francisco, where he worked at a record shop. At a time when music industry forces were pressuring artists to streamline, Waterhouse had grand visions.

“It’s crazy to reflect on having, you know, like, a basement rehearsal space with a nine-piece band, where we would play shows and get paid $100 in a city like San Francisco,” Waterhouse tells Metro Times by phone. He adds, “Some would call it my folly. I set a standard that was honestly far too high for me to uphold, but in a way, it became my own security system against mediocrity. I just didn’t hear the music any smaller, I guess is the way I can put it.”

Waterhouse’s latest record is Promenade Blue, which dropped late last year. He’ll bring his nostalgic music to Detroit’s Willis Show Bar, a long-abandoned old-school jazz club that is now enjoying a second act, with a sleek stage tucked behind the bar. Waterhouse will perform in the small club as part of a seven-piece band, with guitar, two horns, keys, bass, drums, and a backing vocalist.

“Willis [Show Bar] is actually exactly the venue, when I was recording my first album, I wanted to be playing in, and not in rock clubs,” Waterhouse says. “And so I think that it will be a very special performance. … It’s not really about setting the Wayback Machine or anything, but this is a natural state for you to enjoy my music in. And it’s hard for me to get to Detroit sometimes, so this is really cool that we’re getting to do this show.”

Of his attraction to mid-century sounds, Waterhouse says, “It’s just the romance of it. It’s not just aesthetic, but form. I’ve been interviewed a lot about influences, and people tend to make a big deal about it. But I mean, everyone has influences.”

He adds, “The reality is that when I was a young person, I was moved more by the richness, the directness of a Ray Charles Atlantic-era record or Bert Burns-produced New York City soul record. … I never had the love of like, a rock band, the way that other people I knew really did. So, I just dreamed in that language. … It was just, I hear this as three girls, two horns, and a rhythm section. And I write my songs with the call and response, ostensibly what is like American church music that made it to popular music by the ’40s and ’50s, and then all American popular music up to now.”

“My dad’s family is from Detroit and Jackson,” he says. “When I was a teenager, we went to visit Hitsville. I grew up with a headshot of Marvin Gaye on my wall. … I love Barrett Strong, I love the Andantes, I love Andre Williams, big time.”

But the Detroit artist that has influenced him more than anyone is the bluesman John Lee Hooker, Waterhouse says.

“That was how I basically learned how to play guitar,” Waterhouse says. “I didn’t learn Robert Johnson. I didn’t learn Hendrix. I learned John Lee Hooker, but my ears kept going towards more arranged stuff. So that’s sort of where the tension of my work is, I think.”

He adds, “The Motown thing was like a perfection of American popular music. It’s almost like that was the terminus, and everything is just a response or an attempt to like, refine it. It’s like, you can’t redesign a jet plane, you just keep making it more aerodynamic or radar-resistant or whatever.”

Waterhouse and his band will perform an early show at 7 p.m. and a late show at 9:30 p.m. on Thursday, March 31, at Willis Show Bar; 4156 Third Ave., Detroit; willisshowbar.com. Some tickets are still available from Mean Red Productions. The Dapper DJ will also be on hand spinning records.