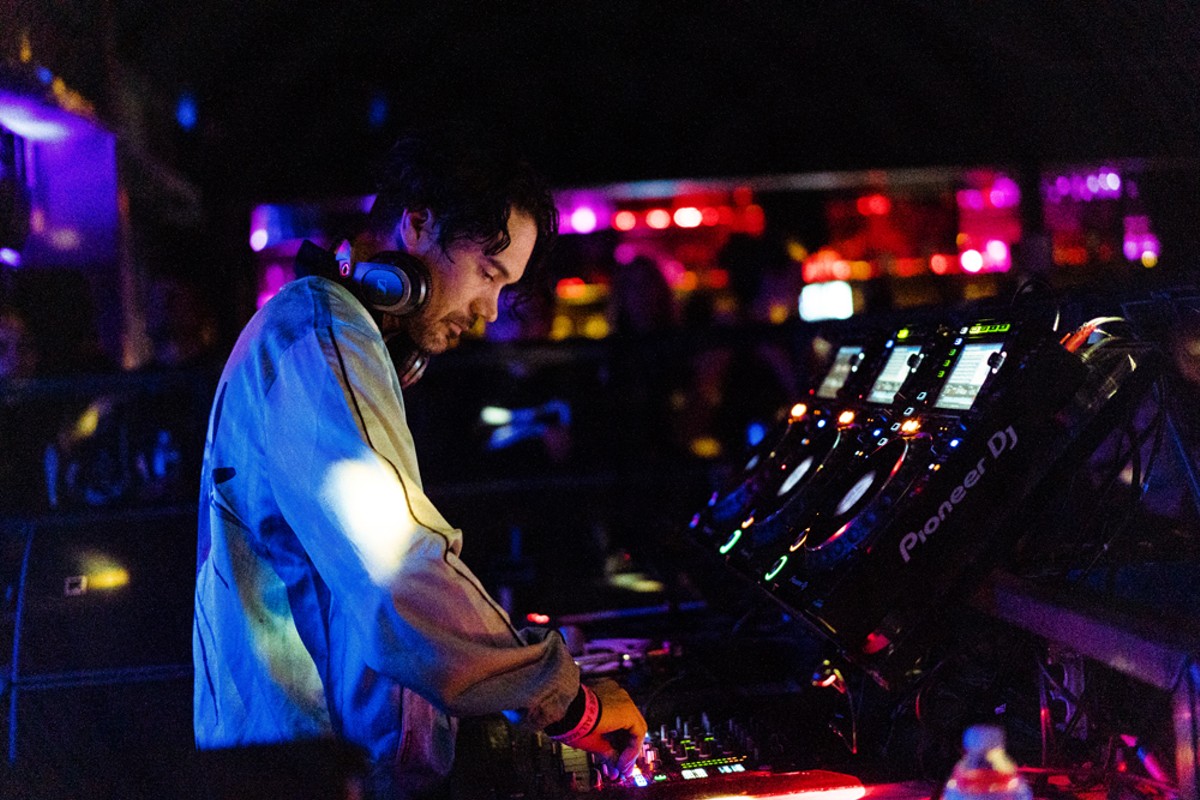 Matthew Dear could win an award for cutest voicemail of all time.

Should you reach the voicemail box of the 40-year-old producer, musician, Twitter god, father of three, and co-founder of Ghostly International — the independent label that celebrates its 20th anniversary this Saturday at TV Lounge — it's clear that he's enlisted the adorable stylings of his children, all of whom are under the age of 10 and who ever so politely will tell you that "Mat-chew D-hear" cannot come to the phone right now.

If this were 20 years ago, this type of voicemail message might seem ironic, or perhaps a nod to Scottish electronic duo Boards of Canada, and the message would have likely been recorded on a Radio Shack-brand machine collecting dust in a dorm room while Dear fussed with chords, boards, and pedals, in between class and late-night Detroit raves.

Things are different for Dear now. "I live on 10 acres in Ann Arbor. Like, I'm set, you know?" he says. "I don't go out. Unless I'm playing, I'm not going out. I'm not really partaking in the scene. And I'm not the one that could tell anybody, like, this is where you need to go and who you should see. I'd probably just text some of my cooler friends and be like, where do people go right now?"

Life has indeed calmed down in the 20 years since Dear first found himself at "the right place and right time," which was sometime during 1999 when he crossed paths with fellow University of Michigan student Sam Valenti IV at a house party. At the time, Dear had been making music independently for five years. It was only when he met Valenti, who was DJing under the moniker Spaceghost, that he was at the point where he felt he had a modest stockpile of songs that were "presentable," the result of having spent the majority of his teenage years playing around with whatever equipment he could get his hands on, making hip-hop beats for his high school friends and riding the early waves of the Chemical Brothers and Fatboy Slim.

"I didn't know that that's what I was going to do," he says of electronic music. "Sam was eager to represent a form of music and put it out as a label and start the house of Ghostly. And I was eager and chomping at the bit to release all this music that I had been piling up, so it was a cool split I think for both of us to be able to bring both of our drives, like, together, and there's no way I could be the label manager like he had been. That was never in me. I think he kind of realized his role and I realized my role, so we allowed each other a bit of flexibility, as well — like to lean on each other's talents and strengths."

The partnership led to both Ghostly International and Dear's first 12-inch single, "Hands Up For Detroit," which was produced alongside the late Disco D. The song gained notable traction in 2006 when Fedde Le Grand heavily sampled the track for "Put Your Hands Up 4 Detroit." The single would be the first of many for Dear, who has six studio records and more than two dozen EPs under his collective four musical aliases, including last year's Bunny, which found Dear breaking a several-year hiatus with a return to candid storytelling, pastoral synths, humor, seduction, and frequent collaborators Tegan & Sara. A year into Ghostly, Dear founded the label's dancefloor-oriented offshoot, Spectral Sound, which represents Seth Troxler, Hieroglyphic Being, Kate Simko, Avalon Emerson, Patricia, and Benoit & Sergio.

"I started Ghostly with the hopes of bringing local talent forward," says Valenti. "Matthew, being the first artist on the label, has set the tone for how to be bold and ambitious without sacrificing your true voice. We've been fortunate to find some success in music that isn't traditionally seen as commercial, and Matthew deserves a ton of credit for showing how it's done."

Before Ghostly and before Valenti, Dear had scored a meeting with Detroit techno icon Carl Craig through a peripheral music friend who insisted this meeting would change the course of Dear's career, suggesting that he could be the next Recloose — the electronic producer who Craig signed to his Planet E Communications label in 1997.

"I went and saw Carl, I had this meeting and here I am with my Kikwear rave pants and big sweater. And bless his heart, Carl was very, very cordial and polite, but basically he was saying, come back in five years. I just wasn't ready."

Next year, 21 years after his meeting with Craig, Dear will see his first Planet E release, which Dear says is a huge accomplishment for him and is reason to give pause to a slew of reflective hypotheticals.

"What in the hell would have happened if we never met?" he says. " I don't know. What if I hadn't met Sam and I had more of those type of meetings — what would I have done? Would I have been persistent? Would I have carried on? Would the parental voice telling me to get my college degree persisted? I did get a degree in cultural anthropology, Thanks, Mom. But the whole time I was like, when can I be done with this so I could tour and be a musician?"

Dear now teaches an eight-week mini-course at the University of Michigan's School of Music each fall, where he discusses how to navigate the modern perils of the recording industry and the ever-changing licensing labyrinth of digital streaming services. Dear shares his experiences and invites special guests, too. Most recently he invited Montreal DJ and producer Tiga.

"What I've noticed is that people either have ... I don't want to say 'it,' because I'm not talking about, like, star power or anything, but drive — you can just tell," he says. "I'm sure Sam had it, I had it, Tiga had it, and there's kids in my class, like I'm thinking of one guy, he had it. You just see it. It's in the way they ask questions. It's in the way their eyes, like, lock into a thought. I don't think you need that, but if you're going to be a performer and entertainer, if you're going to put your heart and soul on the line and try to be honest, you do have to be a little bit, like, crazy in that belief that you can pull it off, you know?"

Now headquartered in Brooklyn, New York, Ghostly represents more than 70 artists, spanning all electronic mediums, including Tycho, Shigeto, Dabrye, and ADULT. But it's more than just a label, too — a 2015 New York Times profile on Valenti describes Ghostly as a "Goop for the Pitchfork set." As of right now, you can buy a $250 Ghostly-themed or an all-white analog Super Nintendo, a graphic tee that reads "Things of quality have no fear of time," in addition to a slew of vinyl releases, including Dear's Bunny, which comes in a delicious, rainbow-splattered pressing. For Valenti, the next 20 years of Ghostly is more of the same — which is a good thing.

"I'm not saying Sam knew from Day One what Ghostly would be like in 20 years, but he's never wavered in his commitment to finding what that would be," Dear says. "I know a lot of people that have ups and downs and they cool off and they maybe take a break from something, myself included. But Sam has never taken a break from Ghostly. That's why I think it is what it is. It's more than a label to him. It's more than a licensing department. It's more than a clothing store or a brand. It's a genuine lifestyle for a group of people that met each other in our late teens and had dreams. And because of Sam, we've had a place to hang our hat and coat for the last 20 years and feel safe in our ability to present art to the world."