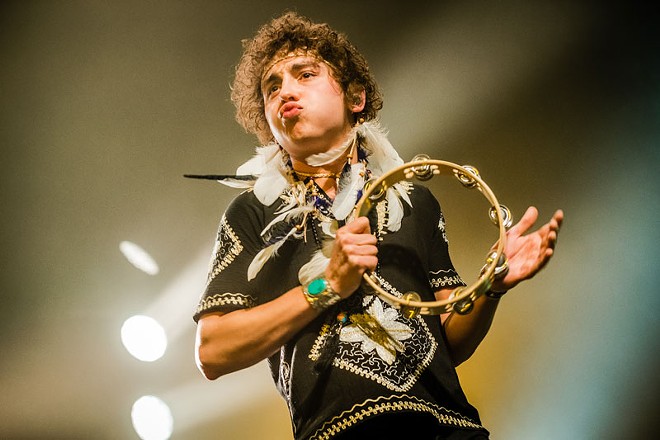 The frontman of rock band Greta Van Fleet issued a statement and made a charitable donation after fans called him out for previously wearing Indigenous garb onstage.

Josh Kiszka, 25, posted the statement on Instagram on Monday, following a fan-driven social media campaign calling on him to address the issue:

To our indigenous fans,

I see you. I’ve taken time to listen and gather my thoughts. My appreciation for indigenous culture is bigger than myself. I recognize the harm that ignorance can have on marginalized communities, something I’d never want to perpetuate. Hate, disrespect and prejudice of any kind are not welcome in this community. As I’ve come into adulthood, I’ve been able to grow and learn. This growth has not stopped and will not stop here.

The Chippewa tribe has had a particularly profound impact on my life having been exposed to their ceremonies and customs during my early years growing up in Michigan. I have made a charitable donation [to] the First Nations Development Institute to help keep indigenous traditions like theirs alive and well. Should you want to support with me, please visit firstnations.org.

The First Nations Development Institute is a nonprofit organization that assists Indigenous tribes and their communities with economic development, policy, grants, and public education.

Those behind the #SpeakUpGVF campaign said they had previously attempted to contact Kiszka for wearing the garb in 2017 and 2018.

“Indigenous fans and those practicing allyship have tried to contact Josh and ask him to remove the photos and address the cultural appropriation, but he continues to stay silent and the photos continue to stay up,” the campaign wrote on Instagram. “Remaining silent on this is upsetting and is ignorant as it upholds racist ideologies that Indigenous cultures are simply a costume, when they are sacred, and not open for appropriation. Fans created #SpeakUpGVF as a way to get Josh’s and/or GVF’s attention to request that the photos be removed and request an apology to Indigenous people.”

(To critics of “cancel culture”: See? Recognizing that you were wrong isn’t that hard. More of you should try it.)

The band, formed in Frankenmuth, Michigan, is on tour in support of its second studio album, The Battle at Garden’s Gate. The tour kicked off with a string of Michigan dates, but got cut short when members of the band got sick.

Greta Van Fleet is now scheduled to play on Tuesday, Sept. 13 at the Dort Federal Credit Union Event Center in Flint, and Wednesday, Sept. 14 at Eastern Michigan University in Ypsilanti.