All about that bass 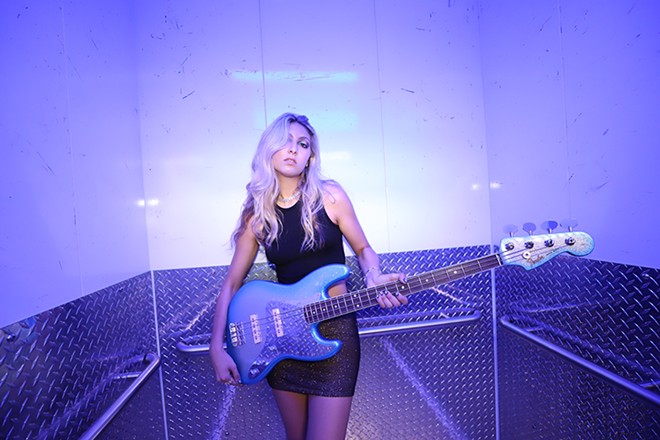 On her 2021 single “Vintage,” pop star Blu DeTiger sings about needing a guy to match her outfit: someone who will wear a motorcycle jacket but still hold the door open for her… and also knows all the words to “Mr. Brightside.”

It might technically be a tad preemptive for the Killers’ 2005 track to be considered “vintage,” but 24-year-old DeTiger — who has earned a massive social media following thanks to her bass-playing prowess and modelesque looks — draws much of her inspiration from the past, whether it’s 2000s indie rock or classic rock or Top 40 pop. During last summer’s festival circuit, her sets included a medley of covers including Gorillaz’s “Feel Good Inc.,” Outkast’s “Ms. Jackson,” and M.I.A.’s “Paper Planes” — all songs that came out when she was a child.

“I was definitely not listening to what the other kids in my school were listening to,” she says. “All my friends in middle school or whatever, they didn’t know what I was talking about. I was just on a different wave.”

DeTiger got her start playing bass at age 7, enrolling in Manhattan’s School of Rock program (her older brother Rex played drums) and studying classic rock bands like the Rolling Stones and Led Zeppelin. In her teenage years, she says she was more into 1970s and ’80s funk and R&B like Chic, Cameo, and Patrice Rushen. But she was no rockist, either. “‘Teenage Dream’ by Katy Perry is like one of the best songs of all time,” she says. “If you don’t like it, you’re lying.”

By age 17, she was working as a DJ, and got the idea to bring along her bass guitar to play live along to the tracks. She says this helped further expand her musical tastes.

As an adult, she started working as a bassist-for-hire, touring with acts like Caroline Polachek and alt-rock band Kitten. She also began to build a social media following by posting clips of herself playing bass on TikTok, which she had just started using.

She says she posted one clip before heading on an airplane to London for a gig. “I didn’t think much of it,” she says. “I just posted it and then I got on the plane. And when I landed, it had like 300,000 likes, just something ridiculous. It kind of went viral overnight. I was, ‘Oh, wow, like, people are actually into this,’ and I literally probably put like 30 seconds into making the video.”

When live music was paused during the early days of the COVID-19 pandemic, DeTiger got into a routine of posting clips on TikTok every day, covering tracks ranging from Prince to Megan Thee Stallion, and eventually garnering some nearly 1.2 million followers. She says it helped her scratch the itch to perform.

“To have another outlet where I could almost, like, instead of performing for an audience, just perform for my phone, and find a new audience online, that really helped me,” she says.

Being a social media star may very well be helping to inspire a whole new generation of girls to pick up the bass. “It’s the best part of what I do,” she says. “I get so many messages that are like, ‘You inspired me to get a bass, and now I’m playing and I’m learning your song.’ Like, that just makes me feel so good.”

DeTiger is on the road for her first headlining tour, which makes a stop at Detroit’s El Club on Monday. Her live sets have something of the eclecticism of a streaming playlist, offering both a slick pop feel as well as off-the-cuff jam sessions with her backing band, which includes her brother.

DeTiger is also at work on a new album, and just dropped a new single called “Elevator.” The video features DeTiger and friends goofing around in an elevator, with cameos including early viral social media star Rebecca Black, as well as musicians like Uffie, Dave 1 from Chromeo, and Alexander 23.

“I just texted my friends, I was just like, ‘Hey, are you free Tuesday night?’” DeTiger says. “Everyone brought great energy, too, which was so exciting.”

Back when DeTiger first picked up a bass, indie rock acts like the Killers were credited with helping “save” rock ’n’ roll, which still stubbornly refuses to die. DeTiger is not convinced it even needs saving.

“I feel like it’s always going to be around,” she says. “I think no matter how [big] electronic music gets, or people are making music on a laptop, you still can’t beat the sound of the real instrument. And everything comes back around. That actual connection of playing an instrument with your hands and producing that sound, it’s just never going to go out of style.”

Leyland "Lee" DeVito grew up in the suburbs of Detroit, where he read Metro Times religiously due to teenaged-induced boredom. He became a contributing writer for Metro Times in 2009, and Editor in Chief in 2016. In addition to writing, he also supplies occasional illustrations. His writing has been published...
Read More about Lee DeVito
Scroll to read more On tour articles