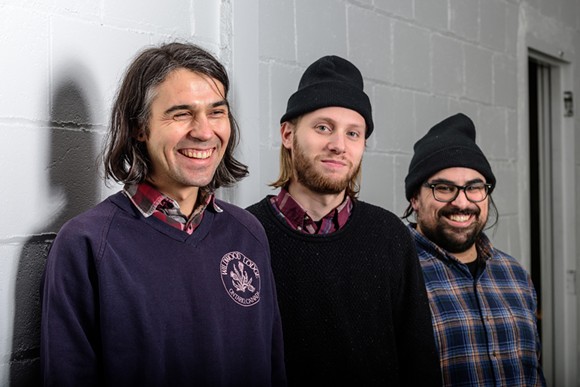 A light flickers. On the wall is a stain; on the stain lands a fly; the fly buzzes, takes off, circles around the room again. A television set in the corner abruptly turns on. Static fills not only the screen but the entire room. If there were any human occupants, they'd be dead. But there's only a fly, and the static absorbs it. This, I suppose, is the music of PRC, except not quite. Another way to put it might simply be: the sound of cold humidity.

We, as people, are overstimulated yet less aware, but when it comes to music and art, sometimes a thin shroud of mystery is kind of nice. We don't really need to know their names or what they play (which are Matthew, Chris, and Bill; and guitar, bass, and drums) nor do we really need to know when they formed (which was sometime in 2011). What we should pay attention to instead is the dismal, grungy disposition seeping out of their noise and into our world, a place of seemingly unending nausea and deeply misunderstood anxieties, anyway.


PRC is the music of these times, embroiled as it is in the dissonant shudders of Detroit, evoking a creepiness that is both specific to the city and emblematic of the Midwest. Their latest is a 7-inch: their fourth release, but first to appear on vinyl and only second to include a drummer. They put it out on Matthew's own label, Irrational Tentent, which has been quietly releasing some of the area's greatest unheard audio discord into the world since 2007. We can only imagine the practically apocalyptic post-punk noise that will be inspired in the years to come.