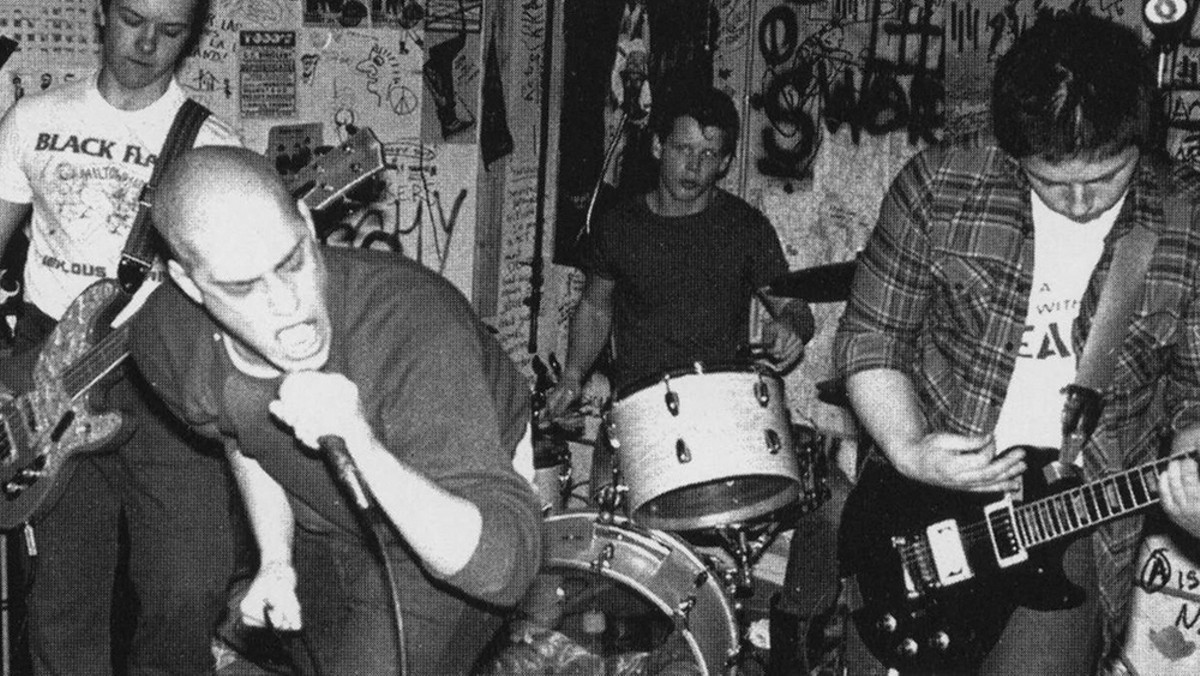 When Negative Approach frontman John Brannon takes the stage, his surroundings by now must be incredibly familiar. The room is dim and sparsely furnished, packed full of young men with short hair and combat boots. Their set begins with "Hypocrite," from the band's only full-length release, Tied Down, and as Brannon issues his judgment in one of the most basic human sentiments ("I don't believe you") the audience seems to agree. The scene is Moscow in the summer of 2014. Although if you squint, it could easily be mistaken for Detroit circa 1980.

In 2016, the sound and subculture of hardcore has undoubtedly spread across the globe, with the possible exception of places like North Korea. Although if you had told me illegal copies of the first Negative Approach 7-inch EP had been found in circulation among youth in Pyongyang, I would not be the least bit surprised. In the darkest depths of the Great Recession, with an ocean between myself and Michigan, I find myself outside Freedom Press in London — the oldest anarchist bookstore in the world — and one of the young men outside is of course wearing a Negative Approach T-shirt.

Before my phone conversation with Brannon, I am a little apprehensive. In a 1981 interview with the Dearborn cable access show Why Be Something You're Not (named after their song of the same name), a young Brannon tells us, "I write songs about things I hate, and that's a lot of people in Detroit. So it's easy to write songs."

Cynicism, betrayal, and the malaise of youth are all common themes in the band's work. But these are things people feel, and maybe this is why their message has resonated so deeply with so many across the globe. And why, if you travel to certain neighborhoods in places like Hamburg, Athens, or Copenhagen, you can see how the music of Negative Approach and their contemporaries have transformed our physical surroundings.

The band will embark upon yet another European tour this summer, where they will appear at Wacken Open Air festival in Germany in front of 750,000 people. Brannon is keenly aware of how far the band has come, and laughs as he reflects on the absurdity of how four kids in their teens managed to produce music that would find such a truly global audience. "Iron Maiden, Black Sabbath, Foreigner ... Negative Approach. I don't know how we fit into that," he says.

In their formative days, Negative Approach was known not for playing open-air festivals, but rather for performing alongside other emerging hardcore legends at the infamous Freezer Theater on Cass. In June 1982, the band opened for Minor Threat at the Freezer, alongside fellow Detroit punks the Meatmen, in what would ultimately be remembered as the venue's final gig. Speaking to both Brannon and Chris "Opie" Moore — the band's original drummer with whom Brannon composed many of their most memorable songs — two competing narratives of the evening emerge.

After my conversation with Moore, I am left with a vision of the Minor Threat show that sounds like something out of Apocalypse Now. Unlicensed venues have, of course, played a prominent place in Detroit's musical and cultural history, and until that fateful evening, the building served as a sort of incubator, where the area's skateboarders and skinheads could hang out and see something exciting, unmolested by the authorities. While Brannon lived in the city, Moore would regularly make the trip in from Mount Clemens to rehearse or perform. But that night, the composition of the crowd, and sheer number of attendees, came together to form a noxious public order situation.

"You could pretty much do whatever you wanted there," Moore says. "It could be volatile at times, but also a lot of people just came there and hung out. Different bands from different scenes and cities would come and play there. There were some really horrible experiences. I mean, the Minor Threat gig with Negative Approach — that ended up really bad, because that was so populated. The police were involved, and it was crazy, and kind of scary."

Brannon later says the evening "one of the most exciting shows ever," adding, "It was a total rush just going into those gigs. Plus going down to the Corridor, it just had that element of being dangerous."

Looking back on footage from the era, it's clear that the Detroit hardcore scene had a certain look. Shaved heads were ubiquitous. At their show at Third Man Records in January, the band covered Sham 69's "Borstal Breakout." Brannon has long professed a fondness for bands like the 4 Skins, the Blitz, and Angelic Upstarts. But for him and the rest of the band, many trappings of the scene ultimately became formulaic, obnoxious, and even boring.

"Detroit really embraced the kind of London skinhead thing, which we thought was kind of stupid," Brannon says. "There were dudes walking around acting like they're from London. The whole boots and braces thing — we were just, like, bald American kids. We were proud to be from America, we weren't trying to act like we were English. But the fans started coming to the shows and they started just beating up everybody. They would just come to our shows just to fight, and I mean it wasn't even about music for them. They were just a bunch of kids from the suburbs with an identity crisis and kind of latched on to something that was happening and kind of took it too far. Towards the end, the shows for Negative Approach in the '80s, it was just kind of a drag."

Brannon once joked that his main inspiration in forming Negative Approach was the "Battle of the Bands" episode of CHiPs, where a fictional group of Los Angeles punks called Pain (in a possible homage to Fear's performance in The Decline of Western Civilization) performs their only song, "I Dig Pain." Their fans engage in random acts of violence and antisocial behavior, while the bassist kicks audience members in the face, and the lead singer hits the mic stand with his guitar for no apparent reason. Even at the time it was released, the episode was a hilarious caricature of what actually happens at a punk rock show. It is important to note, however, that it was based at least partly on how most people perceived this strange new fad.

Today, you're likely to hear the music of Black Flag or the Dead Kennedys on a prime-time drama series, or in a shoe store at the mall. But at the time it was produced, it was music you could only access through spaces like the Freezer, and music that many Americans found truly threatening. While working as a roadie for his friends the Necros, Brannon was present during Fear's fateful appearance on Saturday Night Live, which sounded the death knell for hardcore punk rock on the popular weekend variety show. It would be more than a decade before that sound was finally accommodated and co-opted by the mainstream media.

Following the dissolution of Negative Approach, Brannon went on to perform in a number of successful Detroit outfits, including Easy Action, and later the Laughing Hyenas. In 1996, Moore moved to New York City, where he still lives with his family in Prospect Heights, Brooklyn. He has also produced some truly excellent work as part of his project, Moore and Sons, which he says emerged from a rediscovery of the music he enjoyed before he found hardcore — bands like the Clash, Devo, and even the Beatles.

When I ask Brannon if they would ever consider making new music as Negative Approach, I am amazed by, and somewhat unprepared for, his answer.

"You know — 30 years since the last record came out — I thought it's about time we write some new songs," he says.

Brannon's tone becomes noticeably excited says Opie will be making a special trip from Brooklyn to help write the new album. "If we're going to do anything under Negative Approach, it's going to be totally brutal," he says. "It needs to hold its own, and we wouldn't want to come back with anything that's lame."

Brannon's voice has definitely changed over the years. But while similar developments might put some people off attending a Bob Dylan show, for example, it seems that Brannon's vocals have actually gotten better in many respects. Where his vocals as a teenager tended to sound like more of a bark, these days at Negative Approach shows, he almost sounds like a wild animal caught in a snare.

There are only a handful of the older punk bands that actually manage to still put on a decent show, and for every band that manages to retain one iota of their past urgency, there are 10 that are there simply to rob their audience. But Brannon believes the Detroit bands are truly distinctive.

"We're all hicks from Detroit. You go to the bigger cities, it definitely affected what's going on there, because it's so trendy. I think the reason Michigan is so great is because we're not affected by the big city. We're bored and we want something to do and we want to create original music. I mean, all the greatest bands in the world have come from Michigan: Alice Cooper, MC5, Stooges, the Motown thing, everything. Detroit's definitely had its own original take on the whole thing. We might look at London, New York, but at the end of the day. All those fuckers are pussies. Detroit's real, man. You know?"

As if by accident, Moore also draws an important parallel between Negative Approach and the likes of MC5 and the Stooges.

"I think of them as rock 'n' roll, but I think of them as economical in terms of how they play, and also about the goals of the performance. Which is probably — there isn't any. It's like, 'Let's see what happens.' There's that correlation. It's less like show biz. And it's less like, 'I wonder what will happen one year from now?' It's more like, 'Let's just see what happens tonight,'" Moore says.

Just like their celebrated Grande and Motown predecessors in Detroit, the music of Negative Approach is of historic significance — for the Cass Corridor, for the city, and ultimately, for their chapter in American culture. But Brannon seems to remember what it was like before this became apparent to the rest of us.

"We were just bored kids who wanted to make shit happen, because people were trying to tell us we couldn't do it," he says. "And we were like 'Fuck you, yes we can, and we're gonna do it.' And we did!"

Negative Approach performs with special guests Hank Wood, the Hammerheads, and the Cheetahs at El Club on Wednesday, May 4; Doors at 8 p.m.; 4114 W. Vernor Hwy., Detroit; $10, all ages.