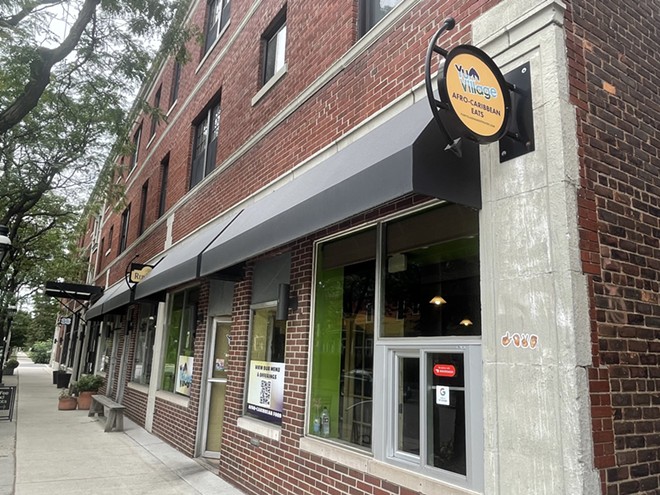 The Caribbean restaurant’s second Detroit spot is open for business at 8029 Agnes St., which used to be Detroit Vegan Soul before it closed in January. Yum Village owner and chef Godwin Ihentuge acquired the former vegan space and an adjacent beer garden where Yum Village used to operate as a food truck back in February.

Yum Village West Village is primarily carry-out and pickup-focused, as there is little space for sit-down dining inside. Customers are free to eat in the garden, however, which features a few picnic tables. On Sundays, the beer garden gets activated as a community-style brunch event complete with a DJ and djembe player.

There’s no beer in the garden just yet, as Ihentuge is still waiting on his liquor license to be approved, but you can bring your own liquor to mix with Yum Village’s fresh juices if brunch without booze just doesn't feel right.

Ihentuge tells Metro Times the brunch menu is always changing depending on his mood and what recipes he wants to play around with. Previous offerings have included jollof-style deviled eggs, candied beef bacon, and suya (peanut rub) chicken and waffles with hibiscus syrup. Tickets, which cost around $50, are extremely limited — the link to purchase them is released sporadically through Yum Village's social media accounts, so you have to really be paying attention to get in on it.

“We just try to have some fun with it,” he says. “We got our start doing pop-up dinners back in the day, so it’s really going back to our roots doing that. The chicken and waffles will probably always be on the menu, but other items will change depending on our ingredients and what we want to do.”

Ihentuge has applied for a Motor City Match grant, which he hopes will help him spruce up the bare-bones space. Eventually, he plans to add a partial enclosure in the garden and incubator space for small business pop-ups.

Ihentuge is a busy man. Beyond Yum Village’s staple shop in New Center and this new spot, Ihentuge also recently opened a Cleveland location. But at the West Village outpost, Ihentuge is in the kitchen with help from his mother and niece as they struggle to staff the restaurant.

“It’s tough. It’s summer and people don’t want to be inside working. I get it,” he laughs. “So I’m here making jerk bowls until we get another team member. Since I’m in the kitchen I get to play around more.” 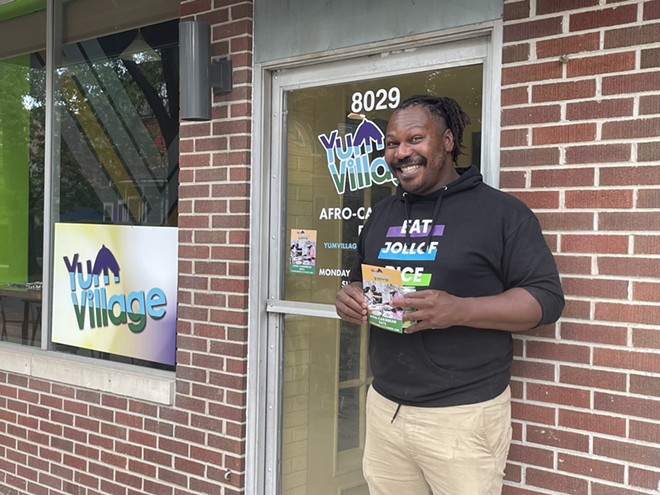 And play around, he does. Besides brunch, the West Village shop features creative weekly specials that put a Caribbean spin on favorites like tacos, egg rolls, and even banana bread.

“This week we’re doing plantain bread,” Ihentuge says. “It’s just banana bread, but with plantains instead. We’ll probably also do like a beans and cornbread, but instead of regular cornbread it will be the plantain bread with a bean and okra stew.”

While other restaurants have shuttered during the pandemic, Ihentuge says Yum Village’s variety of offerings and DIY spirit has kept them going.

“Forty percent of Black-owned restaurants closed last year due to the pandemic, but we’re more than just a restaurant,” he says. “We have grab-and-go meals in five grocery stores and we sell a lot of meal plans. There’s a lot of income from outside just the restaurant that comes in to help us supplement the ebbs and flows of the restaurant industry. Plus we DIY a lot of this stuff ourselves to keep our costs down. We just painted the walls here ourselves.”

Focusing on pickup orders which are placed online and ordering via tablets at the New Center location has also helped with staffing issues.

Since the West Village location was previously a restaurant, which already had kitchen equipment and didn’t require a massive build out, Ihentuge was able to open up shop relatively quickly. While the restaurant is still being set up, he's pumping out online orders and rolling with the Sunday brunches.