What we learned getting drunk with Detroit bartenders in New Orleans

It's a thousand degrees, or at least it feels that way. The humidity stagnates somewhere between Dagobah and the Everglades. In other words, it's New Orleans in July. The only thing that would bring a couple dozen of Detroit's talented bar employees here is the promise of networking, free-flowing booze, and the chance to geek out about the future of the cocktail industry.

Tales of the Cocktail, now in its 15th year, is the international trade show/conference/debauch that brings together industry folks from around the globe. At its heart, though, is a gathering of passionate drinkers who are committed to hospitality.

This becomes obvious to me when, flat-out exhausted from the heat and the crowds, I arrive at an elegant two-story home a pleasant distance from the stench of Bourbon Street. Over the course of a couple of days, just about every Detroiter down here pops in and out to sample food and drinks from the hosts of the party — Founders, Selden Standard, and Two James. There are massages and vitamin-packed McClure's pickle juices. There's a swimming pool, an Absinthe-filled squirt gun, and even an ice luge for easy consumption of shots.

But most importantly, there's an ongoing, friendly conversation about the state of the cocktail industry in Detroit.

Those present say since it joined the national cocktail revival scene in 2011, the Motor City has transcended the need to prove itself. "Everybody knows that Detroit is a story, Detroit is a brand," says Roger Fruin of Peterboro. "We're there now."

Detroit's bar shapers are more interested in meta-trends than specific spirits or the new drinks we'll sample. They're fully aware of what the liquor brands are promoting, and they know what their customers ask for. They can predict what they'll be asking for next year, too. Most agreed that we'll be seeing a lot more rum, especially small-batched and barrel-aged rums. Savvy drinkers in Detroit and elsewhere have been fans of its use in tiki cocktails for a few years now, and just like bourbon, a fine aged rum can be savored by itself. Rye and mezcal, too, will continue to feature in drinks for a while yet, they predict. The speakeasy trend is over and done. Ultra-fussy micro-measuring and condescending mixologists are out.

As Liz Cosby from the Keep predicts, "people are going back to the Yes Bar."

What's a 'Yes Bar"? Over a crowd of enthusiastic, passionate, and occasionally combative experts, Will Lee of Grey Ghost explains, "You don't have to reinvent the wheel. We're going to move back to more lighthearted, fun drinks." 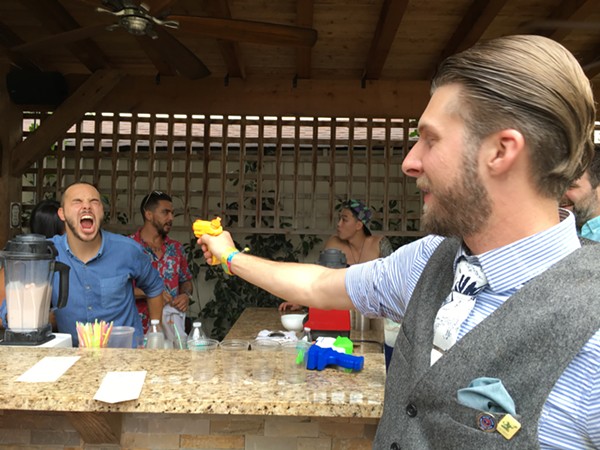 That's when the chaos erupts, and at least 10 people argue about what makes a "fun drink".

(There was, in fact, a hand-crafted and hand-bottled pseudo-Zima on offer at the house as a sneak preview of things to come, and by god, it was delicious. Frankly mind-blowing. Crisp and refreshing, without the cloying sweetness or gnarly aftertaste of the original, it was the perfect poolside drink for the sweltering New Orleans afternoon. If this is what Detroit's trending bar scene has to offer, I am all about it.)

In other words, Detroit's bartenders aren't worried about impressing anyone but themselves anymore. Even so, at this year's conference, some Detroit talent has been busy receiving accolades. Dorothy Elizabeth, beverage director at the new Siren Hotel, was inducted into the Dame Hall of Fame, Tales of the Cocktails' premier award for exceptional women in the spirits industry — an award only granted to five women this year. And Adil Yamin, beverage director at Townhouse and Prime + Proper, was running his ass off as a Grey Coat in the Cocktail Apprentice Program (CAP). The group is composed of around 70 people from all around the world dedicated to the next steps in cocktail culture, insiders in the newest trends.

The Detroit way is all about listening to national trends, but also adding a "how ya doin'?" to the traditional bar patter. The Detroit way is the insistence on asking what you like before pushing the latest muddled atrocity in front of your face. It's the focus on the person rather than the expectation. But it's also about knowing exactly what every ingredient tastes like, and knowing what you might like before suggesting a drink. 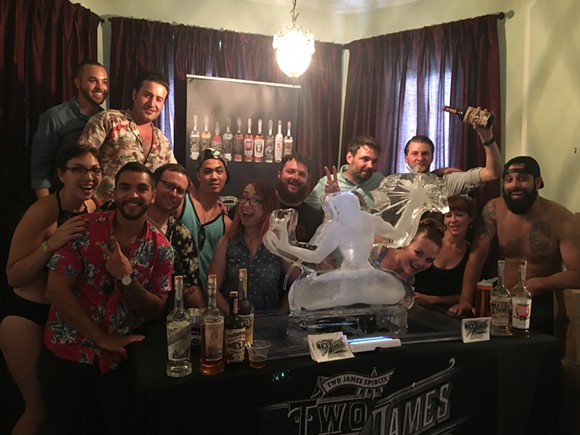 "It's about the experience, really," says Amber Sun from the Apparatus Room. "If you're sitting at my bar, I want you to really feel the Detroit feel. We have this world-class feel now, but it's still homey. Anybody can pour your liquor, but we still curse like sailors and we're still covered in tattoos and piercings. But we'll still give you this great, hospitable experience."

It was a long week in New Orleans for everyone there. It's been a long couple of years in Detroit's bar scene, for everyone on either side of the bar. After talking to 20 or so Detroit bartenders around the city and at the Detroit house, I can say the Motor City's bartenders are an incredibly dedicated, smart, and entirely spontaneous crew.

They love what they do. They also throw a hell of a party.