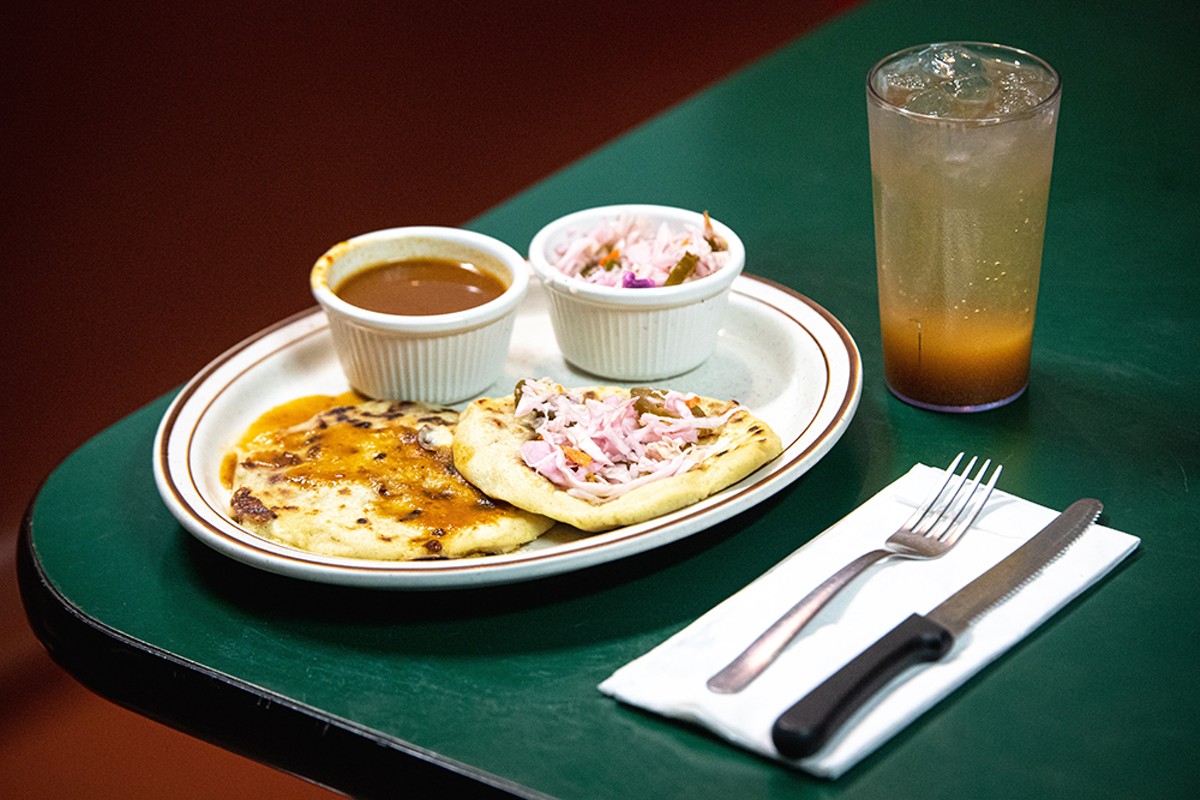 When I lived in Guatemala in the last century, the song you’d hear constantly on the radio was “A mi me gustan las pupusas” (“Me, I like pupusas”). The tune has stayed with me ever since, and you can catch a manic version by Espiritu Libre on YouTube, complete with some Motown-ish dance moves. “Are they empanadas? No! Are they tamales? No, no, no…”

The pupusa is the national dish and comfort food of El Salvador, but the song was intended and received as a bit naughty.

There’s a reason why we like pupusas, and why so many cultures have their versions: empanada, pasty, arepa, pierogi, pastelito, samosa, turnover, panzerotti. “Me, I like any dough-based product,” as a gringo-based friend of mine explained.

I’m a fan of Southwest Detroit’s long-standing Pupuseria for its thick, handmade, lightly browned corn tortillas, which are the outside of a pupusa. They’re as different as day and night from the thin, bendy tortillas from the factory (don’t even talk to me about flour tortillas, unless we’re discussing the flavor of library paste). You can taste the corn! They’re a quarter-inch tall!

The cooks at the Pupuseria start with Maseca brand corn flour, which is mixed with water to form the dough, or masa. They go through 100 lbs. a day, and 250 lbs. on weekends. If a plain tortilla is wanted, a circle is quickly patted out by hand (no tortilla press is used) and cooked on a huge electric plancha. If the goal is a pupusa, a filling is poked in while the masa is still in ball form, and it’s then flattened and cooked.

Every pupusa at the Pupuseria includes mozzarella, and that’s usually the main flavor; squash and loroco (a vine with edible flowers), even small amounts of shrimp or beans don’t really make an impression on the gooey cheesiness and the warm corn-ness. Jalapeño does add bite, so order that if your idea of comfort food needn’t be bland. In any case, the focus is on the tortilla, not the filling. The pupusas are always served, as the song specifies, with crunchy curtido, a good-sized bowl of purple-and-green non-mayo cabbage slaw with plenty of jalapeños.

The other specialty, to my mind, of Salvadoran cuisine is horchata, which is made from morro seeds rather than rice as in Mexico. The morro tree has hard, “cannonball-like” fruit that are difficult to break into, but it’s worth the effort. At the Pupuseria they order a powder that includes toasted morro seeds, peanuts, sesame seeds, rice, and toasted corn, and mix it with milk and sugar. The result is sweet and rich and very slightly nutty.

There’s plenty else on the menu, of course: guisados, caldos, tamales, eggs (served anytime), fried dishes. I ordered a caldo de pollo, which to me meant chicken soup, and was surprised to have it appear in two stages: fried chicken with salad and rice on a plate, then a big bowl of rich, fatty chicken broth replete with carrots, yuca, squash, and chayote. I asked the server if it was OK to put the former into the latter, and she replied, more or less, that it was a free country. I thought the chicken, which was sort of dry, with a crisp crust, needed the moisture. The rice was succulent, studded with little dots of carrots, peas, and corn.

Confusing me again, the two guisados I tried were not stews, though that’s the translation on the menu. Chicken guisado is marinated before it’s roasted but the two big pieces of moist dark meat are presented just with lots of rice, a little salad, and puréed beans (red and pinto mixed).

The beef guisado is somewhat more stew-like but less interesting in flavor. Seafood guisados and caldos are also possible.

I found the chicken tamal too bland, with the masa undercooked; it’s different from either the small dry cylinders that pass for tamales in Mexicantown or the huge, luscious Guatemalan ones you can get at El Chapin on Junction, with moist masa and plenty of filling.

For dessert are fried plátanos, served traditionally with a pool of warm puréed beans and another pool of cooler, tangy crema. Be sure to get all three in each bite.

The licuados (milkshakes) could also be dessert: strawberry, banana, or papaya, topped with lots of cinnamon.

Décor is basic, with some large hangings showing Salvadoran village scenes (man with machete, woman carrying chicks on a head-tray). A large TV is tuned to telenovelas. A patio was added during the pandemic.

Spanish is definitely the main language in use here, but the menu includes translations. No prices, though, as if this were the lady’s menu in a fancy restaurant a century ago. If you have any trouble communicating, which I don’t predict, server Sandra will fetch someone. She and her sister Milagro work with their brother Miguel Hernandez, the owner.