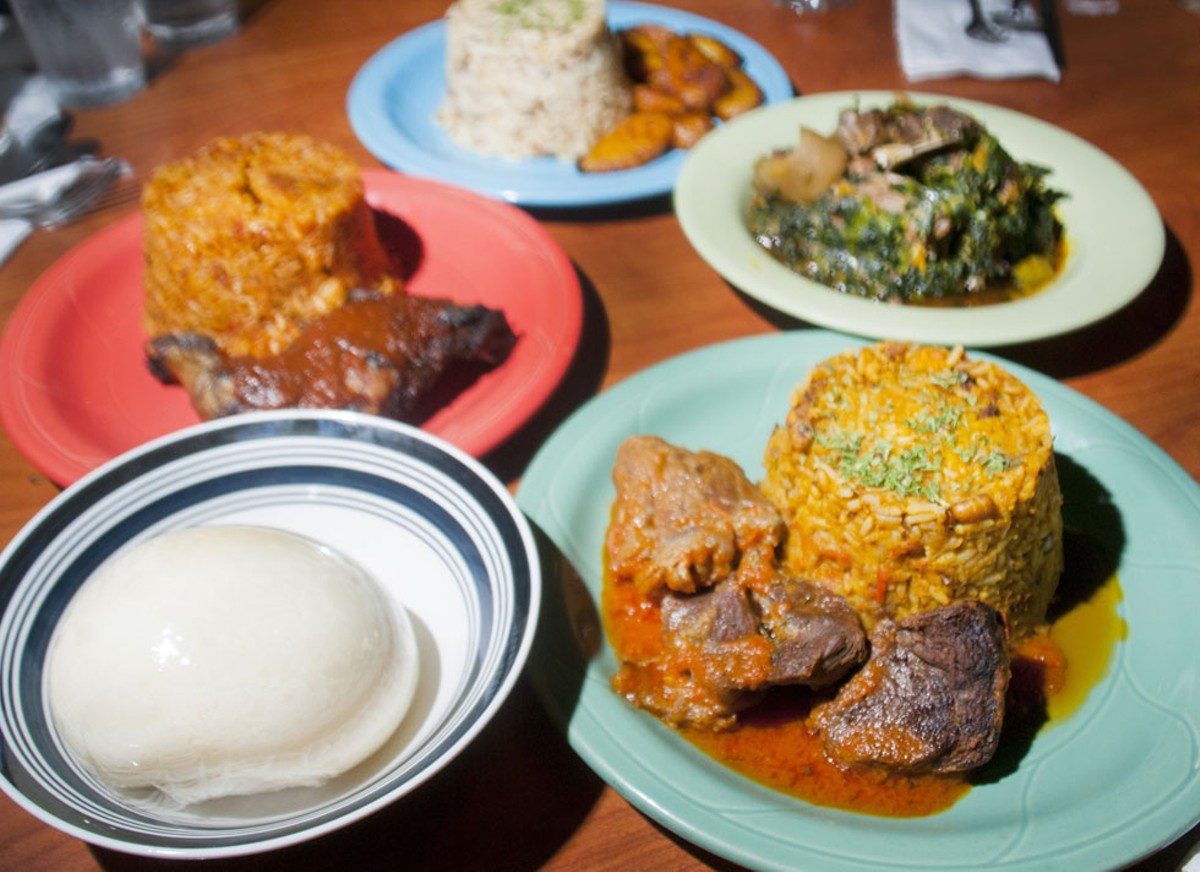 It is — at least for this city dweller — not the kind of stretch routinely traveled. But there's a lot of culinary value to be found in the strip mall sea. Here you can choose from eastern European markets selling whole smoked sturgeon, Jamaican Fenton's Jerk Chicken, Taste of Ethiopia, Luciano DelSignore's dishes at Bacco, and a gem in Kola.

While it is metro Detroit's only Nigerian brick and mortar restaurant and lounge, several pop-ups and food trucks also trade in the West African nation's cuisine. Owner Ime Ekpenyong says the dishes of nations like Ghana, Nigeria, and Senegal are similar enough that "Nigerian" is essentially synonymous with "West African." And while there's Maty's African Restaurant rolling in Old Redford, it's a different feel and menu than Kola.

There's also some Caribbean fare in Kola's kitchen, but many of Caribbean cuisine's roots run back to West Africa, and Ekpenyong's take isn't like what you'll find in Detroit's small-but-mighty Jamaican food scene. And Kola (named for a common Nigerian tree from which caffeinated beans are harvested) is run by Nigerians and its menu holds some Nigeria-only specialties. In short, it's unique in metro Detroit.

The space feels like a modern, hip lounge, and for many of the hours it's open it is one to a degree. Roughly a third of Kola is dedicated to a dance floor and DJ booth, and depending on the night that you're there, you'll examine the yam-heavy menu while listening to reggae, soul, or Caribbean music.

You'll do so from a dining area with high tables and stools set far apart, and a few couches near the dance floor. I'll admit to some doubt upon entering, as modern clubs aren't the usual destinations for fine cuisine. But Kola dealt with any skepticism straightaway with its appetizers. Moi moi ($6) is billed as a steamed black-eyed pea pudding and arrives looking like a Nigerian tamale. Its form is achieved by beating the beans to a paste that's then cooked in a mold. The almost gelatinous, tan loaf holds a hard-boiled egg and is speckled with ground red habanero pepper that radiates heat, with ground crawfish and ground bell peppers. Its distinctive and contrasting flavors work together with the unique texture to create something fairly exotic — and totally delicious.

The bits of chicken that arrive in the suya appetizer ($13) are grill-charred and dusted in a fully flavorful blend of yaji spices. Ekpenyong wouldn't share what drives the flavor of the salty bits beyond to say that there's cayenne and onion powder at work. Kola serves the bird with a small pile of diced red onions and tomatoes, and toothpicks are employed to assemble what are essentially mini Nigerian shish kabobs. It could be the menu's best item, and that's a tough race to win.

Stews and soups are a big part of Nigerian cuisine, and the edikang ikong ($16.50) is a dark, deep green, leafy vegetable soup of kale, spinach, and dried catfish. It seems a lot like an American soul food dish — which isn't much of a surprise since American food has roots in West African cuisine — but it's also different from what I've encountered at soul food restaurants. Our group ordered ours with goat, and we were given several hunks of tender, fatty meat that bob among the folds of greens in the clear, salty broth.

All soup selections come with a Nigerian-style starch, and we chose fufu, a yam that looks like a dough ball that you would pound out to make pizza crust. But it's really a semi-gummy starch ball made of white yam from which you pull pieces that are then soaked in the edikang ikong's broth and used to gather up the deep green leaves.

The rice dishes are sizeable, and the jollof rice ($15) is the best. It's an aromatic and deeply flavorful tomato-driven rice that's jumbled with onions, garlic, tomato, and bell peppers. (Again, Ekpenyong guarded his secret spices.) There's an apparent Jamaican or even creole or cajun tie, and the rice dishes come with your choice of meat — beef, chicken, jerk chicken, curry chicken, fish, and goat, and on weekends Kola offers jerk chicken wings and curry goat. The jollof works perfectly with a chicken leg and thigh that arrive onder a healthy slather of jerk barbecue sauce, some of metro Detroit's best.

The menu notes that the rice and beans entree ($15) includes smoked fish (which turns out to be catfish), ground and cooked in the rice. You won't have trouble detecting it, but while the dominant flavors are smoked fish and salt, it's not off-putting. Small bits of slightly chewy smoked turkey dot the mix and the plate holds an almost gritty texture that leaves your mouth with a slight burn from the habanero.

We paired coconut rice and beans ($15) with the sweet plantains, which run an extra $2.50, but are worth the cost. Its jumbled with black-eyed peas and holds a subtle-but-constant taste of coconut, and the dish is altogether cool and mellow.

For dessert, our server brought us puff-puff — also called African doughnuts — that are semi-sweet fried dough balls not too unlike a mellow Munchkin doughnut. As Kola is part nightclub, it holds a full bar and a wide selection of beer. And even if lounges and clubs aren't your scene, Kola is something special. 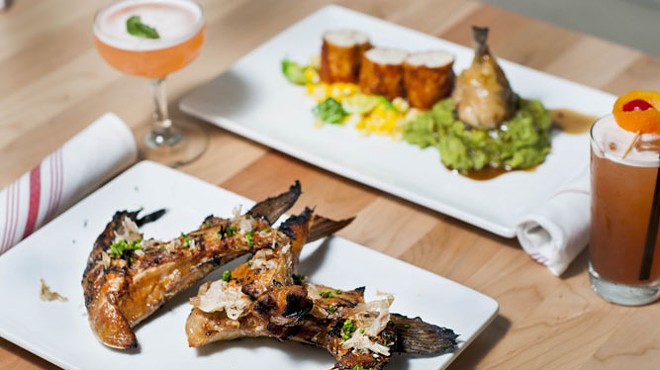