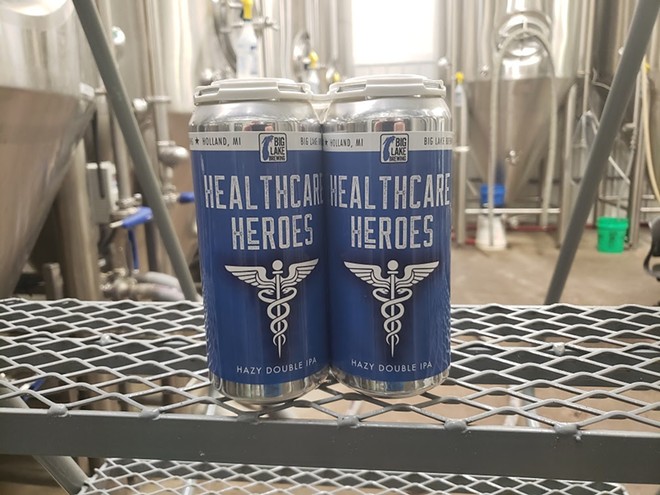 Healthcare workers are going to need to crack a cold one when this is all over. And thanks to a Michigan brewery, they'll be able to sip on a frosty brew dedicated to their hard work amid the coronavirus pandemic.

Joining the trio of tribute beers brewed and released by Holland-based Big Lake Brewing is its Healthcare Heroes Beer. Described as “hazy,” the double New England IPA clocks in at 9.0% ABV, in other words, enough to get healthcare-worker–wasted.

To celebrate the beer's release, Big Lake Brewing has teamed up with distributor Imperial Beverage to donate funds to Holland Hospital and Ann Arbor's St. Joseph Hospital, where the label and beer name were conceived by the hospital's nursing staff. The partnership has also made donations to Henry Ford Hospital in Detroit, with plans to donate to other hospitals in the state. Proceeds from the sale of the beer will go toward future hospital donations.

“We wanted to give something back to the healthcare heroes in our communities, and celebrate them with their own tribute beer,” Big Lake Brewing owner Travis Prueter said in a press release.

The Healthcare Heroes brew is the latest in Big Lake's inspirational beer line to give hops and hope during the pandemic. The brewery, founded in 2009, has also released its Farmer Strong and We're In This Together IPAs.

Four-packs of Healthcare Heroes Beer are expected to hit the shelves by May 22 statewide and can be found locally by visiting imperialbeverage.com.