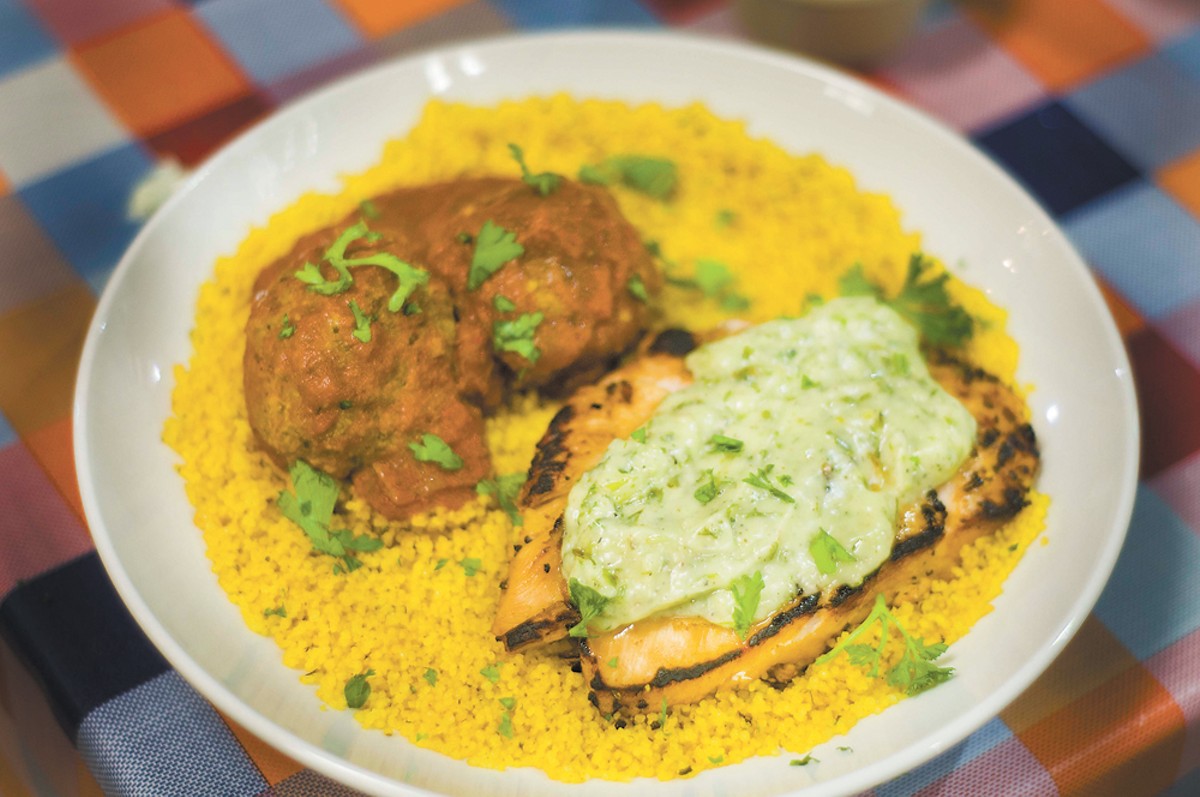 It could be argued that labeling Ann Arbor's Harissa Market Cafe a "Tunisian" restaurant isn't entirely accurate. The identity of the North African nation's cuisine is the identity of the civilizations through time that met in the region along trade routes and headed north to Europe and the Roman Empire; east to the Ottoman Empire and the Middle East; or south to modern-day Africa.

Co-owner Khaled Houamed's explanation of each dish can also be a bit of a history lesson. But, regardless of whether there's Italian, Lebanese, French, or Ethiopian prints on a recipe, Harissa's food is often heavy on aromatics and built with layers of complementing flavors from bases like sofrito. Houamed, who runs the kitchen, opened the restaurant just over six years ago with his wife and son. He says Harissa is North African food from a Tunisian perspective. All his dishes are made from scratch with produce from local farms and meat from an Eastern Market butcher, while Harissa's menu can change with the seasons.

The menu, as it is, is actually a deli case. Each of Harissa's dishes are in a cooler up front, and guests point to what they want. The employees warm up the dishes that need it, and serve everything on regular plates while charging by the pound. It's a good deal — a friend and I got enough food for five people for under $50 with drinks.

About a third of Harissa's dishes are dips, and among the best is the sharp orange-red harissa. It's a bright and smoky dish made with a blend of sweet and spicy red peppers, olive oil, and spices like cumin and caraway. The Zaalouk is also another smoky dip, but it's built off of caramelized onions that are cooked with garlic, tomatoes, eggplant, and spices like cumin. Houamed says it's halfway between a Moroccan zaalouk and caponata, a Sicilian eggplant dish.

If you're standing in the right spot on Tunisia's shore, you can look into the Mediterranean Sea and see Sicily on the horizon. The proximity is partly why Tunisians eat more pasta than any other people outside Italy, Houamed tells me, and when the Roman Empire took over modern-day Tunisia's Carthage around 200 B.C., the nation's wheat fields were utilized for the empire's pasta production.

That partly explains why Harissa serves lasagna and meatballs. The latter are made with merguez, which is typically a lamb sausage native to North Africa that's flavored with spices like harissa, cumin, coriander, and more. Here it's made with lamb and beef and rolled into tasty meatballs.

The whipped feta rosso is a creamy, strong dip of feta, fresh basil, red peppers, and sundried tomatoes. If you like feta, this is your dish. Harissa's take on Greek skordalia is a punchy mix of potato, parsley, olive oil, garlic, smoked paprika, and Ethiopian berbere spice. "It's an excuse to eat a lot of garlic," Houamed explains.

Preserved lemon and olives command a heavy presence in the chicken tagine, which I like, but the dish was also loaded with spinach, which isn't my favorite. However, that's simply a personal preference and those who enjoy spinach should check it out. Harissa's chicken chermoula is among the best chermoula I've tried. Houamed likens chermoula to chimichurri in that it's an herb-heavy marinade or sauce. His version is tangy, with preserved lemon, fresh parsley cilantro, mint, basil, dill, green onions, and olive oil. That's spread across a chicken breast that's brined overnight in a mix of tea, sage, dried limes, sugar, salt, and other spices. Houamed then sears the bird and bakes it in a broth flavored with fresh herbs. Laborious, but worth it.

Harissa's bacalao is a salted cod pie consisting of two layers —  one of salted cod mixed with leeks and celery, and another of potatoes with cumin and caraway. The salted, sun-dried cod takes days to prepare, as it's soaked and washed, but the final product provides a big umami bump. Houamed describes it as a "maritime shepherd's pie," which is an accurate way to put it. If the cod's fishiness is too strong, temper it with tzatziki served on the side.

Find more of Italy's influence on its southern neighbor for dessert. Houamed says there are gelaterias all over Tunisia, and a west Michigan company produces flavors specifically for Harissa.