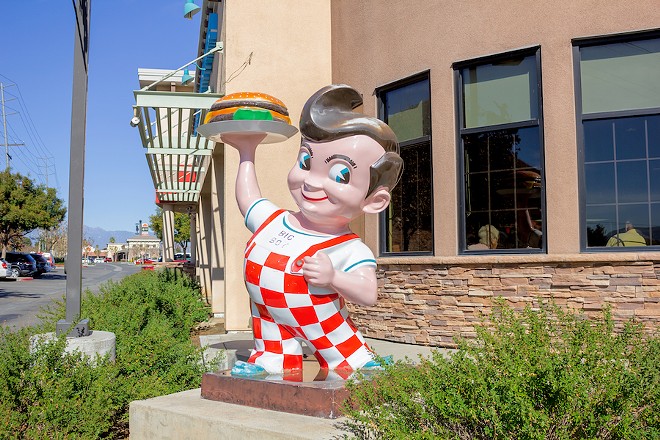 We've always believed the curious smirk plastered on the lacquered faces of checkered pants-wearing hamburger-obsessed Big Boy statues throughout Michigan (and parts of California, Ohio, and North Dakota) is proof that Big Boy is up to no good. He's a Big bad Boy.

And, apparently, so is Troy Tank, a part-owner of Sanilac County Big Boy restaurant who launched a GoFundMe campaign to support the fines associated with his decision to continue dine-in service despite, you know, a pandemic. In Sanilac County, COVID-19 cases have doubled since October.

“I just felt like our back was up against the wall and we needed to do something about it,” Tank told MLive. “We just want to be left alone. We just want to take care of our small-town community.”

Tank, who is also a part-owner of a Sandusky Big Boy location, launched the crowdfunding campaign on Monday to support the $1,000 daily fines he claims are associated with Sanilac County Health Department's cease-and-desist order.

This deep-fried act of rebellion, er, “patriotism,” comes just over a week after Gov. Gretchen Whitmer and the Michigan Department of Health and Human Services announced a three-week emergency order that prohibits dine-in service in restaurants (though takeout and outdoor dining is still allowed) and asked Michigan residents to consider forming small social circles, or “pandemic pods,” to help limit the spread of the virus due to indoor gatherings.

"We have been issued an order that claims we are incurring fines upwards of $1000 a day because we refuse to shut down and follow the latest 'order' handed down from the MDHHS," it continues. "As true American patriots all of us here at SBB encourage you to join in our fight to keep our most basic everyday freedoms intact..."

According to Tank, the business has not slowed since the order because, well, he has remained open even when it is not legal to do so, which gives him an advantage over his law-abiding competitors.

“We have decided to remain open for dine-in and continue to serve the community and customer base that we love,” the campaign's description reads.

The Sandusky Big Boy isn't the only Michigan restaurant defying emergency orders. Last week, it was reported that Fenton-area restaurant The Meeting Place has decided to keep its dining room open, as has downtown Lapeer's Woodchips BBQ, which also launched a GoFundMe for its staff and surrounding community members in need.

“The decision to stay open was not easy, but it was a team-wide decision.
We absolutely cannot turn our backs on our teammates or their families. Especially right before the holidays,” a Facebook post from Woodchips reads. “So much was taken from us this year, we can’t participate in taking any more from the people we love and our incredible Lapeer County, Michigan community.”

Meanwhile, Jeremy Syrocki, owner of Trenton eatery Truago, used the restaurant and a creepily customized 10-foot inflatable Grinch decoration to make it known that he does not agree with Whitmer's pandemic plan.

“It's our little way of protest with her," Syrocki told The Detroit Free Press. “I thought 'Gretch the Grinch' would be perfect.”

Syrocki hung a sign from the inflatable's neck that reads “Gretch the Grinch.” He also crudely added red lipstick because 2020 is basically 2019's Joker anyway.

For his GoFundMe, Syrocki is seeking $150,000, with the first $100,000 going directly to his staff. Additional donations will be used to support local first responders.

“We don't want to pack the restaurant,” Syrocki told Freep. “We want the opportunity to survive.”

When asked by reporters about the financial toll of the new shutdowns, Whitmer called on President Donald Trump to work with Congress to pass a new round of pandemic relief funds.

"President Trump has an opportunity to meet the needs of the people of this country and extend life-saving support to Americans everywhere," she said. "And I hope that he and [Senate Majority Leader Mitch] McConnell and [House Speaker Nancy] Pelosi can deliver a recovery help for unemployed workers, small-business assistance support for locally owned restaurants and all restaurant workers, and resources to give our kids the educational support that they need. This stimulus is critical for our families and good for our economy."