Mike Ransom has a deserved reputation for doing everything right, and he ups the ante at his new izakaya in Corktown. The Official Tokyo Travel Guide tells me that the word izakaya is made up of three kanji with the meaning “stay-drink-place.” I love that — it's a pub with good food (since just about all Japanese food is good food), intended for you to unwind with friends or coworkers after work. There's a lot of drinking in Japan, and a lot of work to unwind from.

The original Ima (meaning “now”) opened in 2016 across the street from the new izakaya, immediately winning fans for its noodle soups and rice dishes. Now the tiny starter restaurant has been swapped for the space that used to be Gold Cash Gold. The original pawnshop's battered sign is still there: “General Public Loans, Money in 1 Day.”

The new Ima has retained Gold Cash Gold's décor: the beautiful stained glass wall in the foyer, the giant eagle on the floor (reclaimed from a middle school gym), brick walls painted white, house plants on shelves, a ceiling of reclaimed wood formed into chevrons.

The thing about Japanese food is that it can be both delicate (up to a point) and rib-sticking satisfying, in the same dish. A fat udon noodle, slurped out of a spicy broth, is comfort food supreme, but Izakaya's udon soups are mostly vegetables, with the protein more of a condiment. You feel satiated but reasonably virtuous.

Those soups are a small part of a long menu that includes noodles not in soups (yaki udons — pan-fried, no broth), 23 hot and cold appetizers, rice bowls, skewered proteins and “market cuts” of Chilean sea bass and New York strip (with fixed prices, $24 and $26, below what many establishments are charging these days). They're Japanified, with, respectively, a miso-yuzu glaze and a ginger-soy butter sauce.

But I stuck with the more traditional Asian fare, including pho and dumplings.

To start at the start: it's hard to choose among 23 starters, ranging from pickles and edamame to steamed clams and beef tartare. Shrimp-scallion dumplings are a perennial crowd-pleaser and me-pleaser, five of them with crisp exteriors and a tart chili-black vinegar dipping sauce. 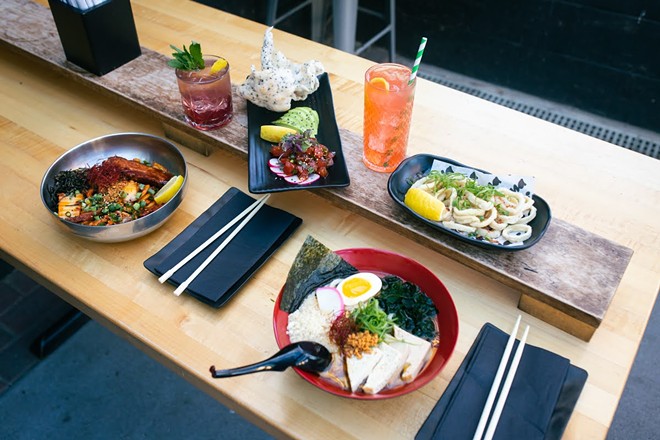 Also good is chicken karaage, a hit at Ransom's Supercrisp spot in Midtown. The crunchy exterior of the nuggets is achieved through two bouts of deep-frying, after a 24-hour marinade and a bath in a non-gluten starch mix. It's served with Japanese Kewpie mayo on the side, made with yolks only, four vinegars and MSG, but no sugar: more umami.

I found a skewer of kurobuta pork sausages less interesting — like hot dogs, really — and only three of them. Better to have chosen the asparagus and smoked trumpet mushroom skewer, or fish jerky or pork belly. As I said, you will not lack for choice.

The three versions of yaki udons are miso butter, kimchi and teriyaki, The eminently slurpable thick wheat noodles are fried and served with greens, shiitake, scallions, shallot, chili threads, lemon and nori, nori being the most noticeable taste, the flavors blending as you progress through the dish. Pork belly, one of the optional $4-$6 proteins (also charshu chicken, beef short rib, chili shrimp, roasted tofu) was delectably tender.

The meat can be tricky with chopsticks for us Westerners, of course, but persevere. Such was the case with beef pho in a big stainless steel bowl, which blended ginger and Thai basil flavors expertly, both of them infusing the beef.

Another night I ordered a udon chicken broth soup called ginger tori, with short rib, an egg this side of hard-boiled, scallions and wakame (seaweed). I would have liked more ginger taste and less wakame (but wakame is inherently strong). Ransom has also brought over his popular vegan Porcini Forest udon soup from the old Ima.

Seven rice bowls include barbecued eel or eggplant and a Korean-inspired Fried Egg Boombap with kimchi. My companion tried the smoked salmon bowl and we scarfed it, but again, my choice would be more smoked salmon flavor and less seaweed.

The alcohol is extensive at Ima, as befits a stay-drink-place. I couldn't tell whether some patrons were truly whiling the evening away in izakaya fashion, but the elements to do so are there.

Some cocktails are low-ABV and there are mocktails. The ingredients lists are lighthearted — toasted coconut mezcal, lychee liqueur — more than your serious whiskeys. A “Rhinestone Cowboy” of St. Germain, juniper-infused sake and tonic was astringent, with a big spray of rosemary. The tall “Club 47” sports dried pineapple and mint leaves, with a mostly coconut flavor. Ransom designed a cocktail, the Ima Peach Press made from gin, peach, quinine and lemon, and North Pier Brewing in Benton Harbor cans it for the Ima chain. The 24 sakes are described the way wine connoisseurs do it — such as “apple, melon, round, bright” — and I won't pretend to say more. Beers and wines are from all over, Italy to Quebec to Missouri (Bud).

For dessert, I love the way Ransom throws an herb into the sweetness. Coconut Tofu Custard is light and minty with a base flavor like warm vanilla tapioca, some blueberries and a sprinkle of cocoa crisps; it's not too many flavors. And the Chilled Cream Cake dresses up a tender yellow cake with strawberries, whipped cream — and Thai basil.

Raised by hippie Zen Buddhist parents near Traverse City, Ransom says Japanese is his comfort food. He grew up cooking for his siblings using high quality miso, mushrooms, kelp, tempeh and tofu imported from Japan. When he opened his first Ima, “it made everything full circle. It was natural to me.” 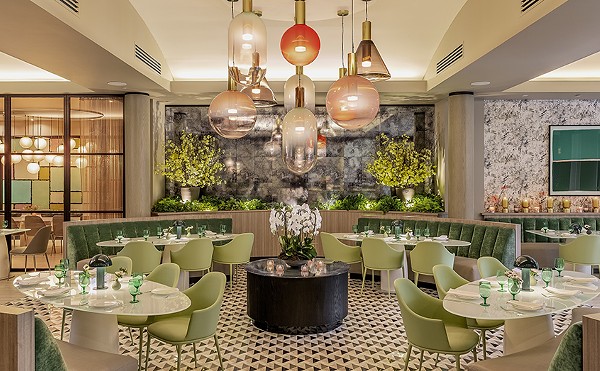