Detroit’s Frita Batidos serves up burgers, fries, and milkshakes — with a fabulous twist 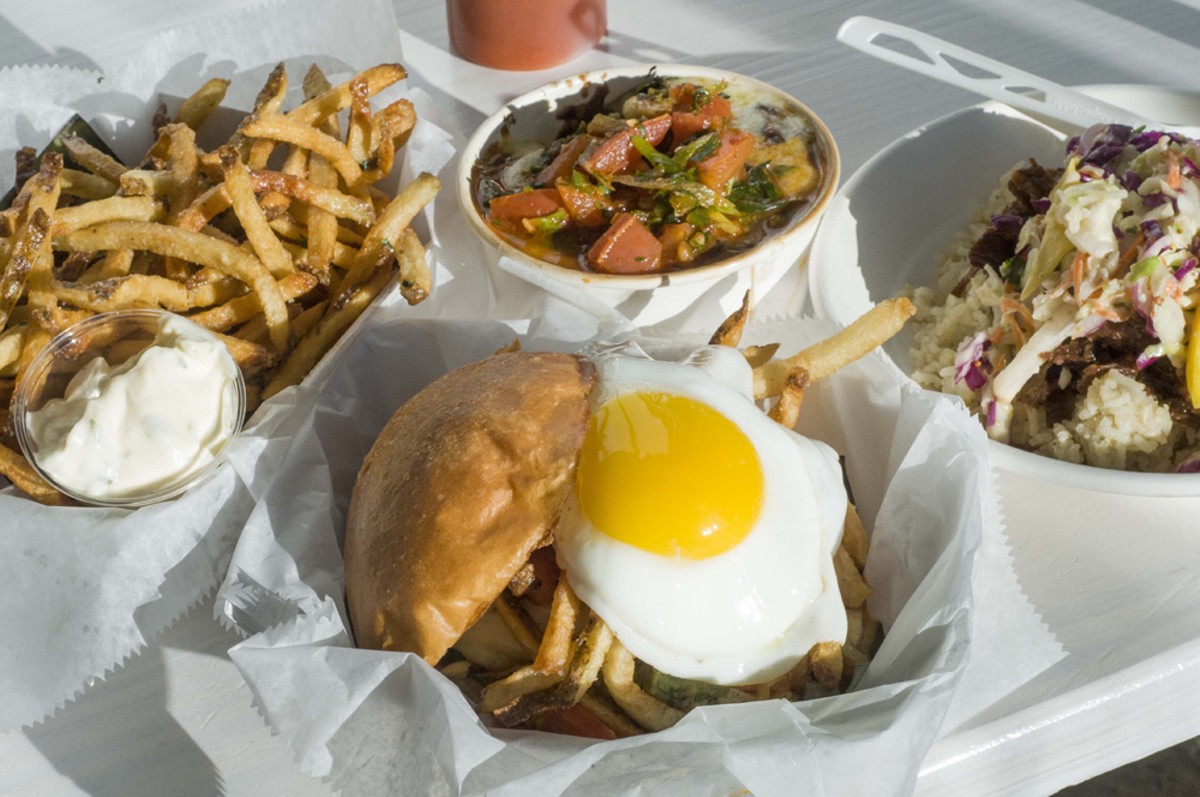 It's easy to get confused by the name. It's nothing to do with Frito Bandito, the cartoon mascot for Fritos corn chips, much less Frida Kahlo. Frita Batidos is "Cuban-influenced," not Mexican. "Frita" means "fried" and is, says owner Eve Aronoff, what the Cubans call a burger made of chorizo, with shoestring fries.

Aronoff opened the Ann Arbor Frita Batidos in 2010 and is careful to say that she's not Cuban and that "this is not a Traditional Cuban restaurant." It was childhood visits to Miami that first introduced her to the cuisine, and she took off from there.

The other half of the name, batidos, refers to a milkshake made with fresh fruit, crushed ice, either vanilla ice cream or sweetened milk, and optional rum. So you have the quintessentially American burger-fries-milkshake combo but reimagined — fabulously.

I'll say right off that I like my buns a lot firmer than the soft egg bun that Aronoff borrowed from Cuba. But if you like softies, or if you can get past the squishiness, as I did — you'll love the chorizo, chicken, black bean, beef, or fish burgers. Each is topped with sweet chile, lemon-scented or chipotle mayo, and a very generous heap of shoestrings under the top giant-sized bun.

The chorizo is made in-house with pork from Fairway Packing in Eastern Market, which manager Paterno Johnson extols for its humane practices. (It was Fairway meat that the Ann Arbor Frita Batidos used when it won the Burger Battle at Eastern Market two out of three years.) The restaurant adds chipotle purée, a chili blend, garlic, and red wine. Yet there's nothing at Frita Batidos for the timid palate to be wary of.

"Everything is more flavorful than spicy," Johnson says.

I recommend the cilantro-lime salsa as a $1.50 frita add-on. Another is a fried egg, which I tried on the slightly spicy chicken frita; other additions are Muenster, slaw, jalapeño, avocado, or bacon. I found the black bean burger less interesting; more of a generic spicy taste. Another sandwich is the meat-addled "Inspired Cuban": roast pork, bacon, ham, Comté cheese, cornichons, and chipotle mayo on crisp and buttery Cuban bread. The bacon is the most assertive flavor here.

"The Best Snack Ever" is a lot for a snack: coconut-ginger rice layered with black beans, melted Muenster, and cilantro-lime salsa. Chopped tomato plays a surprisingly large and welcome role, and the spice of the beans is softened by the coconut.

Other snacks are crisped plantains, which are not sweet and really just mildly interesting, and twice-fried plantains, which are the ripe ones, with all the sugar that implies. They're served with garlic-cilantro butter; it's hard to decide in each bite whether to let the luscious plantains shine alone or to enhance them.

Coconut-ginger rice can be ordered either on its own — I'd say it has the right proportions of both ingredients for a side dish, not too strong — or in a bowl (2019's watchword: Everyone Must Serve Bowls!). The bowls can feature pulled pork, chicken salsa verde, or ropa vieja, which is barbecued and shredded beef brisket, all with "tropical slaw." For rice, you can substitute salad or a brioche.

Come summer, some may want to visit Frita Batidos just for the drinks. For one thing, it will have outdoor tables on the Ilitchville pedestrian walkway between the Fox Theatre and Little Caesars World HQ. (Right now, the walkway sports a lot of empty storefronts, but the plan is for a bunch of retail.) That goes for both alcohol and other drinks. I had a tequila-ginger-lime tumbler, where the grated and squeezed ginger blew a gratifying hole in my head. Sugar crystals added at the end make the texture interesting. There are Cuba Libres, of course, and mojitos, margaritas, piña coladas, and daiquiris — the Cuba Libre is $3 during happy hour.

I loved the batidos, which are thick enough to derail dinner. I had a coconut cream batido with a $2 shot of Myers Dark Rum and a "chocolate español" dusted with cinnamon, each served with a paper umbrella. The latter is made with semisweet, bittersweet, and milk chocolates, and vanilla bean ice cream. Other batidos are fresh lime, hibiscus, and passion fruit. Another night, an over-sharing companion mentioned to the server that he had a headache, and she gifted him a sprightly glass of ginger-lime juice.

For dessert, you can get plantains rolled in cinnamon sugar, which seems like gilding the already super-sweet lily, but I recommend the crisp churros, some of the best and largest I've had. You can taste the orange zest in the batter, and you can dunk them in thick and creamy chocolate español if you desire.

It seems more and more restaurants are trying to make life easier for their customers who have specific dietary needs or desires. Aronoff and Johnson do so with a guide on the back of the menu, grouping the items that are vegetarian, vegan, soy- or nut-containing, gluten-free, and dairy-free. They go it one further by singling out the spicy, the "delicate," and the "no garlic." Guests can ask for preparation in a dedicated vegan or gluten-free fryer.

The drinks menu goes further by suggesting food and drink pairings. I wouldn't eat my churros with a fruit rye ale, as suggested, but on my own I came up with the recommended chicken frita meets tequila-ginger-lime tumbler, and yes!