Under new ownership, Ferndale’s iconic Como’s embraces its identity (after a fabulous makeover)

Courtesy of Como’s
The more things change, the more some things stay the same — the best patio in Ferndale is back.

The corner of Woodward Avenue and Nine Mile is looking quite different lately. After being closed for all of last year, the iconic Como's restaurant opened to the public at the beginning of May, sporting a fresh coat of pastel-colored paint. A mural on the patio seems to illustrate the dramatic transformation, depicting a dapper man transforming into a drag queen.

"I didn't want to goof with the patio too much," says restaurateur Zack Sklar. "People already loved what it was."

Other things haven't changed, however. The restaurant's iconic star-topped sign remains. Not only that, but Sklar leaned in, spelling it out in bricks on the Woodward side of the building.

For some, the choice to keep the Como's name might be considered a bold one. Though the restaurant had been a Ferndale fixture since 1961 under multiple generations of the Grego family, the restaurant had a rough last few years. Starting in 2016, the Oakland County Food Service Appeal clamped down with a string of health code violations, eventually revoking its license in 2017.

But for Sklar — whose Peas & Carrots Hospitality purchased the building for a reported $3 million — the choice to keep Como's, well, Como's was a no-brainer.

Sklar says he was a bit too young to have enjoyed Como's in its heyday, but he says he could sense that it was an important part of the fabric of Ferndale.

"The restaurant had so much goodwill, I think, with the community for the majority of its life," he says. "It's recognizable. You say 'Como's' and people know where it is. It had nostalgia." 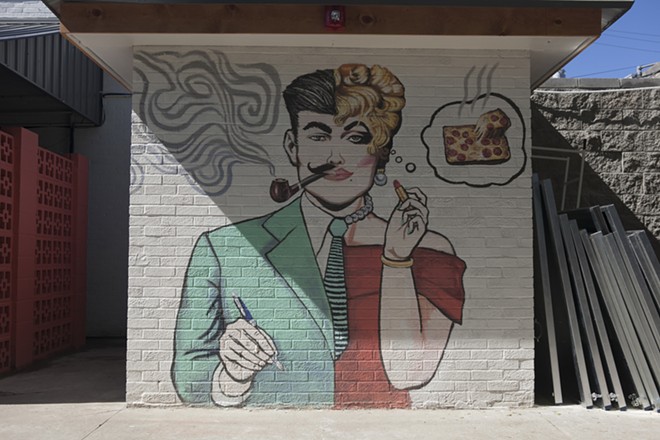 There was also a more utilitarian reason for keeping the name, too — the power of a well-established brand identity. Sklar says he learned this from his Mex restaurant in Bloomfield Hills, which was built in a former Big Boy restaurant. Even though the Big Boy had long closed, people still referred to it — it had become a neighborhood landmark. For another project, Sklar refurbished Bloomfield Hills' former Bojack's, renaming it Beau's Grillery as a throwback to its original name.

Fifty years in business is an eternity in the fast-paced restaurant world, so clearly something was working. For Sklar, it's all about tuning into what works — and then reinventing the wheel only if you have to.

As far as reinventing the wheel goes, Sklar did just that when he decided to swap Como's typical round pizzas for his take on the legendary deep-dish Detroit-style square pizza, a local delicacy which had been getting — and imitated — by on the national stage during the past few years.

"I grew up eating Buddy's," Sklar says. "So my advantage is that this is my pizza."

Sklar tweaks the formula by starting with the dough. Here, he says it's a three-day sourdough mix. "What's interesting about foods like pizza is you can't hide behind," he says. "I mean, pizza is made up of dough, sauce and cheese, right? And so, so it's all about the ingredients and the technique."

Beyond that, Sklar says the cheese is a blend of high-quality European and Wisconsin cheeses. Sauce is applied with some restraint. Pepperoni is hand-cut, as is the pineapple. The result is a slice that's lighter and crispier, yet could very well vie for a spot in the pantheon of Detroit slices like those of Buddy's, Loui's, Shield's, or Cloverleaf.

"Just everything has an extra layer of love and, and quality," he says. 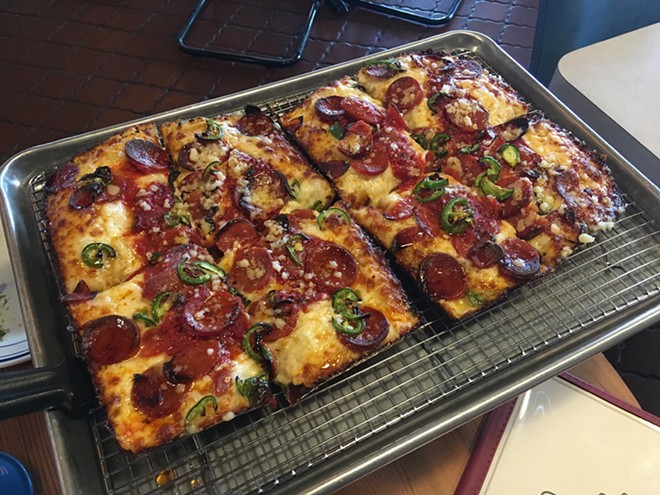 This is evident in a pizza like the LGBT (spinach, garlic, bacon, tomato), named in honor of Ferndale's identity as the closest thing metro Detroit has had to a gayborhood since Palmer Park's heyday ended in the '80s and '90s. Aside from the drag queen mural on the patio, the restaurant's grand opening was billed as a "coming out party," with proceeds benefiting Ferndale's Pride celebration and the Ruth Ellis Center home for runaway LGBTQ youth.

Como's, which established itself as a fun hangout for people of all walks of life, was a big part of the city's LGBT identity, thanks in part to events like lesbian-friendly ladies nights on Sundays and Wednesdays. Sklar says he plans to bring back other LGBTQ-friendly programming, like drag queen brunch, and dance DJs on the patio.

"I think it's one of the institutions that put Ferndale on the map as being a progressive community," Sklar says. "And that's something that I look up to, and I think was very risky for them," he says. "They were so far ahead of their time, they didn't even know it."

But with LGBTQ causes now much more embraced by the mainstream, Sklar says he doesn't want the new Como's to be thought of as just a gay bar.

"It was never a gay bar or a straight bar," he says. "It was a bar for everyone."