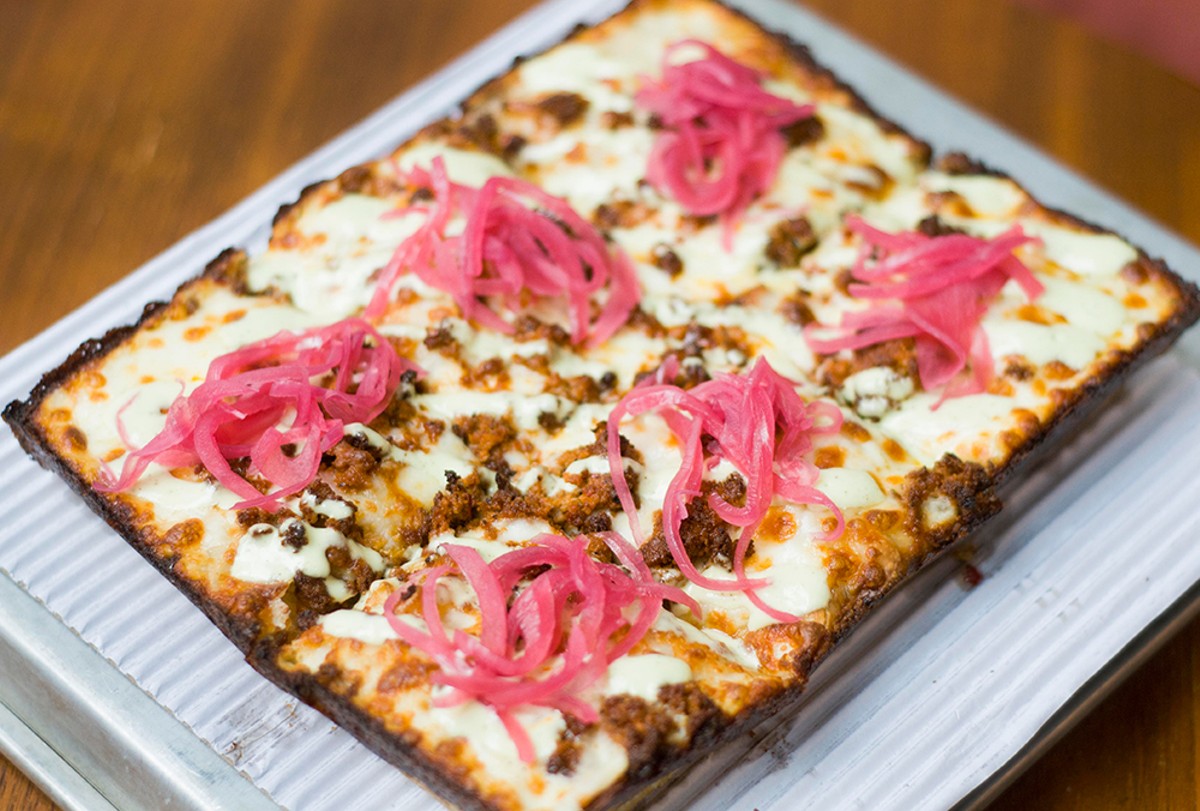 To eat Detroit-style pizza at Fort Street Galley, with its clever bar, get there by Nov. 24. After that, Michigan & Trumbull owners Kristen Calverley and Nate Peck will be moving out of the incubator to their own place in Corktown, 1441 W. Elizabeth St. It's very, very close to the pizzeria's namesake intersection.

Michigan & Trumbull is taking over a refurbished garage next door to McShane's, and Calverley says the goal is to have it look "like a neighborhood pizzeria that had been closed for years and then we opened it and dusted everything off." To that end they've used reclaimed wood from Woodward Throwbacks and used tile from Construction Junction.

The Galley, on the other hand, where the pair has been slinging pizza since July, is an upmarket food hall where four restaurants share the dining area and the bar is run by the Galley owners (as we know, most of the profit in a restaurant comes from the alcohol). They've seen a half dozen good restaurants cycle through since opening at the end of 2018, with the goal that each should stay less than a year, learning the biz before moving on. Michigan & Trumbull is the sixth.

We're no strangers to deep-dish square pizza, of course. A Detroiter might ask, why not just go to Buddy's? (Or to its longtime competitor Shield's, recently returned to the city.) The answer would be in the toppings, where Calverley and Peck have gone out of their way to up the ante. They are native metro-Detroiters who first wowed Pittsburgh with a restaurant they nostalgically named Michigan & Trumbull, but came home to try their hands in this much more competitive scene. Competitive for deep-dish pizza, that is. 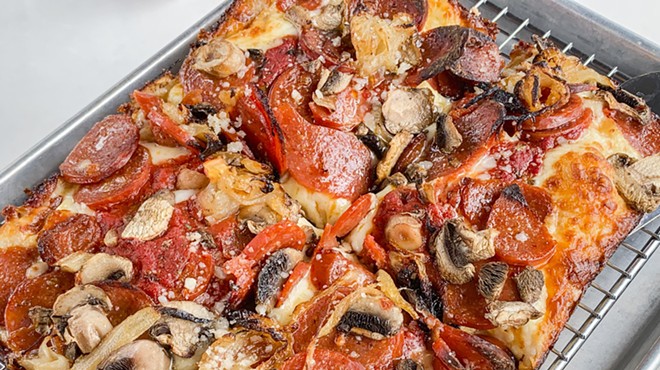 The flavors in the M&T toppings are like their own good selves but multiplied. In the "Bagley Chorizo," for example, the housemade chorizo is like uber-chorizo: more red wine vinegar, more paprika, cumin, and oregano — and plenty of pink pickled onions are sprinkled atop. In the "Packard Pepperoni," the sausage is smokier, more intense than the usual, and the slices curl into little cups, which makes them seem to hold more flavor still.

The chefs have wisely kept the choices limited; trust them that the combinations are well constructed, though you can build your own if you like, or do half-and-half on the 8-inch by 10-inch rectangles. The Packard actually adds a drizzle of hot honey, infused with red pepper flakes. The "St. Aubin Sausage" uses a very fresh tomato sauce — just tomatoes and salt — and crisp broccoli. Like all the pizzas, it has the homey bready bottom and crisp edges we love. Calverley thinks theirs is airier than most, but I didn't see that.

I liked the white options, each of which showed some noticeable lemon. "Woodward White" uses dollops of ricotta but then adds red pepper flakes, garlic oil, and lemon zest. The result is a mix of bland and stimulating, depending on where you bite. "Farnsworth Funghi" is similar but with mushrooms and whipped goat cheese instead of ricotta. I liked the tart cheese but thought the mushroom taste wasn't evident enough.

My vegetarian friend raved about the vegan option. For $8 you can have any or all of mushrooms, broccoli, banana peppers, tomatoes, pickled chilis, black olives, pickled onions, white onion, or green pepper.

A gluten-free crust made with tapioca and brown rice costs only $1 more.

Michigan & Trumbull especially shines with its salads — no iceberg-cucumber-tomato eyesores here. Both are plenty for two people. The bitey arugula is sprinkled with visible lemon zest and shaved Parmesan and taken up a notch by the house vinaigrette made with lemon, red wine vinegar, and red pepper flakes, so it's a little hot. The antipasto is wonderful with ham and pepperoni, yellow hot peppers, and black olives on an arugula base, but I wish they hadn't diced the mozzarella into tiny, tiny cubes.

Another side is "Teader Fries," which I didn't try because they involve two of my least favorite flavors: a barbecue-chip spice rub and cilantro ranch sauce on the side. They're named after a deceased friend, Detroit street artist Tead.

Calverley and Peck don't yet know when their Elizabeth Street location will open, because of — yes, you guessed it — delays in the liquor license. In 24 years of restaurant reviewing, I have yet to hear of a place that opened when its owners thought it would. They may open without the license, but they say everything should be up and running at least by the end of the year, if not before. Check their website for updates.