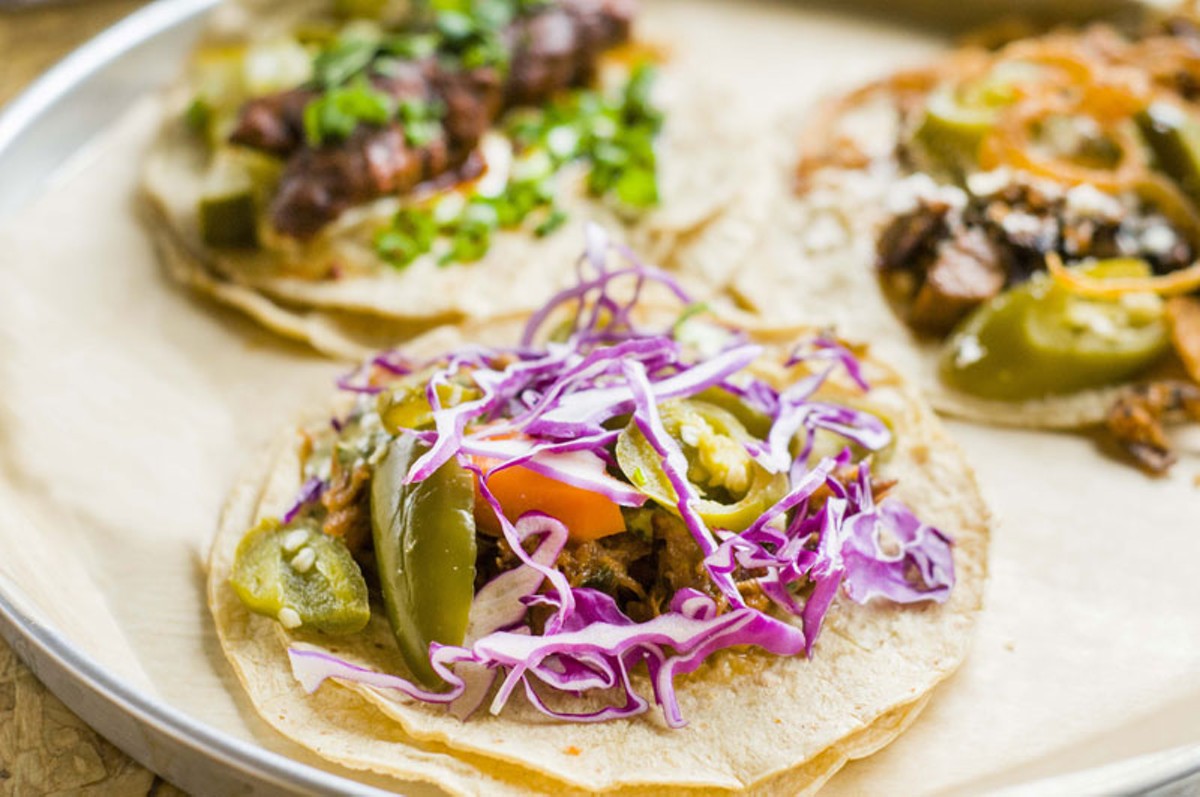 Up until now, it's been the custom of the Union Joints team to create new restaurants by repurposing interesting old spaces: a fire station, a gas station, an 1840s Baptist church. Refurbishing a Hooters is a departure — but hey, what restaurant needs to be replaced (abolished, smashed) more than the original breastaurant? For Gran Castor, owners Curt Catallo and Ann Stevenson retained the round fireplace and the hood above it in Hooters's signature orange, but otherwise, no buxom ghosts linger. (Except in the men's room, where Hooters ads still appear. The ladies get a photo of Carlos Santana. None of this is accidental.)

At Gran Castor ("Big Beaver" in Spanish, for the cross street) the pair have expanded on the "Latin food that speaks with an Asian accent" offered at their Honcho in Clarkston, creating a menu that, if not recognizable in any particular Latin American country, is alive with oversized, crowd-pleasing flavors.

Each dish has a lot going on. The bánh mì taco, for example, is pulled pork with Korean barbecue sauce, red cabbage, pickled jalapeño, carrot, and sesame-cilantro aioli. A grilled avocado salad has eight ingredients. It makes it difficult to tease out just what makes each plate so good, though that's not a problem for you nonreviewers. By the way, I know we're not trying for authenticity here, but one option for your tacos is adding melted cheese. Don't.

In any case, I was so hungry by the time we were served that I scarfed wolfishly. Gran Castor takes no reservations. On a weekend night we were told the wait would be 80 minutes; the actual 50 felt merciful. On a weeknight, a projected 35 minutes became 55. The blithe fellow at the podium explained that the "no reservations" policy was "to be fair to everyone." I'm not sure who "everyone" includes, but it's not the customers — yet the place is packed.

Chef Cameron Berg uses lots of Mexican ingredients — queso fresco, tomatillos, black beans, and even masa croutons; red cabbage, avocado, and sweet potatoes also make frequent appearances. He combines them and more wide-ranging elements in tacos, pizzas, salads, fabulous-looking soups, a wide range of appetizers, a few entrées, and a good dessert list, and even classics are sure to be reconceived with a twist. The Caesar salad uses queso fresco instead of Parmesan, and chipotle-lime for a dressing. Even those searching for the most gringo version of Mexican food possible — "Taco Night Taco," with ground beef and cheddar — will find turmeric onions on top. The well-loved Union Joints three-cheese mac and cheese is also thrown into the mix because of course.

The drinks menu is big on tequila, a few mezcals, and margaritas, with Curaçao and matcha versions. I liked a paloma with Jarritos grapefruit soda; there's a "Hot Castor" that sounds fiery, with tequila, cilantro, Thai chili peppers, and a chili powder rim.

For those unfortunate enough to suffer a genetic antipathy to cilantro — the poor souls think it tastes like soap — Gran Castor offers to leave it off if you speak up.

I was surprised to be disappointed in two of my tacos. The curried oxtail, usually a rich dish, was bland, and the bánh mì was unsatisfying. A tuna ceviche appetizer was not fresh, but everything else was exciting. An avocado relleno was grilled and stuffed with sweet potatoes (sweet), olives (umami), and visible chunks of roasted garlic (more umami), with lots of red onion for crunch. It had a pleasant afterburn without ever startling.

The Gran Castor Burrito (ordered by friends; I would have guessed too Tex-Mex) is indeed "gran" — enough for two, with a thick layer of brown mole, and pleasingly complex. The Five-Layer Tamale Pie is rich and sweet with red mole, kale, black beans, cheese, and sweet potatoes in a masa crust. Kale!

The elote pizza, which incorporates corn and roasted garlic butter and comes from a wood-burning oven, was outstanding, mostly because of the Peruvian green chili sauce. Likewise with the Argentinian fugazzeta, in Berg's version more of a focaccia, with Chihuahua cheese, turmeric onions, and epazote chimichurri. This filling appetizer is enough for four.

I made room for a big plate of dense chocolate-orange flan, complemented by a frothy milk chocolate whip and crunchy cacao brittle — everyone should order this. Our server said he would fry our mini-doughnuts himself, and they came back ethereal, for dipping in salted caramel and Mexican spiced chocolate.

There's not space to list all the Gran Castor dishes I wish I'd tried, but some are porchetta, trout, pollo borracho brined in tequila, sticky ribs, four of the pizzas, maybe the rice bowl, all of the soups, and all of the desserts. Next time I'll go in non-prime time.