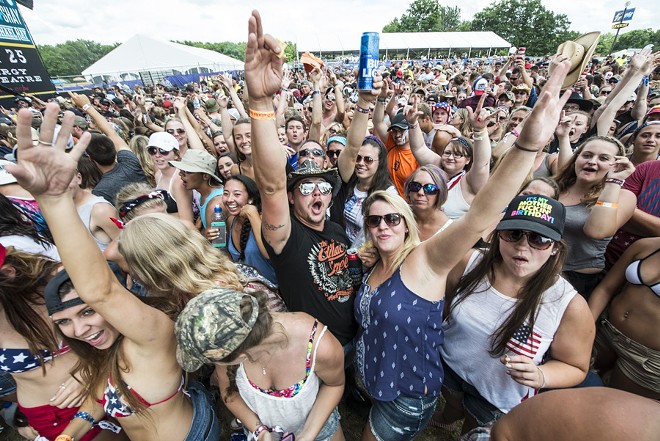 Music festivals — and festival culture — are under a microscope.

Earlier this year, HBO released Woodstock 99: Peace, Love, and Rage, a documentary recounting the horrors of the pre-millennium revival of the once flower-powered music festival, which included arson, violence, multiple accounts of sexual assault, and gang rape.

Most recently, rapper Travis Scott's annual Astroworld festival made headlines. The festival claimed 10 lives, including a 9-year old, during its first night after pleas to stop Scott's performance were largely ignored despite many fans being trampled and crushed by a provoked and mismanaged crowd of more than 50,000 people.

Now, a Michigan-based festival is having its dirty laundry aired out.

The LiveNation-produced fest, which was first held in 2013, takes place in Brooklyn, Michigan, at Michigan International Speedway. In recent years, it has drawn more than 40,000 country music fans, many of whom opt to camp on-site in tents and trailers.

Though the heart of the festival is its star-packed musical lineups that have in years past included performers Miranda Lambert, Jason Aldean, Tim McGraw, Keith Urban, Carrie Underwood, and Luke Combs, Faster Horses is, as it is touted on its website, the #PartyOfTheSummer. At least, for some. For others, it's a nightmare.

Since 2013, there have been 30 reported cases of criminal sexual conduct at the festival, police have responded to 91 assaults, and, during this year's event, four people died: three men died by carbon monoxide poisoning and a woman died as a result of "complications of obesity" with marijuana and alcohol abuse also playing a factor.

According to MLive, which analyzed 130 police reports, 30 sexual conduct cases were considered "unfounded" and at least 18 sexual assault cases involved alcohol. All of the reported assault and/or rape victims are female.

To compare, "Faster Horses has 50% more reports of criminal sexual conduct and more than twice the number of assaults" than that of Michigan's annual large-scale four-day electronic music festival, Electric Forest. MLive also found that alcohol was the undeniable common denominator throughout the more than, 2,000 pages of violent crimes and deaths at Faster Horses.

Throughout Faster Horses sordid history, only two men have had formal legal action taken against them, one of whom was implicated for urinating in public and drinking under age, the other had repeatedly entered the women's showers, exposing himself, and in one case, attempted assault. That man, who was 22 at the time, had initially gotten an 18-month sentence and a handful of community service hours. He ended up spending 93 days in jail because he violated his first sentence. The man then pleaded guilty to the indecent exposure charges, but not the assault with intent to commit sexual penetration charge, which were dismissed by the prosecutor's office.

The report details horrific firsthand accounts spanning the festival's history, including women waking up with blood running down their legs, or are found unconscious and unclothed in fields or tents not belonging to them with no recollection of how they got there. Others found themselves intoxicated and came to during an attempted or completed rape. One woman contacted police after removing a condom from her vagina with no memory of why or how it ended up there. Another was found partially undressed with a busted lip on the floor of the women's bathroom and was terrified of anyone touching her. In 2014, a woman recounted to police that she had been raped by three men after being knocked to the ground in the parking lot. She was in so much distress following the attack, that she was crying and vomiting during the police interview.

These cases are often difficult to prosecute, especially when excessive drinking is a factor and neither party can provide detailed accounts of what happened — which isn't to say it didn't happen, just because someone can't remember. Oftentimes attackers can lie and say consent was given even though the victim was not in a coherent enough state to give consent nor deny it.

One of the many contributing factors is the festival's culture, which revolves around objectifying women, intoxication, and country music's reputation for perpetuating gender roles and that guys will be guys.

According to Rape, Abuse, & Incest National Network (RAINN), out of 1,000 sexual assaults, only 310 are reported to police (which means more than 2 out of 3 rapes go unreported), and of those reported cases, on average only about 28 results in a felony conviction.

This would mean that there could be more than 67 unreported sexual assaults at Faster Horses.

If you are a victim of sexual assault or want more information on sexual assault, you can contact the Rape, Abuse & Incest National Network at 1-800-656-4673; rainn.org.