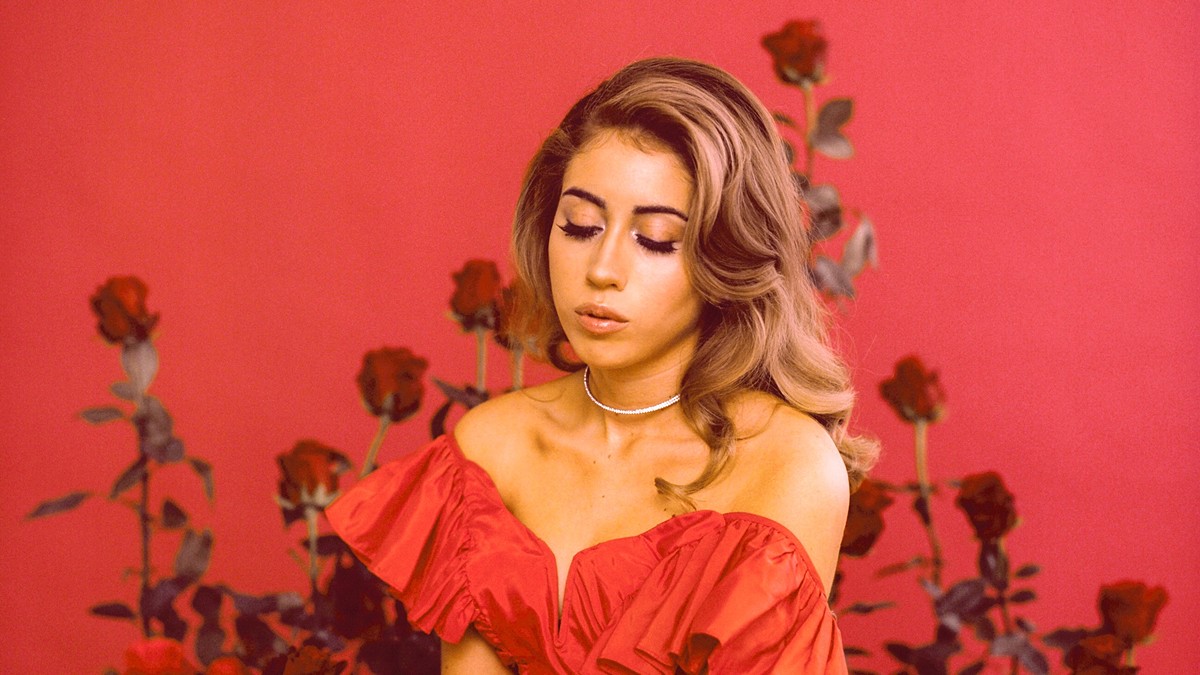 Though filed under the "indie pop-meets-soul singer" category, Karly Marina Loaiza — perhaps better known as her stage persona, Kali Uchis — identifies least with the "songstress" role. Having taken an interest in visual arts, writing lyrics, and composing music since she was a young girl, Loaiza began crafting her aesthetic early on. Armed with natural talent (see also: no formal vocal training), saxophone and piano prowess, and inspired by music videos that flashed on the screen via MTV and VH1, the (now) 23-year old musician had visions of becoming a music video director in her adult life.

Born in Alexandria, Virginia, to Colombian immigrant parents, Loaiza attended T.C. Williams High School (of Remember the Titans fame), just outside of D.C. Though her folks were adamant about Loaiza graduating, she wanted to drop out. Creative curriculum like photography and film classes aside, school wasn't for her. Not because she didn't like learning, but she began to realize that the way she learned differed from that of her schoolmates. Like many artists, she preferred the teach-yourself method, likely due to her inability to focus in a classroom setting (for example, fixating on the uncomfortable room temperature and unpleasant fluorescent lighting), paired with the conflict of someone telling her what to do. Distractions aside, she went on to graduate.

Shortly after, Loaiza dropped Drunken Babble, her debut mixtape via DatPiff.com. The heavily sampled 17-track project introduced her soft, sultry vocals and talk-rap lyrics over a mélange of genres, from hip-hop, doo wop, and classic soul to reggae, new wave, synth pop, and DIY beats. This compilation gave the world a digital dose of the dreamy, nostalgic Kali Uchis style that straddles the fences between tender and tough and vulnerable and empowered. In 2013, she co-directed a music video for Drunken Babble's ninth track, "What They Say," which caught attention and accolades from Snoop Dog, eventually leading to a Los Angeles relocation for the Virginian and collaborations with the rap icon.

In February 2015, Loaiza self-released Por Vida. The acclaimed pastel pop EP is laced with low-rider soul, and features production help from Tyler, the Creator (who she has frequently worked with since) as well as Diplo, Kaytranada, and BadBadNotGood. The same year, she directed and co-directed accompanying music videos including "Know What I Want," "Loner," "Ridin' Around," among others, launching the visual artist in her to the world via the internet.

Her style is like a candy-coated psychedelic trip, dusted with fur-lined accessories, retro cars, neon lights, and milkshake glasses overflowing with sex appeal. At its surface, the mood is frothy and sweet, but when you crack the sugary shell comes undertones of heartbreak and hustling. Loaiza is currently working to complete her debut full-length album, slated for release this year, and is kicking off her first-ever North American tour this week.

Metro Times: Your parents are immigrants. You have a tattoo of your father's passport signature on your arm. Given the current political climate in the U.S, and President Donald Trump's recent decision to end DACA, do you feel a certain responsibility as a young female Colombian-American artist right now?

Kali Uchis: America was built on immigrants. At this stage, I'm just spreading awareness. Usually whenever anything happens I share and try to do whatever I can.

MT: You've mentioned that you've run into obstacles while creating your new album, one of them being yourself.

MT: How do you deal with pressure?

Uchis: You just learn to let go of the shit that you can't do anything about. I feel like I used to stress so much about everything, but you just kind of have to accept it. Not everything happens when you expect it; it is what it is. The people who ride with you, ride with you.

MT: Tell us about growing up in Alexandria, Virginia.

Uchis: Five minutes outside of D.C., there's the DMV (an acronym for the District, Maryland, and Virginia). From what I've seen and heard, it's very different from the rest of Virginia. We're right outside of the city so it's kind of like its own little world with its own culture, lingos, and styles. And my high school was known for its diversity. Lots of immigrants from all over the world, lesbians, gays, trans, bis. I think because I grew up like that, and, even though my family is Colombian — which I know families there who are more traditional — but my family comes in a lot of colors and has a lot of gays, and trans, and lesbians and stuff, so I grew up in a very open home. My parents were very, like, you can grow up to be whatever.

MT: What do you mean "whatever?"

Uchis: My parents always thought I was going to grow up to be a lesbian. When I was little I went through a lot of phases, like any girl. Normal stuff. But to them it wasn't. They saw me spending time with my girlfriends. We'd be together all the time and take showers together and stuff. So my family was like, "You know, when you're ready to come out, you're free to do that. We're here for you." And I was always like, "No, I'm not a lesbian. If I was, I would come out to you." [Laughs.]

MT: We have to talk about Showgirls. I saw on your Instagram story that you feel unsettled by the ending of the film. And currently, Cristal Connors is your profile photo. Is she someone you identify with?

Uchis: Yeah, I love her. [Laughs.] When I went brunette I was looking at all her looks and I was like, "Yeah, this bitch had looks." I love that movie. But yeah, I felt like the ending was very anti-climactic and it left you like, "OK, is there going to be a second one?" And there was never a second one.

MT: What would you want differently for Nomi?

Uchis: There are just so many unanswered questions for Nomi. That made me angry.

MT: Each time I watch it I hope for a different ending.

Uchis: Yeah. All those things that happened in that movie and you're going to end it like that? We'll never even know what happened to her friend.

MT: It took Elizabeth Berkley a long time to be at peace with that film and come to terms with it in her career.

Uchis: Why? Because of the character she played?

MT: Yes. She was humiliated when that came out.

MT: It was basically an embarrassing role for her.

Uchis: What? She did so good. It's a classic movie. When I was looking about the movie and I saw a lot of people trashing it and giving it bad ratings and I was like, "Are they crazy?" I can see how it's a bit cheesy, but movies like that can be good, too. Even though there were certain parts that were predictable in that old school film way, people looking at it like, "Oh this is a terrible movie." I don't know where they got that from. It touched on so many important things and it's a world that no one else in film has shown, that I've seen.

MT: If you could tell us the three differences between Kali and Karly, what would those be?

Uchis: The reason I made my stage name Kali Uchis is because it's still me in the sense that, my dad called me "Kali Uchis" my whole life. It's still something I've been called since I was a baby. It's still me. I guess if we're saying the "Kali Uchis" who I am today, vs. Karly who was growing up before Kali Uchis turned into Kali Uchis, she's more grown, more adult, more confident, and more sure of herself. Kind of like the girl looking at the woman.