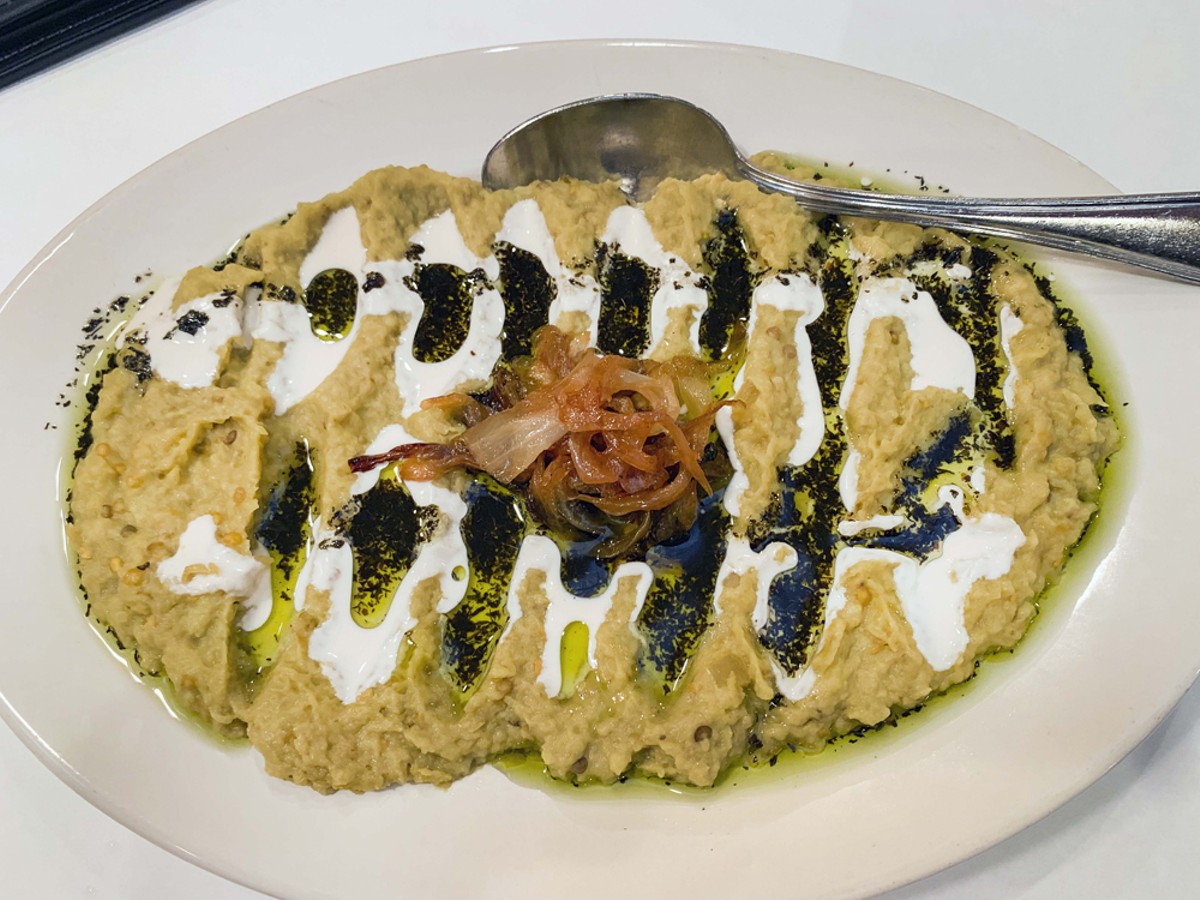 If it's time to eat, there aren't many more interesting and diverse stretches of road than Orchard Lake just north of I-696 in Farmington Hills and Bloomfield. Its miles of strip malls are dense with Indian, Jewish, Syrian, and other restaurants — the area just about rivals Warren Avenue in Dearborn as one of metro Detroit's best food neighborhoods.

That's where you'll find Pars Restaurant, one of the region's few Persian spots. Its dishes are marked by deep flavors, and perhaps the best example of that is the kashk-o-bademjoon, an eggplant dip that's a mix of fried eggplant, sautéed onions, garlic, mint, and olive oil topped with whey and caramelized onions in an artful presentation. Pars co-owner Sam Hossein Rajaee says there's not much else to the plate besides salt and pepper.

But he's a little protective of the spices in each dish, though he insists most, like the kashk-o-bademjoon, are simple in terms of ingredients. As we discussed the menu, he kept telling me, "It's all about the ratio and how you mix it in."

Indeed. Everything at Pars is made from scratch, and that much is apparent in how fresh it is. The restaurant, which opened more than 11 years ago, doesn't serve a huge Iranian population. Rajaee says there just aren't many of the Persian nation's immigrants nearby, so he relies on the area's Jewish residents, Arabs, and others who keep Pars busy.

Know this from the outset: Iranian cuisine isn't Mediterannean fare. Iran's capital, Tehran, is 1,100 miles from Lebanon's Beirut, and the average metro Detroiter won't be familiar with most of the menu. The latter is divided into several sections — kebabs, stews, and rice dishes that hold what are effectively even more stews. There are plenty of vegetarian options, and platters of kebabs for large parties.

It's the kebabs that Iranians often order when they dine out, Rajaee tells me. Stews can easily be made at home, but the kebabs are cooked on an open flame and the process is too complex for a small kitchen. There's little that topped Pars' kouibideh, a charbroiled kebab that's made from ground beef mixed with ground onions, parsley and "special seasonings" that include salt, pepper, and saffron. Pars extracts the juice from the onion, then later returns it to the meat, and that's the sort of technique Rajaee is referring to when he talks about mixing the ingredients just right.

The baghali-polo is a rich stew made with super tender lamb shank cooked over very low heat with tomato sauce, saffron, and carrots. That's served with a massive plate of rice that's green from the addition of fresh dill and lima beans. It's another dish with a ton of depth, and that's partly because of the advieh, a Persian spice mix that varies from kitchen to kitchen but can include things like cumin, cardamom, coriander, turmeric, clover, dried lime, and rose petal.

Advieh is also behind the slightly sweet and sour gheymeh stew, which holds cubes of tender, slow-cooked beef, yellow split peas, saffron, tomatoes, and sun-dried lime. The latter is what accounts for the plate's noticeable-but-pleasant sour elements. Similarly, the fesenjan is a thick stew that's almost more like a dip and holds a deep brown mix of pureed walnuts, pomegranate, pomegranate juice, salt, and a little sugar to temper the sour. Though I enjoyed the flavor, I could only eat a few bites because of its intensity.

The barley soup is among the better barleys out there, as it's made with a tomato broth flavored with advieh, while the ash-e-reshteh is thick with herbs, onions, garlic, red kidney beans, Persian noodles, and spices, topped with aged yogurt and caramelized onions.

Pars offers alcoholic beverages, and the restaurant's atmosphere is slightly upscale. On a recent Sunday, we noticed every other guest was ordering food to eat in the restaurant and at least one more dish to take home, and the waitress asked if we wanted anything to go when we placed our order. I asked why that was. "Some of our guests come from far away," Rajaee said, "and they have someone at home who says, 'You better not have gone [to Pars] and not brought something home for me.'"