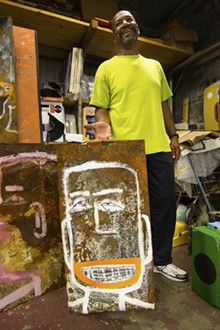 Tyree Guyton asks us to step into his office, and for an internationally recognized artist, his accommodations are incredibly modest. Décor is extremely minimal. We sit on plastic chairs that look like they were donated from an elementary school. A small, square-shaped table stands to our side, with nothing but an old Hewlett-Packard computer monitor on top of it, which isn't even plugged into anything — "Your time is up!" is scrawled on the blank screen in white paint. Hell, the office doesn't even have walls, or a ceiling.

We know we're not really in Guyton's office, but we play along anyway. It's here that he told us to meet him on a sunny September day, and it's the perfect place for our interview. From our sidewalk vantage point we can see most of Guyton's Heidelberg Project, the neighborhood-sized outdoor art installation that he has spent the past 28 years building — and re-building, thanks to recent arsons that have plagued the project for the past year and a half.

Clock faces painted on boards and nailed to trees and telephone poles surround us. Nearby, a boat is piled high with mannequins and stuffed animals. Along the fences of various properties are car hoods with giant, grinning faces painted on them, sometimes along with the word "GOD." Elsewhere, installations are made out of nearly every conceivable found object you can think of — old TVs, shoes, vacuum cleaners. And then there's the colorful polka dots, painted on everything from the street to the neighborhood's trash cans to a white building that is also Guyton's childhood home.

This is the world that Guyton built.

It's also unofficially one of Detroit's top tourist destinations. In the hour we sit and talk with Guyton in his "office," tourists from Ohio, Canada, and even Australia walk by, who Guyton cheerfully greets each time. Pull up to the Heidelberg Project on any given day, and there's nearly a 100 percent chance that you'll spot no less than a handful of photographers, snapping away at Guyton's wonderland — which seems situated somewhere between hope and nihilism.

Like his work, Guyton himself is both comical and a little mysterious. The 59-year-old artist sits across from us in one of the plastic chairs, wearing sunglasses and holding a folder that seems to be filled with nothing but quotes from philosophers, politicians, artists, and other figures, which he consults throughout our talk.

He's also prone to creating his own sort of esoteric logic. When we ask Guyton if it took people awhile to come around to his vision for the neighborhood, he responds with something that turns out to be a sort of mantra that he repeats throughout our conversation.

"What I'm saying here is two plus two equals eight," he says. "It's my way of redefining my reality and getting the people to catch up to it, to grow into it. It takes time. Here, we're creating something so radical, something so different, a lot of people are afraid of it."

Nearly a century ago, Marcel Duchamp wrote "R.Mutt" on a urinal and challenged the establishment by calling it art. Likewise, mere mention of the Heidelberg Project is always sure to ignite a "But is it really art?" debate among metro Detroiters.

"People thought that art belongs in an institution," Guyton continues. "Hello? How do you define an institution? Two plus two equals eight. I can make it up."

And "But is it really art?" is a rather civil hypothetical Heidelberg debate. In reality, the Heidelberg Project is downright polarizing. One needs to look only as far as the reader comments on any of the news articles about the project to see the depths of people's disdain for Guyton's art. To some, it's an eyesore — if not dancing on the grave of Detroit, then at least gleefully painting polka dots on it.

It's a sentiment that might explain why somebody has been systemically burning down Guyton's installations for the past year.

Guyton again waxes philosophical. "Change is inevitable," he says. "Change is part of the creation called life. We have to change with it. And so like after the fire, we had an interesting conversation. You have to pick up the pieces, and you have to do something greater than before. You can't give in to adversity. You gotta become strong and put on your shield and make your mind up that you're gonna become unstoppable.

"If my art is that powerful that it makes somebody burn it down, just wait and see what I'm gonna do next."

Guyton grew up on Heidelberg Street, in what is now known as the "New White House," a polka-dotted house that is the epicenter of the Heidelberg Project. A dropout of Detroit's Martin Luther King Jr. High School, Guyton briefly pursued a career in the military before moving to Oklahoma to try to start a new life there.

He returned to Detroit, though, and in between stints working in the Chrysler Jefferson Assembly Plant and the Detroit Fire Department, he started taking fine-art classes at the College for Creative Studies (then known as the Center for Creative Studies).

It was shortly after this time, in 1986, that Guyton says he had an epiphany.

"In the month of April, I was standing there and I saw it, in my mind," he says simply. "I saw the whole project becoming a work of art. Cleaning up the vacant lots, utilizing the abandoned structures that were here — I saw it."

So Guyton and his grandfather Sam Mackey began to build Guyton's vision. Of course, Guyton says his plans were initially met with plenty of resistance from his neighbors.

"They didn't understand," he says. "Looking back, early on I felt they were being hostile, but now I understand that's human nature — that's what people do when they don't understand something," he says. "We live in a world today where people are afraid of the boogeyman, which is something that we create in our minds. You have to help people to understand that there is no such thing. And it takes time.

"You see the clocks in the tree?" Guyton asks, pointing to one of the clock faces he painted. "Anytime you're doing anything, it takes time for people to catch up to and understand why. I've learned how to be patient. When I first started, I wanted everybody to love it. Shame on me.

"I wanted people to like it right from the very beginning," he says. "That was my own stupidity."

Guyton did eventually get recognition for his project, though. Within two years, he was getting press from People and Newsweek. He appeared on The Oprah Winfrey Show. He earned a "Spirit of the City" award from Detroit City Council, which is strange, because just years later, in 1991, four of his houses would be razed by order of Mayor Coleman Young.

And thus Guyton and city officials became entangled in a love-hate relationship that would last for years. The project scored a $47,500 grant from the city to build a welcome center. Despite this, Guyton's camp felt it necessary to file a restraining order against the city as a precaution. On Feb. 4, 1999, the restraining order was lifted and, within an hour, Mayor Dennis Archer sent bulldozers to raze even more of Guyton's installations.

Guyton says he had moments of fear at that time. "I was in this house here and the world was out here and I thought to myself, 'I'm not going out there,'" he says. "I was in hiding, and wanted to run away."

In hindsight, Guyton says the city was justified in its actions. "At the time, the city owned those houses so they had that right," he says. "I look back now at it and the city did me a big favor," he says. "The city gave me an opportunity to work on those houses when they came in and demolished those homes. They had a right to do that."

Guyton opens up his folder and pulls out a piece of paper. "Something I want to read to you ... something that John F. Kennedy said ...'We must never forget that art is not a form of propaganda. It is a form of truth,'" he says. "This is my truth, and I'm putting it out there. Anytime you're putting your truth out there, it's going to come up against resistance."

"Mmm-hmm," Guyton says. "But even nothing is something."