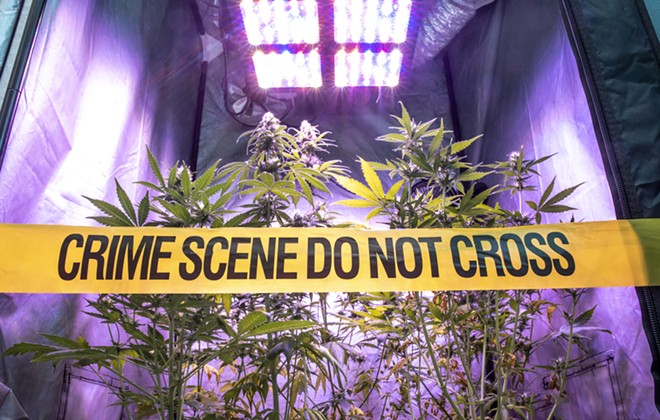 More than six months after voters legalized recreational marijuana in Michigan, more than 10,000 residents who have been convicted of minor pot-related offenses in the past decade still have no recourse to clear their criminal records.

An additional 3,500 Michigan residents are still behind bars or on probation for felony marijuana offenses, according to the Michigan Department of Corrections.

Of the 10 states that permit recreational marijuana, Michigan and Alaska are the only ones that have not created a path to expungement for conduct that is now legal. With even a minor marijuana conviction on their records, residents often face difficulty getting jobs, loans, housing, education, and public assistance.

Alaska's House of Representatives has already passed a bill that would seal low-level pot convictions to make it easier for offenders to get jobs. The legislation is awaiting Senate approval.

A day after Michigan voters elected Gretchen Whitmer as governor and approved a ballot initiative to legalize recreational marijuana in November, Whitmer pledged to take "action early next year" to begin clearing minor pot-related convictions from residents' criminal records. She also pledged to use her office's power to pardon some of the thousands of people still behind bars for pot-related offenses that are now legal or just a civil infraction.

"For conduct that would now be legal, no one should bear a lifelong record for that conduct," the Democrat said at her first press conference as governor-elect.

But since then, Michigan is no closer to clearing criminal records for conduct that is now legal.

In November, Michigan lawmakers introduced two bills designed to expunge pot-related offenses and make it easier for inmates to be pardoned and released from jail. But without a hearing or any action since, those bills have all but died, and about half of the lawmakers who introduced the legislation are no longer in office because of term limits.

Whitmer's office told the Metro Times that the governor "is open to discussing this issue with her legislative partners," but those conversations have yet to lead to active legislation.

"Governor Whitmer does not have the legal authority to unilaterally expunge marijuana convictions, but is open to discussing this issue with her legislative partners to ensure that residents do not bear a lifelong record for conduct that would now be legal at the state level," Whitmer's spokeswoman Tiffany Brown tells Metro Times.

Of the 10 states that permit recreational marijuana, Michigan and Alaska are the only ones that have not created a path to expungement for conduct that is now legal.

The state's inaction has frustrated pot offenders and advocates for social justice reform, especially since Whitmer ran on a pro-legalization platform.

"Something needs to be done immediately," says Barton Morris, an attorney and leading advocate for expunging pot-related offenses and pardoning people who are in jail for offenses that are now civil infractions. "There are people currently serving probation, jail, and prison sentences for nonviolent marijuana-related convictions. Every day that goes by is another strike of injustice to them, especially ones serving sentences for offenses for marijuana-related conduct that is permitted today."

One of Morris' clients — Rudi Gammo, a husband and father of three young children — was sentenced to five years in prison in 2018 after opening a city-sanctioned medical cannabis dispensary in Detroit. Gammo was accused of running a "criminal enterprise" because he allowed people to grow marijuana out of homes he owned in Oakland County for the dispensary. He was doing nothing different than dozens of other dispensaries, but Oakland County law enforcement has been notoriously anti-marijuana since Michigan legalized medicinal marijuana in 2008. During his first year in prison, Gammo was housed with rapists and other violent offenders.

Gammo's children — ages 4, 5, and 16 — are so traumatized by their father's imprisonment that they are getting therapy. Gammo earned most of the money for his family, so now they're struggling to get by.

"He's sad and depressed," his wife, Vida, tells the Metro Times. "He feels like there's nothing he can do. And he has such a big heart. I need my husband around."

Colorado, Vermont, and Washington are pardoning people who are in jail for pot-related offenses. Communities such as San Francisco, Philadelphia, San Joaquin, and Los Angeles County are doing the same.

So far, no Michigan communities have followed suit.

The war on drugs has disproportionately targeted African-Americans and Latinos, even though studies show white people smoke pot at the same rate.

"We may not be able to erase all of the damage that the war on drugs has unleashed on marginalized communities," says Kristen Clarke, president and executive director of the Lawyers' Committee for Civil Rights Under Law. "But it is critical that we give all individuals with low-level misdemeanor marijuana possession convictions a clean slate and a chance to take care of their families free from the barriers to re-entry that they may otherwise face."

Of the 10 states with legalized recreational cannabis, Michigan is one of the only ones to ban pot offenders from running dispensaries and grow operations. Expunging pot-related offenses would "give them opportunities to get involved in the business aspect of this system," says Matt Abel, executive director of the Michigan chapter of the National Organization for the Reform of Marijuana Laws.

Few people know the marijuana industry as well as Chad Morrow, who won awards for the compassionate care he provided at his now-shuttered medical marijuana dispensary in Gaylord. Like more than 100 dispensary owners statewide in early 2016, he was a pioneer operating in a gray area of a law that did not specify whether cannabis shops were legal. While cities such as Detroit and Ann Arbor permitted dispensaries to stay open, police in Gaylord did not and raided Morrow's shop, which he said only sold cannabis products to state-sanctioned medical marijuana cardholders, many of whom were older and had no other way of getting their medicine.

Morrow was sentenced to 1o months in jail on two felony counts of delivery and manufacturing of marijuana.

"I had never been in trouble for marijuana in my life until I put an 'open' sign on my door to help people," Morrow, 39, says. "I didn't know I was doing anything illegal. If I broke the law, it was for helping people get access to their medicine."

With felonies on his record, Morrow has had trouble finding a job. His dream, he said, is to get back in the legal marijuana industry.

"The best feeling I've ever had was helping people when they came in the dispensary," Morrow says.