Fewer Detroiters are experiencing homelessness, but activists charge more should be done 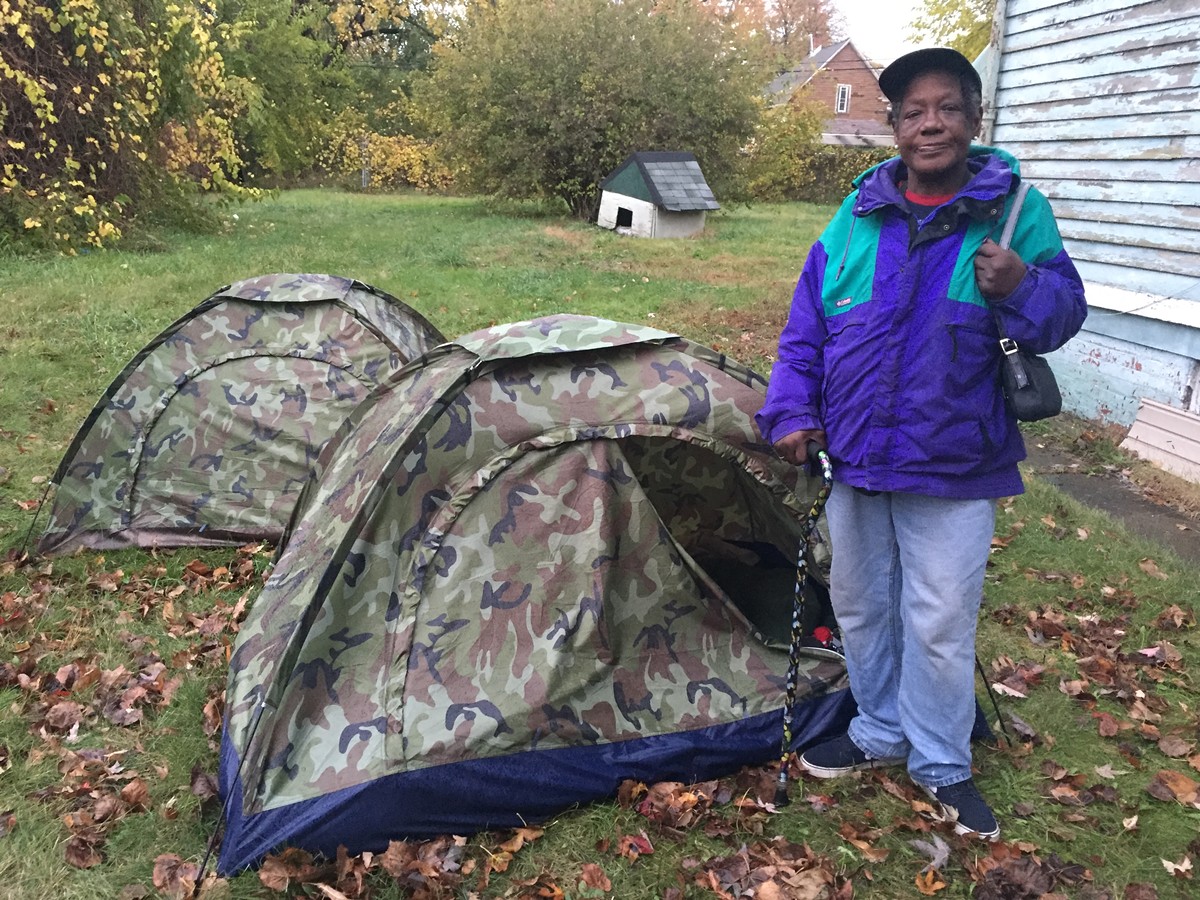 On a mild evening in early November, the mood at Detroit's only known homeless encampment seemed almost blithe.

It was the second of the month, and the few tent-dwellers who weren't out with their monthly government allowance were milling about the community of camouflage tents they call home at Mt. Elliot Street near Mack Avenue, awaiting a choice meal of corned beef and rice. The food, along with the makeshift homes in the encampment known as "Resurrection City," were provided by the Detroit branch of the Southern Christian Leadership Conference as part of a nationwide revival of Martin Luther King Jr.'s "Poor People's Campaign," a demonstration nearing its 50th anniversary.

Perhaps in no place is that revival effort more important than Detroit — the nation's poorest big city. SCLC president Rev. Aaron McCarthy hopes that the sight of the encampment, along with the services being provided to its 25 inhabitants, will compel city leaders to do more to address the needs of poverty-stricken Detroiters — of which there are approximately 242,000.

"If the city won't help them, we will," McCarthy says with a smile.

Set up on land owned by the SCLC, the encampment opened the weekend after the Little Caesars Arena debuted to much fanfare two miles to the west. Resurrection City has thus far received scant media attention and, according to McCarthy, has yet to draw any visitors from the mayor's office. But while it may not be as high-profile as the old downtown-adjacent encampment that cast a shadow over Detroit's post-bankruptcy revival in 2015, it has succeeded in helping streamline the lives of the more than two dozen people who've requested to stay there. Many of them, like Sherry Barringer in Tent 8, represent Detroit's most vulnerable population, the chronically homeless — people who've been without housing consistently over the course of years, and who may suffer from a mental or physical disability that has left them unable to work. Last year, more than 2,100 people experienced chronic homelessness in Detroit, according to the city's Homeless Management Information System.

Every morning when she wakes up, the 64-year-old Barringer limps with her cane for a mile to Capuchin Soup Kitchen, where, thanks to the generosity of another religious organization, the Order of Friars Minor Capuchin, she's able to wash up, use the bathroom, eat, and get a change of clean clothes. She heads back to the encampment sometime thereafter, and spends her day "sitting around, reading books and stuff" until 6 p.m., when volunteers arrive to prepare dinner.

"I try to keep things straight, keep my head together," she says, unzipping her tent to show us a romance novel featuring time-traveling characters.

It's a welcome change of pace in what Barringer says is her fourth straight year of homelessness, a period that until now had been plagued with daily anxieties over where she would lay her head to rest each night.

"I [used to stay] in that abandoned church over there," she says, nodding toward a neighboring block. "They just made it a slop house though. ... They come in there, they do anything, they use the bathroom on the floor, it's horrible."

Barringer, like many of the city's chronically homeless, eschews the shelter system for what she describes as its low quality. "I can't do them floors or them chairs," she says. Of curfews and other rules, "I couldn't deal with those."

The preference for life on the streets puts Barringer and others like her at great risk as the temperatures drop, advocates say.

"We know that if left on the streets they may die," says Tasha Gray, executive director of the Homeless Action Network of Detroit, or HAND. "They also tend to use up a lot of resources because they go in and out of shelters and in and out of temporary housing."

Acting with the belief that only permanent housing options end homelessness, HAND — the agency in charge of administering the Department of Housing and Urban Development's Continuum of Care funds in Detroit, Hamtramck, and Highland Park — has in recent years steered more funding toward long-term solutions like permanent supportive housing and rapid rehousing, while spending less on temporary options like transitional housing and emergency shelters. The change in strategy has helped significantly reduce the number of people experiencing homelessness in Detroit. Last year, the Homeless Management Information System counted 14,100 people as homeless in Detroit, down from 16,000 in 2015. Individual homelessness, meanwhile, has been on the downswing for the past four years and the number of people experiencing chronic homlessness has declined even more sharply — down from nearly 3,500 in 2013 to just over 2,100 last year. This coming year, Barringer is also due to drop off the homeless rolls, as she has recently qualified for the expanded number of beds in the city's rapid rehousing program.

But the news isn't all bright: This year, a January one-night count of Detroit's homeless showed an uptick in the number of people opting to avoid shelters in favor of the streets or places like vestibules and hospital waiting rooms. The unsheltered individuals counted during the so-called Point-in-Time count rose to 220 from 193 the year before. People staying in abandoned buildings go uncounted.

Separately, as the new approach helps reduce individual homelessness in Detroit, advocates say familial homelessness has generally been on the rise due to evictions (thousands of people are affected by the annual auction of occupied tax-foreclosed homes, for example) and a lack of affordable housing options. More than 2,000 adults in families have experienced homelessness in each of the past four years, while the number of children facing homelessness has hovered around 3,000.

According to Gray, there aren't enough resources to help families, a population that is often homeless only temporarily.

"Historically, people who've experienced homelessness have been single males, so a lot of the shelter beds were geared toward that population," explains Gray. "As the population began to change you started to see women, children, and families, and the options have not kept pace. So we'll see vacancies in single beds for men but we'll see where we're having to turn away children and families."

HAND, which receives limited federal dollars, is, of course, limited in what it can do to address the problem. The city, for its part, started applying federal housing grant dollars toward at least one permanent supportive housing project per year following the tent city saga in 2015. It recently helped pay to convert the Coalition on Temporary Shelter in Midtown into 56 units of supportive housing for families exiting homelessness. It has also steered federal housing dollars to a Midtown development for homeless veterans that opened last year, and will help fund a North End rehab to create 26 units of supportive housing for single adults.

Other major cities with more money, however, take additional steps. Last year, Los Angeles voters approved a city-backed plan to authorize more than $1 billion in bonds to pay for the construction of 10,000 units of housing for homeless people. The mayor of Austin, Texas, meanwhile, has been pushing for an increase in hotel taxes to help raise $30 million to create permanent supportive housing for that city's homeless population.

"I believe there should be a place for homeless people to go where it's not like a shelter," says Rev. McCarthy. Noting the tax increment financing plan approved for Little Caesars Arena by the quasi-public Downtown Development Authority, he added, "If there's money to build other things, there's money to build houses for them."

McCarthy says Barringer is one of nine people at the encampment who will soon depart for housing as the weather takes a turn for the worse. After nearly five years on the streets, Barringer says she's most excited for the luxury of privacy.

"A place where I can go and shut my door, don't have to be bothered with nobody!" she says, laughing.

The remaining 16 or so homeless inhabitants at the tent city, meanwhile, will have to make a choice this winter — find a spot, possibly on the floor, in one of Detroit's shelters, or opt to stay on the streets and brave the bitter cold.

If you or someone you know is experiencing or at risk of experiencing homelessness, HAND will host a "Project Homeless Connect" event from 10 a.m. to 2 p.m. on Wednesday, Nov. 15 at the NSO Bell Building Gymnasium at 882 Oakman Blvd., Detroit.

« A teenager’s unnecessary death stokes controversy over race and policing in Detroit   |   Could Betsy DeVos be on her way out of the Trump administration? »