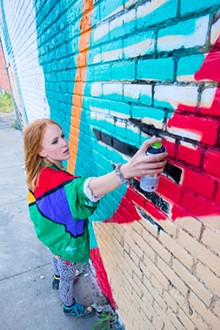 Street art is arguably the most democratic form of art making. From graffiti to large-scale murals, it allows individuals in the community to engage without traditional high art barriers of access like admission costs or stuffy, intimidating museum settings.

And unlike many works in traditional museums, street art has been for the people in the community, rather than patrons from elsewhere.

Thus Detroit Mayor Duggan's recent crackdown on graffiti artists and muralists in the city has yielded a strong backlash by critics. Duggan (who has said point-blank, "I hate graffiti") has transferred his disdain for street art into hardcore policing of graffiti artists and building owners. In the past year the city has fined building owners for having graffiti on their property — even some who had commissioned graffiti-style murals. And dozens of artists have been arrested for tagging long-abandoned buildings.

Of course, graffiti has had a long history of being associated with vandalism, yet by definition it is a defiant and public exhibition. But what Duggan does not realize is that in many cases graffiti and public works of expression may resonate and even serve as an attraction for many visitors of Detroit.

Its history is intertwined with the development of another form of expression that was also initially misunderstood, but now has reached mainstream appeal: hip-hop. And like hip-hop, graffiti has accumulated the high level of commercial attraction as well. Although the lines between graffiti, murals, and street art can get blurry, these works can activate blocks within neighborhoods in ways that no developer can.

That's part of the reason that 1xRUN, an Eastern Market-based art print shop and gallery, devised the inaugural Murals in the Market festival. The ambitious initiative will see commissioned works created by 45 street artists and muralists in Detroit's historic Eastern Market district, kicking off Thursday, Sept. 17.

Eastern Market has steadily established itself as one of the city's most creative communities. Aside from 1xRUN, the district boasts the Red Bull House of Art gallery as well as a smorgasbord of colorful murals, some going back to the 1970s. But Roula David, director of operations at 1xRUN and an Eastern Market resident since 2011, says the intent of the project is centered on the market and supporting local businesses that sell in the community. "Our primary goal for Murals in the Market is to create a moment around public art, to bring a collective of artists from the global mural movement to engage with local artists and to showcase the local cultural scene, from Slow Roll's bike tours to Paxahau's events to Detroit Hustles Harder signature designs," she says.

In addition to the murals, 1xRUN will facilitate artist talks, parties, and panel events. Simultaneously, as muralists paint on buildings throughout Eastern Market, 1xRUN's Inner State gallery will exhibit smaller works by all participating Murals in the Market artists.

Although David says the main premise of the initiative is rooted in the desire to expand awareness about urban farming and fresh food accessibility, many of the artists have additional ambitions in mind for their murals.

Graffiti artist-turned-muralist Fel 3000ft, who recently finished a commissioned work on the north wall of the new HopCat craft beer bar in Midtown, says his primary motivation when painting in Detroit is to beautify the city with public art.

"[Public] art serves as building blocks, bringing people and creative commerce to the city," he says. "Neighborhood beautification is key to the growth of Detroit."

Fel is transparent about the years he spent homeless in Detroit — an experience that unexpectedly encouraged him to become more appreciative of the city and the people in it. "As a homeless person living in Detroit, I've seen some of the kindest nature in Detroiters," he says. "I like to give back to them through my art."

Chicago-based artist Hebru Brantley is another participating artist. Though young, Brantley has reached a level of notoriety that is much deserved. His work primarily tackles tough narratives with whimsical adolescent figures, often in a supernatural state. Japanese anime as well as artists like Keith Haring, Jean Michel Basquiat, and KAWS are influences on his work.

While Brantley is a Chicago native, he is aware of the similarities between Detroit and his hometown regarding youth mortality, crime, blight, and urban economic development. Brantley says with his mural, he hopes to create an inspirational public work that speaks to African-American youth in Detroit — one of the most segregated cities in the nation. "There has to be a space for the African-American voice," he says. "They need to see a reflection of themselves."

Rick Williams, founder and creative director of creative agency the Distinct Life, echoes similar intentions for his 1xRUN mural project. Williams is most known for his contributions to the local and international sneaker culture, having co-founded the Burn Rubber sneaker boutique and creating a sneaker design of his own for Reebok.

Through a collaboration with the Washington, D.C.-based artist Naturel, Williams aims to tackle subtle social points through the Distinct Life's "Talented Tenth" initiative, an effort inspired by W.E.B Du Bois' influential 20th-century essay of the same name. The moniker represents an effort within Distinct Life to designate a leadership class within the African-American community, as Du Bois desired to do in the 20th century. Through this, Williams intends to create a mural that resonates with Detroit's African-American youth in particular.

Williams' intentions for the Murals in the Market project are paralleled to the work he does outside of design, where he facilitates college mentorship initiatives for Detroit youth at his alma mater, Oakland University. "One of my responsibilities is the youth," he says. "We have the responsibility to be great — we want our mural to be inspirational and reflective of the Detroit community and its youth."

Native Detroit artist Sydney James, whose mural project will be located east of the Market near Cutter's Bar & Grill, alluded to the fact that she will celebrating popular African-American music magazine VIBE. "My purpose is to educate and inform Detroiters and transplants of the city that [African-Americans] are here," James says. "Although we may not be portrayed in everything, we are here and we do awesome things."

What is most impressive about the Murals in the Market initiative is the range of artists who will contribute to the project. While some artists are intentional with their approach, other collectives' plans are a bit more conceptual. The Hygienic Dress League, a husband-and-wife duo Steve and Dorota Coy, have been living in Eastern Market since they moved to Detroit in 2007. The artist collective, which is also listed as a global corporation, is known for creating stenciled murals both in Detroit and worldwide on large buildings, which include their signature male and female figures adorned with large gas masks and business clothing.

The mission of HDL is to "self-promote, and leverage interest in Detroit to get business," says Steve. Through this leveraging, HDL critically approaches the implications of corporate structures through political commentary and imitation of these same entities. However, the difference between real corporations and HDL is that HDL does not desire to capture consumers through mass branding for profit and makes no money from their artwork.

While female artists can be underrepresented in the graffiti scene, Murals in the Market has made a point to have a diverse lineup of artists. Noted artists including Ouizi, Miss Van, Taylor White, Michelle Tanguay, photojournalist veteran Martha Cooper, Hannah Stouffer, KASHINK, Sydney James, and Monica Canilao.

Canilao is a craft artist based out of the Bay Area in California. She recently curated a show at Inner State gallery, called Alchemy. Her work is predominantly three-dimensional, adding a unique element to traditional mural works. She plans to collaborate with Market participant Miss Van and Louise Chinn to build out a façade along one of the Eastern Market building walls. The installation will include all found objects — a common medium within Canilao's practice.

"I would like to depict energy of rebuilding, where we can promote restoring waste in Detroit," she says. "Everything I use already has history. I would like to continue sharing energy that artists have already put into the city by using found objects."

Through this diverse array of artists — not only through race and gender but medium, practice, and mission — the Murals in the Market project will stimulate minds and spark curiosity in the thousands of Detroiters who visit Eastern Market weekly. David and 1xRUN foresee Murals in the Market as a fixture in Detroit's cultural future — one of the few democratic ways of engaging the people of the Detroit community with world-renowned artists and their works.

"Over the years we've seen how murals have impacted our community, drive exploration, and give a sense of life in an area that already has a lot of distinct characteristics from the unique businesses to the farmers market," David says. "The murals in Eastern Market have become and will continue to be an aspect of the market experience and visual landscape."

Murals in the Market runs from Thursday, Sept. 17 to Friday, Sept. 25 throughout Eastern Market; see muralsinthemarket.com for more information.