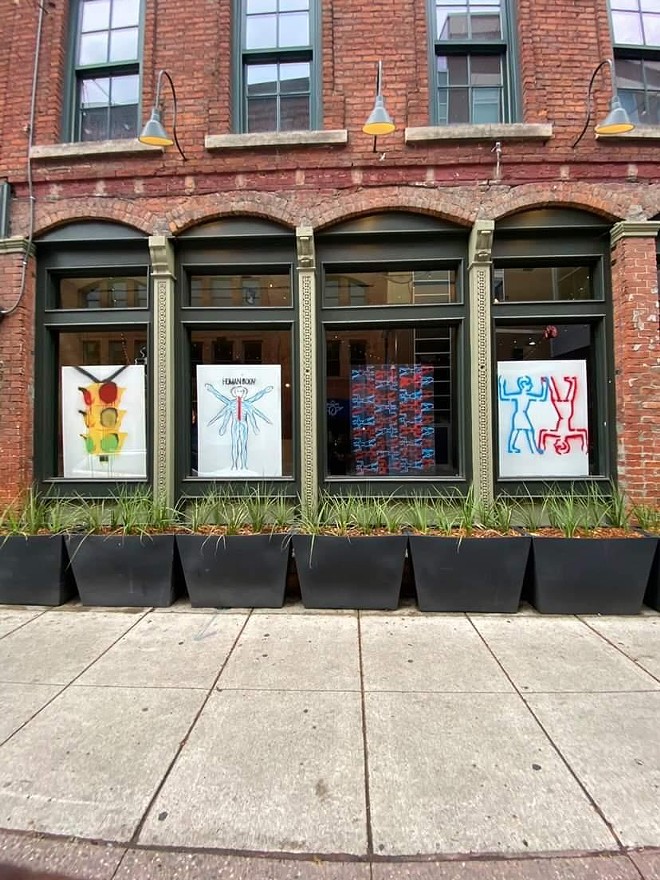 Trent Garcons, 18, of Detroit, and Andrew Judnic, 20, of Grosse Pointe, created new history in a historic building located in Greektown.

The two crossed paths in their creative journeys through mutual friends and social media connections to create a fashion and art pop-up in Greektown’s former PizzaPapalis building. 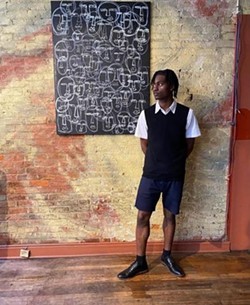 Neither is old enough to remember the original PizzaPapalis that opened in 1986 and permanently closed earlier this year. Judnic says he had never been to the restaurant, but he remembers when his mother would bring home pizza from it.

“I never knew anything about the spot before opening the gallery,” Garcons says. “I got the historical updates from my father and brother. They were like, ‘What do you mean, PizzaPapalis? That’s where all the Detroit playas would be!’ On our first day opening our pop-up, everyone that came in mentioned this being the old PizzaPapalis.”

Judnic says they got access to the space through family connections.

“My uncle knows the owner,” he says. “I had been looking for a pop-up location for a long time. I have been producing merch and selling online and on social media. So I wanted to start doing our own thing. One day my uncle said, ‘You guys can use the space until the end of the summer or until the owners figure out what they will do with it.’”

Once they got the green light for operation, Garcons and Judnic cleaned the restaurant overnight to turn it into a pop-up shop.

“With this spot specifically, there are only restaurants in Greektown, there are no retail shops on the strip,” Garcons says. “We are introducing a new genre of art and fashion. Detroit is not generally looked at as a fashion and art city. Overall the world doesn't look at us in that way. So I want to create a whole new wave for the next generation. Woodward is where all the clothing shops are. But we are in a pizza joint.” 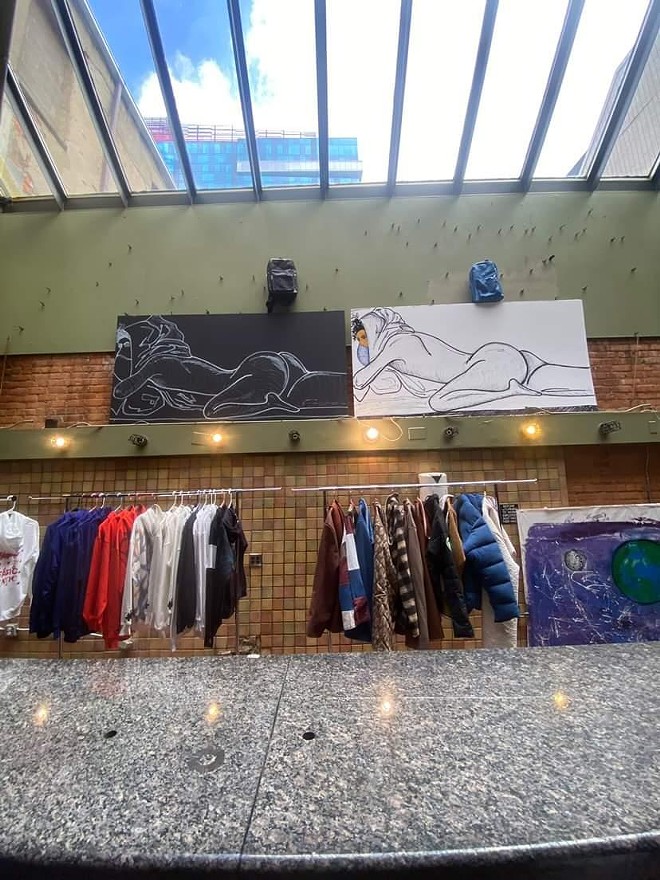 Garcons recently graduated from Warren Lincoln Academy. Born and raised on the eastside of Detroit, he didn’t think about making fashion design a career until recently. His fashion design introduction came from seeing a local fashion brand named Deviate, located in the Boys and Girls club. “I was learning about manufacturing because I knew how to make clothes,” he says, “But I wanted to dive deeper into the fashion scene. I wanted to learn all the ins and out.”

Garcons learned how to seam and made a flannel from scratch for the Lost Artist Collective Detroit-New York fashion show, where he says his piece grabbed the attention of stylists for musical artists Travis Scott and Weekend.

When asked what his dream project is, Garcons says there are two sides. “For fashion, I don’t think of money,” he says. “I love what I do and want respect in the industry for my work. I want to do more collaborations with other brands, and I want to style and design. From the art side, I want my work in museums and available to the public. I want to travel and have my work all over the world. I’m also not one-dimensional. I’m not limiting myself to just fashion and art.”

Judnic says he realized in high school he wanted to become a designer.

“I look at Gucci and big brands for motivation, not necessarily inspiration,” he says. “I want to have original inspiration. I think my best method is just looking around Detroit. Detroit is my inspiration — the art here is very different. I pull inspiration from those spaces. Even the building structures are inspiring.” 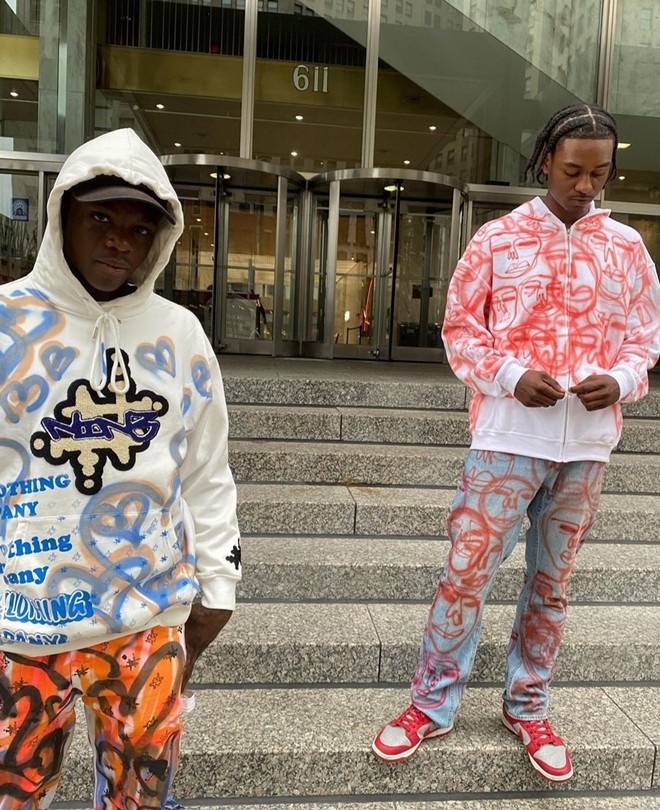 Now entering his second year at the College for Creative Studies, Judnic says doing art is therapeutic for him. He builds almost all of his canvases by hand. But his most significant piece to date that is one that sat in the gallery’s entryway, inspired by the album cover for rapper ScHoolboy Q’s Oxymoron. “My moods inspire me,” he says. “I don’t sit and paint. But I will go and spray paint in an abandoned building. I will draw inspiration from Basquiat and Leonardo Davinci. I like big pieces with lots of expressions.”

Judnic’s imagination is where he draws influence for his fashion. Still, he mentions the late Virgil Abloh of Louis Vuitton and the streetwear label Off-White as an influence. “Growing up, I isolated myself as a child, and my drawings would be hands with faces, buildings with feet, or giant birds,” he says. “So what motivates me is if I want to see an image, I want to be able to do it myself, and I do. A lot of my work is inspired by music — for example, streetwear is inspired by the hip-hop scene. I was a skateboarder and designing clothes — I would print on my jeans and make original T-shirts. People would see that and ask for me to print on their clothes, too.”

Garcons says he was honored to be alongside Judnic. “Andrew has eight-plus years in the game, and I look to him as a mentor,” he says. “It’s cool to have someone here to relate to. Sometimes collaborative partnerships don’t work out, but this fits perfectly.”

Garcon is preparing his designs for the New York Fashion Week runway in the the winter, while Judnic is working on soon releasing his fall collection for Nine Clothing Co.

Amber Ogden is a Detroit native that eats, breathes, and sleeps in the city. She is so Detroit that she is even a die-hard Lions fan — don't judge. She has published work in multiple publications such as Forbes, Chevy in the D, Model D, Every Day with Rachael Ray, and BASIC Magazine. In her free time, she...
More
Scroll to read more Fall Arts Guide articles
Join the Metro Times Press Club