The one-day celebration of the Cass Corridor’s art, culture, and music had been growing every year until it was interrupted 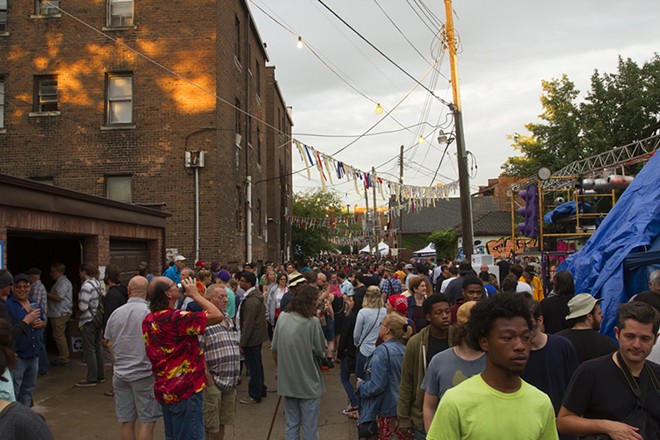 After being canceled the previous two years due to COVID-19, Dally in the Alley, the annual one-day festival in Detroit’s Cass Corridor, will return on Saturday, Sept. 10 with nearly 50 music acts and dozens of art, retail, and food vendors. The largest community-run festival in the city, Dally in the Alley draws tens of thousands of people to the festivities between Forest and Hancock and Second Avenue and Anthony Wayne.

Held since 1977, the block party is a celebration of local art, culture, food, and music in the Cass Corridor. Since its inception, the event has been 100% volunteer-run, with no corporate sponsors.

“We feel a deep responsibility to the old-timers who started Dally,” Adriel Thornton, president of North Cass Community Union, which operates the event, tells Metro Times. “They started this with a purpose and a reason, and there was a tone that was set, and we want to keep that up.”

For many of the volunteers, Dally in the Alley is a passion and a tradition.

“Most of us have a longtime connection to it,” Thornton says. “There are folks, including myself, who were taken to Dally as a kid.”

There will be 12 food vendors, including Amicci’s Pizza, SnoBiz Detroit, Big Calvin’s BBQ, Conchy’s Empanadas, and House of Mac.

Dozens of local bands will perform on five stages, and artwork will line the streets.

Dally in the Alley had been growing every year, and it drew 120,000 people in 2019, according to organizers.

The event began as a neighborhood party in 1977, when members of North Cass Community Union sold beer on card tables in the alley. It became Dally in the Alley in 1982.

To finance the event, organizers sell beer and merchandise, which is created by local artists and often features the festival’s mascot, an alley cat.

“We would really appreciate it if people responsibly drink the beer,” Thornton says with a laugh. “It literally is the lifeline of the event.”

Beer will cost a little more this year because of the increasing costs to put on the event, which includes sound systems, security, lights, barriers, bike racks, trash pickup, and chair rentals.

For decades, the Cass Corridor has been a counterculture hub for artists, musicians, hipsters, hippies, drifters, and misfits. To outsiders, it also became synonymous with drugs, crime, and sex workers.

“It was a community,” Thornton says. “It wasn’t necessary this bad, dangerous place.”

The Cass Corridor’s underground heyday is long gone. Gentrification has driven out a lot of old-timers, and city officials and the media have rebranded the Cass Corridor as just another section of Midtown.

But at Dally in the Alley, the funky, rebellious spirit of the Cass Corridor kindles again.

From 11 a.m.-11 p.m on Saturday, Sept. 10 between Forest and Hancock and Second Avenue and Anthony Wayne; see dallyinthealley.com for the full schedule. Admission is free.