How Michigan helped make Kelly Reemtsen the fine artist she is 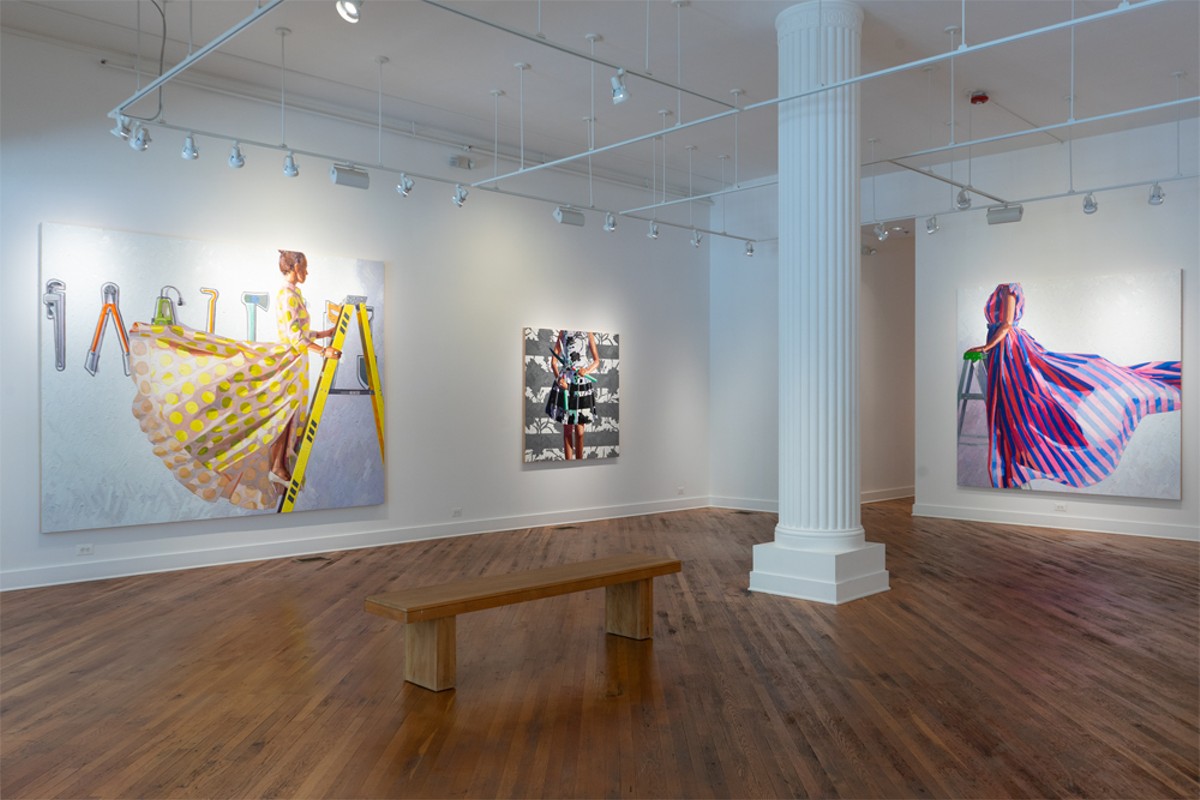 Kelly Reemtsen’s Pattern is on view until July 27. Samantha Bankle

About a decade ago, not long after Flint-born, Los Angeles-based fine artist Kelly Reemtsen first linked up with the metro Detroit-based David Klein Gallery, she had stumbled upon what would become her signature style: colorful paintings of women, all dolled up, but holding tools — hammers, saws, wrenches, you name it. It's a simple yet effective premise, juxtaposing the traditionally feminine with the traditionally masculine, with the energy of Mad Men's Betty Draper holding a rifle.

"I felt like it was a subject that I really liked for a while because I could change the dresses and change the tools," Reemtsen explains over a cocktail at the Shinola Hotel, where she was staying while in town last week for the opening reception of her latest show, Pattern, her fifth with David Klein. "People were liking it, and I was enjoying doing it."

She felt like things were looking up for girls and women, with a powerful First Lady in Michelle Obama, and Hillary Clinton certain to be the first woman president, and was considering exploring a new subject matter.

So Reemtsen dug her heels in.

"I do think since 2016, things have been getting worse," she says, referencing the GOP-led assault on abortion laws across the country, and the prospect that Roe v. Wade could be overturned. "It's going in reverse every day."

Reemtsen's journey to her current style is winding but logical. She moved with her family to L.A. shortly after high school, and studied art at Otis Parsons in L.A. and Art Center in Pasadena, initially drawn to fashion design and textiles. While working in merchandising, she linked up with painter Mike Tracy just to try something different.

"When I first started painting, I wasn't really concerned with subject matter," she says. "I was just looking for a reason to paint on panels, and I like using a lot of paint."

In L.A., Reemtsen had a loft in a building that also housed an antiques collector, and she had started collecting and refurbishing furniture by designers like Charles and Ray Eames, Herman Miller, and Eero Saarinen — all designers from Michigan's Cranbrook-centered Modern design movement, an attraction Reemtsen reckons stemmed from her upbringing here.

Eventually, Reemtsen found inspiration from L.A.-based painter Wayne Thiebaud, and began painting her modern furniture as still lifes. Next she started painting her dress collection, hung from a mannequin. Eventually, that turned into painting models wearing the dresses while sitting on furniture.

Her eureka moment came when she was flipping through a 1950s issue of Better Homes and Gardens magazine.

"I was flipping through the magazine and it had this survey with an image of this woman who was holding a garden hose," she says. "She had this dress on and she was dripping in jewels. And the survey said, 'Should a woman be able to water her lawn?' I couldn't believe the question! I was like, what is that? Should?" 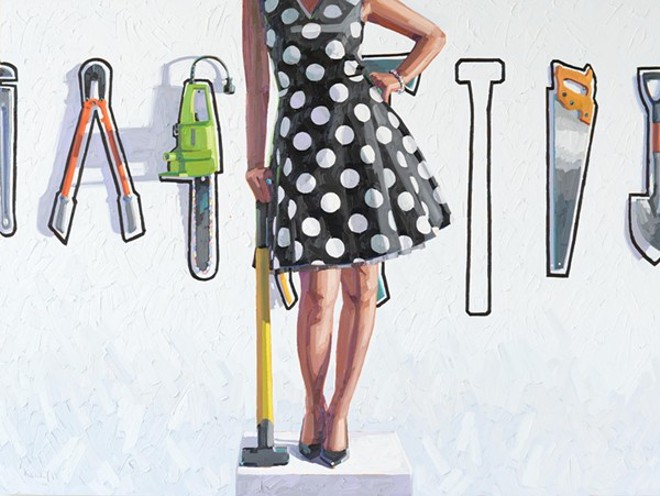 Reemtsen's friends serve as her models. They come over and play dress-up, as it were, and Reemtsen does a photo shoot for reference. (The tools are often too heavy to hold for extended periods of time.) Though the dresses have a retro feel, with cinched waists, A-line skirts, and bold patterns, the ones used in Reemtsen's latest series are contemporary, sourced from Venezuela designer Carolina Herrera's previous season.

Once the photos are taken and tweaked on a computer, Reemtsen draws them onto rigid prefabricated panels. She says she can't use canvas because she uses lots of paint, and a flexible surface would cause it to crack. Indeed, in the works in Pattern, some of the paint sticks as far out as an inch or so from the surface, especially when she paints jewelry — talk about dripping with jewels.

The work in Pattern is the largest Reemtsen has created to date, with one piece — depicting a woman climbing a ladder in high heels — spanning 8 by 10 feet. (Reemtsen says she had to rent a separate studio to accommodate them.) She also has a similar series in the show made from woodcut prints produced on a 200-year-old letterpress machine, but Reemtsen says she prefers the spontaneity of painting more.

So far, Reemtsen says her decision to confront the male gaze by simply depicting women in ways that are different than how they have traditionally been has paid off. "I get letters daily, like 'Thank you for showing that girls can do stuff,'" she says.

As far as the male reaction to her work, Reemtsen says a small number of men just don't get it. "There's a percentage of men who are offended by it, and say things like, 'She's going to chop off my junk'" when they look at her paintings, she says. "So I ask them a couple things. Like, what, did you do something that would merit that type of behavior? And also, why do you think that this painting of this woman is about you?"

Reemtsen's women are often depicted cropped at the neck. This isn't to objectify them, she says, but rather to keep them from being portraits of her friends. She says she wants the viewer to be able to project herself into her images.

"I like people to see themselves in my paintings," she says. "I keep them anonymous so everybody else can feel like they're part of the experience."

"You can be lovely and strong," she says. "It doesn't have to be one or the other."

Leyland "Lee" DeVito grew up in the suburbs of Detroit, where he read Metro Times religiously due to teenaged-induced boredom. He became a contributing writer for Metro Times in 2009, and Editor in Chief in 2016. In addition to writing, he also supplies occasional illustrations. His writing has been published...
Read More about Lee DeVito
Scroll to read more Made in Michigan articles