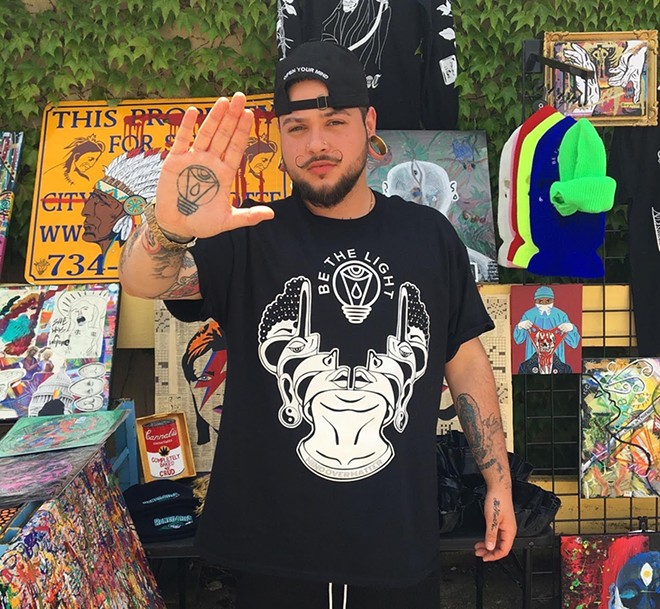 While they might look like death metal or punk band shirts at first glance, a closer look reveals meditative messages like “mind over matter” and “Be The Light,” which is also the brand’s name.

In order to find the light, however, you have to go through darkness first. Hernandez, who grew up in Southwest Detroit, knows this firsthand. Before becoming the conscious, warmhearted artist he is today, he had to overcome childhood trauma, homelessness, and self-doubt.

We met with Hernandez at Chroma Detroit where two of his paintings were featured in the space’s inaugural exhibition, You Belong, back in June.

Hernandez grew up in a single-parent home with an unloving mother and was mostly raised by his grandmother. He says he suffered from depression for most of his life and a bad breakup in his early twenties left him homeless and hopeless after a string of dead-end jobs.

When a Facebook friend from California, whom Hernandez had never met in person, learned of his situation, she started a crowdfunding campaign on his behalf, bought him a plane ticket, and found a friend for him to stay with.

“She was a complete stranger and now we’re friends to this day,” Hernandez says. “It sounds crazy, but it’s the truth. I was in survival mode for most of my life. And then I realized the war’s over. So now I can live.”

He stayed in California for four months where his new friend encouraged him to meditate daily and eat a vegan diet. Since he didn’t worry about having to work or pay bills, he could focus on healing his trauma and finding happiness again.

“I was super sad, super depressed, and it was so hard for me to get it together,” he recalls. “I did so many therapies, medications, yoga, meditation, and then I got lighter.”

When he moved back to Detroit, however, he struggled to find a job and a place to live once again. Shortly after, Hernandez attempted suicide, because he felt his life was once again deteriorating.

“I came back to nothing and was staying in a motel and I thought what has my life come to,” he recalls. “Prostitutes and drug addicts stay in motels and I didn’t think my life would ever come to that. At the motel, I was like I can’t do this no more, so I laid in traffic and I begged for someone to hit me. My friend came and got me and I was admitted to the hospital and that is what truly changed my life. That was rock bottom man. Where do you go after rock bottom?”

“I had to boss up and I had to grow up in here,” he says, pointing to himself.

Hernandez said he had to realize that it was up to him to save himself.

“That’s when I realized, like, what are you going to do? Are you going to keep asking what is wrong? Or you’re going to fucking do something? I had to boss up and I had to grow up in here,” he says, pointing to himself.

After being released, he got a job, saved up enough money to get his own place, and went back to making art, which he had loved since childhood.

“I started painting when I was really depressed and sad, just throwing paint around, and I was like, there’s more to this. I can actually be good,” he says. “And then I started sharing it and people would re-share it, and someone bought a painting and I was like, ‘oh my god, someone would actually pay for this?’ Slowly but surely, it became an evolution of just believing in myself.”

“I’ve been blessed that I don’t have to work for the man, I can just do art, create clothes, and connect with people,” he tells us. “I’ve created a lot of happiness out of a lot of sadness. The T-shirt designs look kind of dark, but they keep me rooted in positivity. I know what it is to not be in a good place and I like connecting with people who aren’t in a good place. I like giving them that contrast of — it’s possible, man.”

Hernandez is also a trans man. Transitioning from female to male freed Hernandez from a life he did not want to live. Becoming who he actually was inside, he tells us, allowed him to embrace his full potential.

“You didn’t know me then because I didn’t,” he says. “That wasn’t me. After I got to a certain space within myself, within my transition, it was like I’ve done what I needed to do, now what’s up with life? What’s up with life because there’s so much to live. Before there was no reason to live. There was nothing to do. It was just like passing time and now I’m here. I’m happy, and I’m ready to do what I have always wanted to do, which is art.”

Hernandez doesn’t talk to his mother, who he says shunned him for dressing like a boy when he was young and still doesn’t accept his pronouns or identity.

While he’s open about being trans, Hernandez does not want to be known as a trans artist. Many of his followers probably didn’t know he was trans until he “outed” himself with an Instagram post of him wearing a “trans af” T-shirt at this year’s Motor City Pride.

“I surprised a lot of people that day because I don’t talk about it. It’s not who I am. I’m an artist,” he says. “I never wanted to be like, ‘Hey, everybody, I’m trans and I paint. Support me because I’m LGBTQ.’ So many people use that. It’s a part of my life, part of my story, but it’s personal. I don’t have to tell you if I don’t want to. But lately, I have been feeling like some people can’t fully understand me without knowing.”

Now based in Wyandotte, the scruffy artist with stretched earlobes and dreadlocks creeping down his back spreads his positivity by screen printing on not just T-shirts, but whatever he can get his hands on. Vintage dresses, pants, button-downs, and windbreakers that Hernandez thrifts all get decked out in his home studio, where he prints every design himself.

He’s a self-described “upcycle thrifter maniac.” Most weekends Hernandez can be found slinging clothes at some kind of event whether it’s Dally in the Alley, Hamtramck Music Festival, or The Michigan Squeeze Station’s Infused Fest, where we first discovered his designs.

His clothing is also sold at Regeneration in Ferndale, Old Soul Vintage, The Luckenbooth, and the Michigan Squeeze Station.

It’s not all love and light, though. Several of Hernandez’s designs and paintings feature political messages that are loud and clear, like one of a police officer wearing a badge that says “PIG” with his brains being blown out.

One of his paintings in the Chroma show, “It Was Never Yours To Begin With,” shows an Indigenous chief wearing a headdress on top of a bloodstained “for sale” sign. Ironically, the sign was already emblazoned with the city of Wyandotte’s logo — a solemn looking Indigenous man — when Hernandez stole, we mean salvaged, it for his art.

“Yeah, it’s stolen land, so I stole the sign. How ironic that you’re selling the land when you took the land,” he says. “That’s their symbolism and it’s fucking disgusting. I went to their city hall, and it’s everywhere, and they call themselves the ‘warriors’ with the ‘chief’ as the depiction. There’s also a 200-year-old burial ground on the water of Wyandotte and they built a plastic chemical plant right on top of it. The remains of the burial ground are right next to the workers’ parking lot and they’re so old that they’re rising to the surface.”

He shakes his head in disgust as he continues. “It’s so symbolic and spiritual,” he says. “For me, it seems like they’re rising to the surface to revolt back because of everything. For someone like me, I drive in that town and I want to puke. For somebody else driving in that town, they probably go, ‘Oh, this is nice.’”

Disdain for Wyandotte aside, Hernandez is at peace with his life.

“I was a victim for so long,” he says. “I was in a victim mentality, and all ‘Woe is me, my mom never loved me.’ I’ll be 33 this year, and I’m way past that. It doesn’t get me nowhere. I accept everything for the way that it is — my shitty childhood, the good times, the bad times, my mother and my father for what they are and what they aren’t. I believe in myself now, and that’s the difference.”

You can find more about Be The Light on its Instagram page, @stay_within.

After living in Japan and traveling across Asia, Randiah Camille Green realized Detroit will always be home. And when she says Detroit, she's talking about the hood, not the suburbs. She has bylines in Planet Detroit News , Bridge Detroit , BLAC magazine, and Model D . Her favorite pastimes are meditating...
More
Scroll to read more Fall Arts Guide articles
Join the Metro Times Press Club