Will the real Van Gogh please stand up? 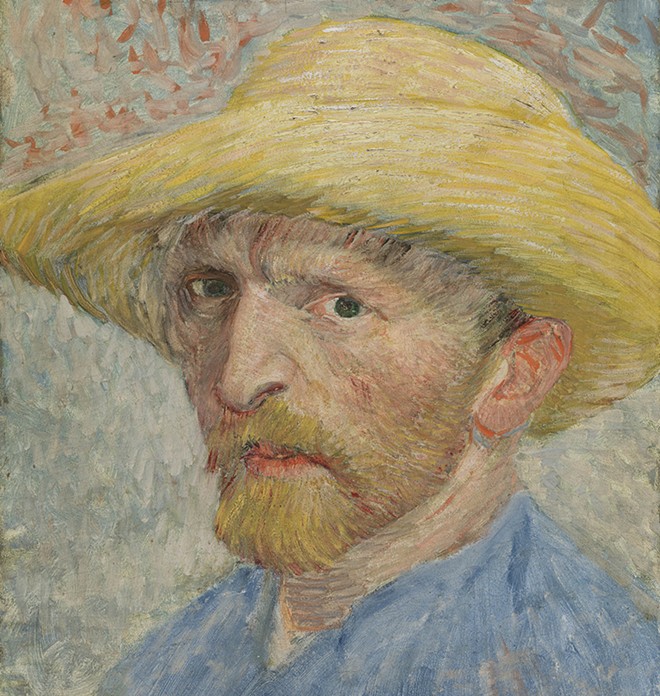 Courtesy of the DIA
This year marks the 100th anniversary since the DIA became the first U.S. museum to acquire a Vincent Van Gogh painting, “Self Portrait” (1887).

Though he is known as one of the most famous artists in history, the Dutch painter Vincent van Gogh never saw commercial success before his death in 1890. So he would probably be pretty confused about what happened in Detroit over the past year.

Last year, at least six competing “immersive” exhibitions based on the work of Van Gogh traveled the U.S., projecting digitally animated versions of the Dutch Post-Impressionist artist’s works on the walls and floors of venues across the country, to make viewers feel as if they walked inside the paintings. In Detroit, we got two. Beyond Van Gogh: An Immersive Experience came to the what is now called Huntington Place last June, and after months of delays, the Immersive Van Gogh Exhibit Detroit, riding off of an appearance in the critically panned Netflix show Emily in Paris, came to what was initially billed as a “secret location” (later revealed to be Lighthouse ArtSpace in the former Harmonie Club Building) in May of this year. (We admit we had trouble keeping the two events straight, and we weren’t alone.)

While these exhibitions yielded plenty of whimsical selfies — that seems to have been the main point of them — they also generated plenty of critical reviews, too. The New York Times dismissed them “wall-sized screen savers.” Boston.com also compared one of the exhibits to a screen saver, while also calling it a “cynical cash grab.” (The copyright to Van Gogh’s artwork is now in the public domain, hence the proliferation of these many exhibitions, or “experiences” to use the parlance of the people behind them.)

But what these “immersive experiences” miss is the very thing that makes Van Gogh’s art great. When you look at his brush strokes, especially up close, you do feel like you’re inside of the paintings. They already glow with the spark of creative spirit without needing to be digitally projected or animated. To see a Van Gogh painting in real life is an immersive experience in and of itself.

Fortunately, the Detroit Institute of Arts is here with the good stuff. In October, the museum is launching an exhibition of Van Gogh’s art. Called Van Gogh in America, the exhibition will include more than 70 works, including paintings, drawings, and prints. An exclusive to the DIA, the exhibition is being billed as the first ever devoted to Van Gogh’s introduction to America, and the largest-scale Van Gogh exhibition in a generation.

The DIA arguably earned the right to hold such a special exhibition: the occasion also marks the 100th anniversary since the DIA became the first U.S. museum to acquire a Van Gogh painting, “Self Portrait” (1887), or the famous image of the artist wearing a straw hit, his eyes radiating with energy.

The exhibition tracks the introduction and reception of Van Gogh’s work in America as he gained widespread acclaim, which didn’t happen until well after the DIA purchased “Self Portrait” for a mere $4,200. (Under emergency management in 2014, the cash-strapped city considered selling the work of art, which was valued by Christie’s to now be worth somewhere between $80 million and $150 million. Fortunately, the city was bailed out and didn’t have to resort to selling off its art.)