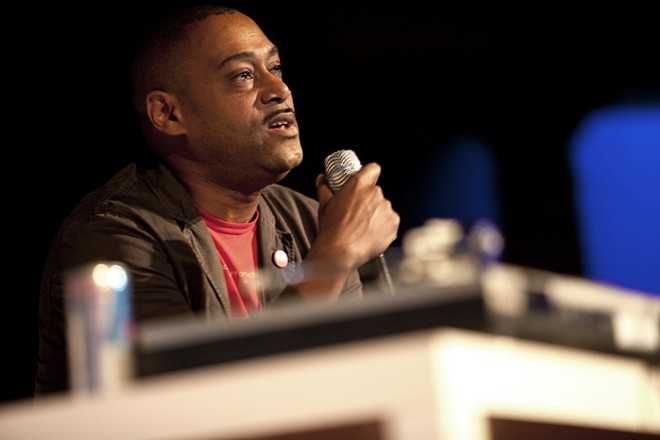 Mike Huckaby, a pillar of Detroit techno and an internationally renowned beatmaker, died Friday. He was 54 years old.

The campaign raised $26,000, well beyond its $7,000 goal, thanks to contributions from more than 700 donors. However, after Huckaby appeared to have turned a corner in his recovery, his condition worsened as he began to exhibit COVID-19 symptoms, The Detroit Free Press reports. Days before his death, Huckaby tested positive for the coronavirus.

Huckaby released his debut mix, Deep Transportation Vol. 1, on Rick Wade's label Harmonie Park in 1995. He came to be known in the community, having served as manager and buyer at the once-beloved, since shuttered Roseville record shop Record Time throughout the '90s. He went on to perform at the first Detroit Electronic Music Festival (DEMF) in 2000, and served on the curatorial board for the 2003 festival. He quickly became a renowned international player, serving as a strong connection between Detroit and Berlin after first performing at legendary German techno club Tresor in 1997.

Last year, Huckaby traveled to eight countries, performing more than 40 shows. He was also scheduled to take the stage at this year's Movement festival, which has been tentatively rescheduled from Memorial Day weekend to September due to the pandemic.

“All I can say is he was a truly humble ambassador for the music he loved,” Record Time founder Mike Himes told Resident Advisor. “Such a class act and he had a huge impact on many — not just in Detroit but everywhere. He will be greatly missed.”

In recent years, Huckaby became a staple in the youth community, as he frequently taught youth courses on Ableton and other digital music production software at Youthville and Red Bull Music Academy.

You can see other tributes below.

Mike was my mentor, my teacher. A guardian w/ immeasurable influence. all these decades later, I hold him in the highest regards. Mike Huckaby & his endless contributions will always be the truth. An irreplaceable Detroit enigma. Godspeed my friend, Huck 💔 #MikeHuckaby313 pic.twitter.com/wRz0j5mIPz

Rest in peace Mike Huckaby. Your music has & will continue to inspire us ♥️🎶

RIP Mike Huckaby :// remember getting soulseek rips of harmonie park classics from a friend in 2005ish n used to hammer the fuck out of ithttps://t.co/KweuhrLWrn