‘The Menu’ serves up a delicious dish of class consciousness 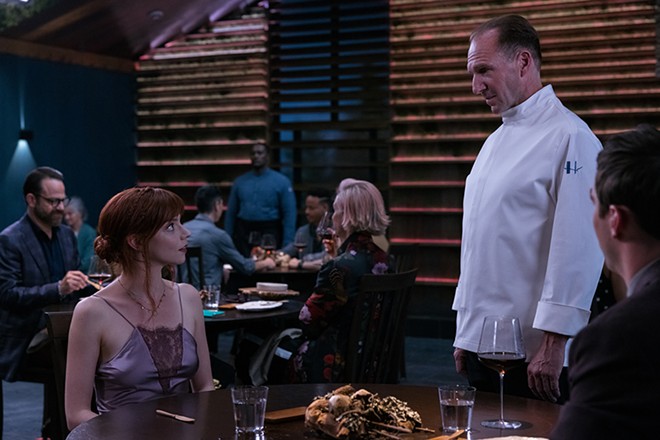 Leave your preoccupation with the Food Network at the door. Food is the least interesting thing about The Menu.

The dark comedy and horror film premiered at the Toronto Film Festival in September, and hit HBO Max this month. Written by Seth Reiss and Will Tracy and produced by Will Ferell, Adam McKay, and Betsy Koch, The Menu offers a satirical look at the world of fine dining, taking place on a secluded island where only the wealthiest feast.

It stars Ralph Fiennes (Harry Potter), who plays Julian Slowik (possibly written as a mix between Gordon Ramsay and Anthony Bourdain), an unhinged chef who initially enthralls his guests with elegant wine and small plates. We are informed each dinner has an overarching theme, and Tyler, played by Nicholas Hoult (Skins), is our guide into this fictitious world of exclusive restaurants. Opposite Tyler is Margot Mills, played by Anya Taylor-Joy (The Queen’s Gambit), who is hiding something that will come to light as the evening wears on.

Under Mark Mylod’s direction (Succession, Shameless), the ethics of environmentalism and sustainability in food production and consumption are discussed in a tongue-in-cheek manner (only the wealthy get to eat guilt-free), and the ecosystem of food service is the main course. Using a chef who has lost all passion for cooking and intertwining it with the politics of sex work, the film encapsulates the ideas of utility under capitalism and the futility of existence in a system that does not value art for art’s sake but intends to devour it for profit.

The Menu is a substantial piece of cinema, seemingly written as if it were initially made for the stage and brought to life on screen. Throughout the film, the ensemble cast shines in every scene, with no performance leaving crumbs. The dialogue, which includes extended monologues, is biting and direct. While the color palette leans toward a darker noir theme, the Midsommar-inspired introduction with an A-frame Scandinavian-style smokehouse illuminated by the midday sun sets the stage for the oncoming carnage, flashes of violence and gore that seem as if they were photographed for a Food & Wine spread.

But The Menu isn’t necessarily a gore fest made to terrorize the viewer, though it does include a staged suicide, drowning, and other incidents planned to accompany the dishes served throughout the evening. While Taylor-Joy lights up the screen as an iconic femme fatale-turned-final girl, Fiennes steals the show with his relaxed and calculated presence. The film revolves around the idea of teamwork; for the complete dinner service to work, the kitchen brigade must move as one, as Chef Slowik’s physical and verbal commands exemplify the meaning of a well-timed production.

The Menu is the latest addition to the “eat the rich” class consciousness that has been growing across social spaces and over the internet. Another timely connection: the USDA notes in the consumer price index that this year, food prices are predicted to increase between 3.5 and 4.5%, with restaurant prices increasing between 4 and 5%. With that in mind, The Menu manages to be more sinister within the context of a food crisis that’s making purchasing food one of the major luxuries of the 2020s.

Ultimately, the film addresses the obsession with fine dining and the slavery of workers to the wealthy. This is a brilliant and intricate understanding of how art is the root of culture, and when there is no other purpose left for it, the artist resorts to self-immolation for the survival of creation.

Romanian import and Greek school dropout Konstantina Buhalis was born in Bucharest, Romania, and came to Detroit in December 1995, where her first few years of life were enjoyed on the east side and Greektown. Buhalis spent her early years reading the Detroit Free Press, Teen Vogue, and Rolling Stone and began...
Scroll to read more Movies articles