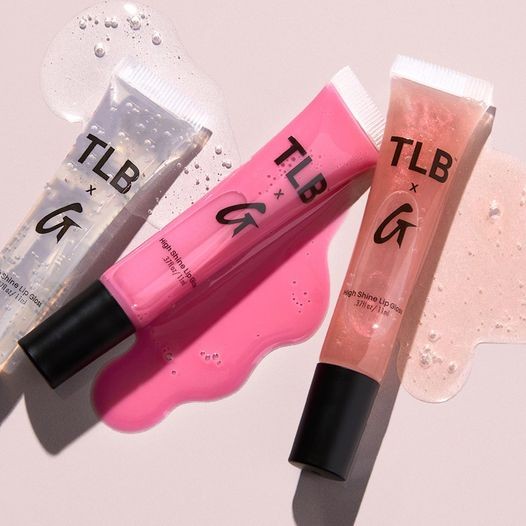 The Lip Bar/Facebook
The Lip Bar and Glam-Aholic Lifestyle release a limited collaboration on Detroit Day.
If you ever wanted to know what it means to be a D-girl, all you have to do is listen to Lola Damone's verse on Drunken Master's "50 Playaz Deep."

In honor of those women, Detroit's favorite bosses Melissa Butler and Mia Ray have brought their brands together for the ultimate D-girl collaboration.

The Lip Bar (TLB) and Glam-Aholic Lifestyle will drop the D Girl Collection on March 13, a.k.a. Detroit Day.

The collaboration was announced on social media and billboards around Detroit featuring Butler and Mia Ray each encompassing the '90s Detroit girl aesthetic by donning sculpted ponytails, Coogi sweaters, Cartier frames, and designed nails.
The collaboration features three TLB lip glosses and a Glam-Aholic Lifestyle cosmetic bag. Staying true to Detroit culture, the glosses are named Sprits (a clear gloss), Buffs (a sheer champagne gloss), and Stink Pink (a pink gloss). The cream cosmetic bag features the Glam-Aholic Lifestyle "G" embossed on the front, with TLB on the zipper pull.

Recently, The Lip Bar celebrated its 10 year anniversary. The company is most known for having been rejected on Shark Tank after Kevin O'Leary referred to Butler and TLB's Creative Director Roscoe Spears as "colorful cockroaches."

One decade later, the clean beauty makeup company has a brick-and-mortar store in Parker's Alley in Detroit, is now available in Target and Wal-Mart stores, and recently launched an inclusive, little sister brand, Thread Beauty (also available in Target).

Glam-Aholic Lifestyle began in 2010 as a fashion blog and evolved into a travel and lifestyle brand. In 2020, the brand released a travel tote and duffle set which sold out in under 10 minutes, grossing $700,000 in sales.