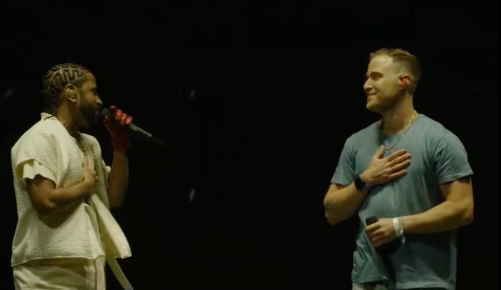 Coachella returned to the valley following a two year hiatus because of the pandemic.

This year, the festival brought a little bit of Detroit's west side to the desert, as Big Sean was one of the festival's headlining performances. This would be the rapper's first solo Coachella set after previously making guest appearances in 2016 and 2019.

Big Sean's performance was well-received, as clips from both of the festival's weekends have circulated across social media. While many loved that the "IDFWU" rapper brought out special guests YG and Jhené Aiko during the first weekend, it was his surprise guest on weekend two that really got old Big Sean fans talking.

During his set, Sean brought out his longtime friend Mike Posner, and the two performed "Cooler Than Me" on the Coachella stage. Following the performance, Big Sean paused to not only express his love for Posner, but also for Posner's family, including his dad, who died in 2017.

While many might see their performance as a simple nod to nostalgia, the connection between Big Sean and Mike Posner is a lot deeper than the stage. It was just over a decade ago that both were struggling artists writing music in Mike Posner's basement and performing at local colleges and venues like Club Bleu and The Shelter.

Moments in time that Mike Posner took to Instagram to discuss in an emotional video thanking Big Sean for all that he's done while including clips of the two over the last decade.

It's nice to see the two have taken their friendship and artistry from Detroit to Coachella Valley.

Born and raised on Detroit's Westside, Alex Washington is about as Detroit as they come. She judges your coney island order and serves a mean side-eye when anything across Eight Mile is called "Detroit." Her writing has been published in Real Detroit Weekly, The Detroit Free Press, Model D, BLAC magazine, and...
Read More about Alex Washington
Scroll to read more Arts Stories & Interviews articles