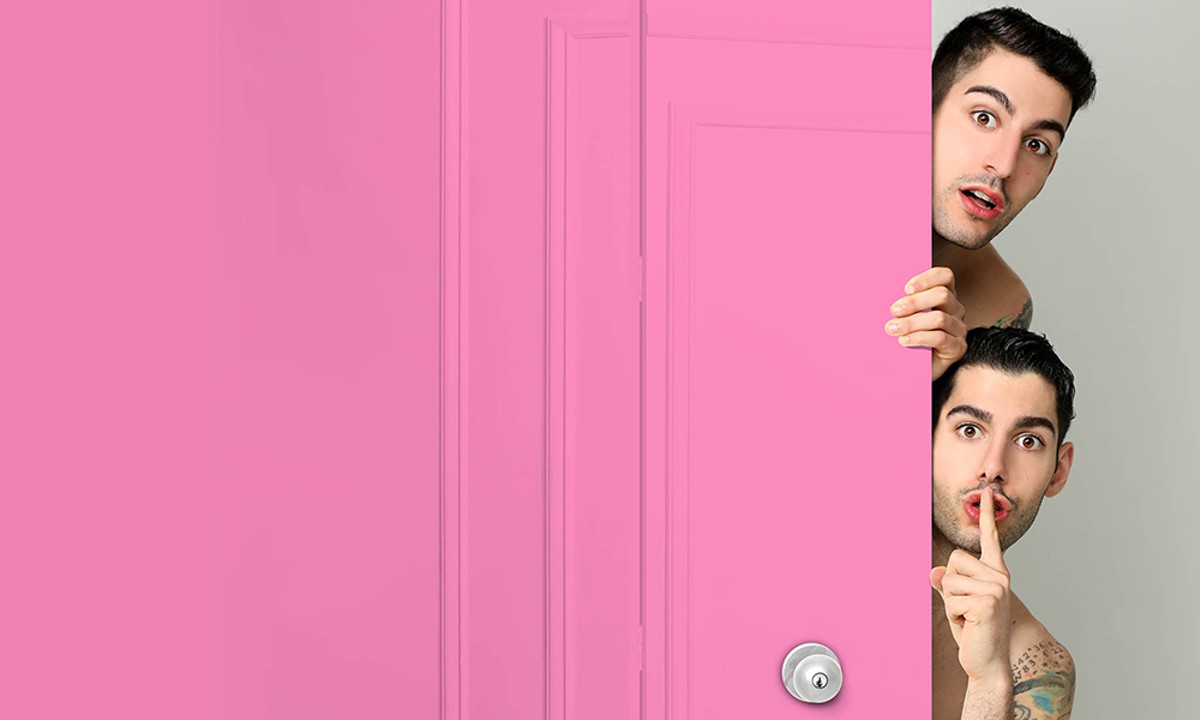 For 27-year-old gay Iraqi twins Michael and Zach Zakar, receiving a pint of Kroger brand rainbow sherbet for their birthday from their mom, Iman, is major progress.

"It might not sound significant, but it's very significant," Michael says. "I was like, Oh, you're so cute. It was so little, but you know, she's trying."

Zach says for every one step forward their intensely religious mother takes, it's another three steps back.

"She'll always have something backhanded to say, you know, like just the other day, she was just like, casually, 'You should give up on your dream, just be a doctor," Zach says. "So she's, like, progressing, but she always kind of slips back into her old ways."

For the Zakar Twins — which is how they prefer to sign off on email signatures and how they announce themselves in conversation and on social media — the dreams their mother suggests giving up on are big ones, several of which are already underway, while others have big glitter-pen check marks next to them.

The twins, who grew up in metro Detroit, are performing a special hometown run of their off-Broadway play, which is based on the brothers' co-written self-published 2017 anecdotal memoir of the same name, Pray the Gay Away. The play, which debuted in August 2019, chronicles the Zakar twins' journey of coming out to each other and, later, together to their ultra-conservative mother, who is played oh-so-subtly by a drag queen and who notoriously doused the boys in holy water and fed Michael and Zach grapes blessed by a priest in an attempt to "de-gay" them. Though the story is ultimately an ode to the complicated relationship between a mother and her children, Pray the Gay Away also serves as a humorously Biblical and interactive jaunt through the twins' first hookup and the time they hooked up with the same guy (no, not at the same time) and navigating life in the Midwest as gay Iraqi men.

"Michael and I have a dark sense of humor, and we always found it best to connect with people through humor," Zach says. "When we came out, our mother threw holy water on us. And then in the play, our mom uses a squirt gun to squirt the entire audience. So we masked a lot of serious topics through comedy. People can laugh at how awkwardly familiar it seems."

In addition to the book and play, the twins released a free companion e-Book that serves as a tool for parents with gay children — it's titled You Can't Pray the Gay Away. They're also makers of the My Twin Chat app, which features the tagline "I had a twin when I came out, now so do you." They frequently use the term "womb-mates" to describe their twin connection and use their gay twin experiences to help users with their own coming-out tribulations, relationship woes, and other LGBTQ-related issues. Users can interact with the Zakar twins directly by messaging them privately or by creating a public discussion, in which the Zakar twins engage and offer advice. Subjects range from general self-esteem concerns to falling for one's best friend to a topic they know well: coming out to religious family members.

"We talked to a lot of people, and we find that everyone's coming-out story is kind of the same — same story, different characters," Michael says. It's all the same struggle."

Both Michael and Zach attended film school and intended on using their story of growing up gay with their staunchly Catholic mother as a television script. But Zach says the book became a more organic vessel and basically wrote itself after the twins began mapping their individual experiences, as well as those they shared together, on sticky notes pinned to a bulletin board. There's still a possibility that they'll pursue TV, which would lead them to move from their mother's house to Los Angeles. There were several stories cut from the staging of Pray the Gay Away that would translate better to television, like the time Zach took an edible and called the police on himself or when Michael attempted to shoplift makeup for his mother's birthday and ended up getting arrested. But they also have enough ideas to warrant a second book, in which case the womb-mates would consider a move to the Big Apple.

Though their mother has seen the play, the Zakars are excited to unveil the revamped 2020 version of the stage show, which Zach says will have the audience pissing their pants. But the battle rages on in terms of proving to Mom that two gays are better than one.

"I think she still thinks that being gay can hinder you because people will judge you," Zach says. "I think my mom had the idea that, you know, being gay closes a lot of doors. I don't know if they close any doors. But it's kind of the only reason Michael and I are doing anything successful — it's because we're gay."