Lee DeVito
Royal Oak's Main Art Theatre shut its doors in April 2021, and announced it was permanently closed in June.

The Main Art Theatre in Royal Oak has sat vacant since June of 2021, when it announced it had shuttered its doors for good following a landlord dispute. Local non-profit Friends of the Main Art has been rallying to re-open it ever since, but cries to restore the beloved theatre are now being derailed by new plans to demolish it.

A.F. Jonna Development & Management Co. has submitted plans to tear down the theatre and replace it with a five-story multipurpose building with restaurants, retail, housing, and office space, Crain’s Detroit Business reports.

But now, Friends of the Main Art president Jason Krzysiak is calling for all “concerned film lovers” and supporters of the theatre to flood the meeting and protest the building’s demolition.

Krzysiak tells Metro Times Friends of the Main Art met with building owners North Main Square LLC back in February to propose taking over ownership and running it as a community-led, non-profit theatre. He says North Main Square LLC was initially receptive to the idea, but after a second meeting, he was told the company was not interested in entering any such agreement.

“Obviously we were disappointed, but we had a few different scenarios laid out, the worst-case scenario being what is transpiring where the owners demolish the building and build condos ... and the spirit of the Main is lost,” he says. “We also talked with them about creating a microcinema within the redevelopment that we would run as a non-profit cinema, but that is not part of their vision for the space.”

According to Crain’s, the proposed building will have 9,200 square feet of commercial space for a restaurant and retailer plus first-floor parking. There will also be around 31,000 square feet of office space on the second floor, with the third through fifth floors including 54 residential units.

Historic buildings being torn down to make way for shiny new apartments and stiff, modern-looking retail shops seem to be all the rage in metro Detroit these days.

Friends of the Main Art is planning a “Save The Main Rally” at 2 p.m. on Saturday, April 9 in front of the theater to show support for the cultural landmark. Despite the redevelopment plans, Krzysiak said his group still believes they can make an argument for the theatre’s preservation.

“If the theater is demolished, we feel like including a theater that could screen indie foreign, and cult films the Main Art is known for in the redevelopment would be a good compromise,” he says. “It will be a detriment to the culture of this community and to metro Detroit if we don’t have a Main Art Theatre. Plan C would be finding a different location within Royal Oak for us to host movie screenings. ” 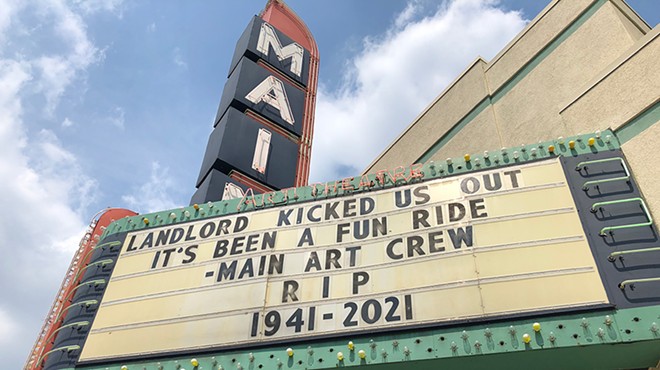 News of the theatre's abrupt closing came as a shock when the marquee outside the building was changed to read "Landlord kicked us out... It's been a fun ride. ...RIP 1941-2021" last June. Prior to that, it was temporarily closed in April due to COVID-19. Turns out it wasn't the landlord's fault after all — Landmark Theatres, who operated the cinema, terminated its lease with A.F. Jonna Development & Management Co.