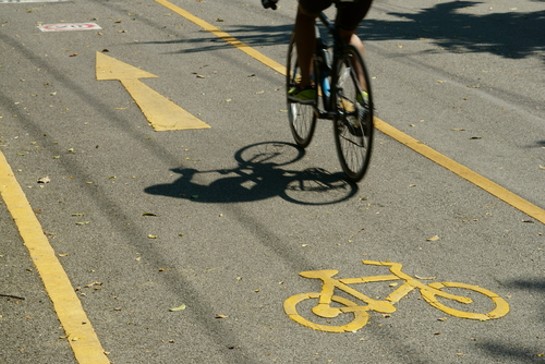 More than a week has passed since Keith Crain, scion of the Crain media family, issued his editorial railing against the appearance of bike lanes in Detroit. If the editorial doesn't come to mind, perhaps the field day many commenters had with the opinion piece does. The mockery came from local blogs, lit up local discussion boards, and even made national blogs. Heck, even we took a few whacks at it, although later than most.

But a more substantive and less ridiculous response comes our way today from the good people at the Detroit Greenways Coalition, an organization advocating for the very bicycle infrastructure that so shocked and appalled Crain. It's a good read. Here are the main responses to Crain's complaints, or you can read the full document here.

• “Bike lanes came without notice.”
Detroit started its citywide bicycle planning in 2005 with a non-motorized transportation master plan. There have been hundreds of public meetings since then for bike lane projects. Public feedback at these meetings has helped shape what the city is installing. East Jefferson in particular has seen significant non-motorized planning and meetings, including the “2012 Visions of Greenways” plan, the Detroit East Riverfront Framework Plan, and countless neighborhood
and business meetings along the corridor. ...

• “No one bikes in Detroit.”
This has not been true for over 150 years. While no city has exact numbers on bicyclists, we do know that there are at least 68 bike clubs in Detroit, each with many members who regularly ride throughout the city. Slow Roll is the largest weekly bike ride in the United States with many rides topping well over a thousand participants. On an average day over 1,200 people use the Dequindre Cut, both pedestrian and bicyclists. The very popular MoGo bike share program hit its annual 100,000 trip goal in under 5 months and has shown non-motorized transportation is needed by both residents and visitors. ...

• “Bicyclists don’t pay their fair share.”
There is an unfortunately universal misconception that State and Federal taxes on motorist fuel and vehicle registrations fees cover Michigan’s road costs. They don’t. ... If anything, bicyclists and pedestrians subsidize motorists.

• “Bicyclists don’t follow the rules.”
Nationwide studies show this is not true. It is simply that motorists notice others breaking the law more than they notice themselves. There is more severe and permanent danger to pedestrians and bicyclists from motor vehicles than the other way around. It is worth remembering that the rules of the road were birthed by the auto industry to gain a competitive mobility advantage over other modes of transportation, be it bike, horse, cart or tram. ...