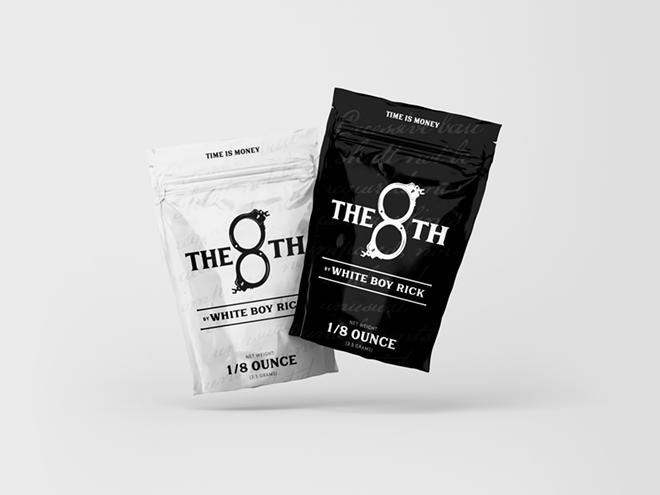 Hot on the heels of being portrayed by a CGI'd Eminem in 50 Cent's set-in-Detroit Starz crime drama BMF, Rick Wershe Jr. — aka "White Boy Rick" — is finally releasing his new cannabis brand on Friday, Nov. 19 at Pleasantrees dispensaries.

The new line is dubbed "The 8th," a double entendre that plays on the popular measurement for weed as well as the 8th Amendment of the U.S. Constitution, which prohibits the “cruel and unusual” punishment. In the 1980s, Wershe became the youngest FBI drug informant in history at the age of 14. Three years later, he was arrested for cocaine possession and sent to prison, and last year, he was released after serving what he believes could be the longest sentence for a nonviolent juvenile offense.

The packaging for The 8th reads, "Time is money."

For now, the cannabis products, which include premium flower and branded clothing, are only available in-store at Pleasantrees locations, but according to a press release, there are talks to eventually make them available in third-party retail locations as well.

A "substantial" portion of proceeds will go toward the release of "wrongfully or excessively imprisoned drug offenders," the release says.

In the meantime, you can catch White Boy Rick at a number of meet-and-greets at Pleasantrees this week.

Leyland "Lee" DeVito grew up in the suburbs of Detroit, where he read Metro Times religiously due to teenaged-induced boredom. He became a contributing writer for Metro Times in 2009, and Editor in Chief in 2016. In addition to writing, he also supplies occasional illustrations. His writing has been published...
Scroll to read more Canna-Business articles