While Detroit's social equity plan gets held up in a lawsuit, these cannapreneurs aren't waiting

Rebecca Colett, CEO of Calyxeum and founder of the Detroit Cannabis Project, and LaToyia Rucker, COO of Calyxeum. Courtesy photo

Social equity opportunities seem to be a very popular entryway into the Michigan cannabis business. That makes sense. Nearly 200 municipalities, including all of the state's largest cities, qualify for the fee-reduction and business-resource program. Social equity provisions only apply to recreational licensing, not medical.

The basic idea of social equity is to help restore communities that have been "disproportionately impacted by marijuana prohibition and enforcement" by giving them a leg up in making some money off the thing that caused them so many problems. This even extends to individuals. The Marijuana Regulatory Agency offers a 40 percent licensing fee reduction to people with felony marijuana convictions, and a 25 percent reduction to those with misdemeanor convictions. Sort of a "the badder you were then, the better for you now" approach.

Detroit and Ypsilanti, as well as many other cities, have further considerations that specifically target licenses for local residents. Detroit has a "Legacy" Detroiter approach targeting licenses to those who have basically lived in Detroit for 15 of the last 30 years — fewer if you've been imprisoned. That plan is ensnared in a lawsuit right now due to some of the local ownership requirements, however. Last week, U.S. District Judge Bernard Friedman issued a temporary restraining order in a lawsuit that argues the ordinance is unconstitutional and discriminatory, which means some folks are waiting to see how that turns out to learn what, if anything, is allowed.

Folks at the nonprofit Detroit Cannabis Project aren't waiting around. DCP is an incubator program providing an approach to creating successful cannabis businesses in Detroit. The organization just started with its first cohort of prospective business owners — a group of 35 culled from about 200 applicants. The all-inclusive program addresses business basics, business plans, financing, licensing, and more in sessions with an array of professionals. It even includes a Shark Tank-like session for business pitches.

Rebecca Colett, founder of the group, takes a grand view of social equity, and it's not the only pot she's stirring. She's also a co-owner of Calyxeum, a medical cannabis growing and processing business in the 7th District on Detroit's west side.

"We wanted to take the different approach," says Colett. "Community is a huge part of our brand. We're required to do some type of community service. We just wanted to go above and beyond. If we do good for people, they'll be good to us."

They're creating a workforce development program so that people have the skills to work in the cannabis industry even if they're not business owners. And they aim to fix up the neighborhood around them in a meaningful way.

"We've acquired quite a bit of vacant homes and vacant lots," she says. "We're going to turn some of them into urban gardens. We're building and redeveloping a lot of these lots for kids to have a place to play and to be safe for senior citizens. We're rehabbing some places into courtyards."

All this adds up to something the opposite of what was once considered the effect of cannabis on the neighborhood. Job training, feeding people, and building community are great social equity.

Jessica Jackson is another legacy Detroiter working cannabis social equity from a different angle with the Legacy Collective Corporation, a worker-owned cannabis business.

"We are a cooperative, keeping equity within our community," says Jackson, a proprietor of the cannabis-friendly Copper House. "We want to make sure that our employees have access to ownership. ... Our team is regular people with regular amounts and access to capital."

Their approach is modest. They've applied for a Class B growing license for up to 500 plants. Their business plan calls for reinvestment into the business and adding a consumption lounge and eventually moving into retail after several years.

All of this depends on Detroit moving ahead with its recreational marijuana licensing program. A group of dispensaries has sued the city over the law and a federal judge has ordered the city to stop processing recreational license applications.

Ypsilanti settled all this in 2019 when that municipality opted in for recreational cannabis. The Ypsilanti Grain and Farm Bureau is a prospective business that has used social equity in its application. Owners of this business plan to have a grow operation, retail sales, and a consumption lounge located in the historic building near Frog Island.

"The Ypsilanti Grain and Farm Bureau is historically pretty significant to Ypsilanti," says co-owner Jeff Guyton. "For 25 years it's been on the dangerous buildings list. There's so much work that needs to be done to it."

The 93-year old grain silo fits right in with the plan to have a vertically integrated business. And the up to 2,000 plants the business is licensed to grow is definitely a form of farming. Not to mention restoring a historic building fits well into the community benefits thinking around the social equity concept.

Interesting things like these are popping up all across Michigan as cannapreneurs get creative with how to bring social equity home. 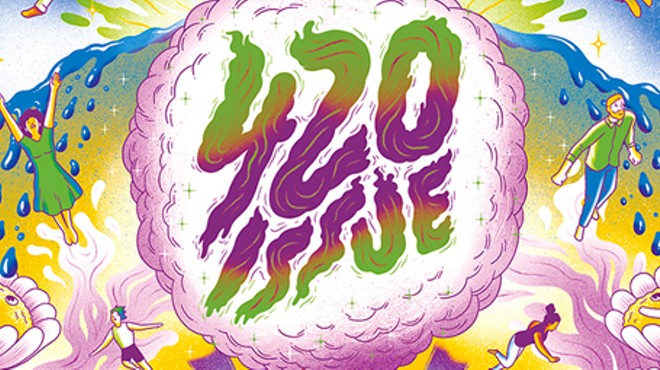