What if Cannabis Oil Cured Cancer? 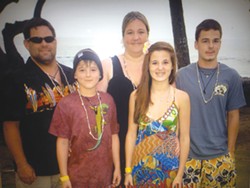 The Erwin family after Alysa's diognosis

IN JANUARY 2011, then-14-year-old Alysa Erwin began having intense, debilitating headaches. By that spring she was diagnosed with Grade 3 Anaplastic Astrocytoma — brain cancer — at University of Michigan Medical Center.

According to information at mdguidelines.com, “Individuals with grade 3 astrocytoma have a median survival time of 18 months with treatment (radiation and chemotherapy). … Even with aggressive treatment, astrocytomas of all types tend to recur, making the prognosis generally poor.”

Alysa’s tumors were spread throughout her brain like ivy or a spider web. There was no local tumor that could be targeted for radiation. The Erwins, including Alysa’s parents Carly and David, returned to their northern Lower Peninsula home with five days worth of Temedor, an oral chemotherapy pill, to begin treatment.

“We were told she could live 18 months to two years on chemo,” says Carly. “We thought that was a death sentence to her.”

Still, seemingly without options, the Erwins figured they would give the chemotherapy a try.

“She was deathly sick,” says Carly of her daughter after taking the Temedor.

Carly was bedridden with terrible headaches and couldn’t keep food down. The Erwins were devastated. A few days later they got a call from Carly’s father, who lives in southeastern Michigan, saying he’d recently gone to a meeting with the group now known as Michigan Compassion and heard about Rick Simpson Hemp Oil, a cannabis extract that some people are using to treat cancer. The Erwins then watched the videos “What If Cannabis Cured Cancer” and “Run from the Cure,” both available on YouTube.

“This is the end, we thought,” says Carly. “If this is all that chemo can do, at least we can make her comfortable for the months that she had left with us.”

At first, the Erwins couldn’t find cannabis oil. Eventually they met Gersh Avery in the Ann Arbor area, who facilitated the Erwins in finding what they needed. In early August 2011, Alysa had her first dose of oil. Carly mixed about eight milliliters of cannabis oil with about a half-cup of peanut butter. She gave her daughter about a half-teaspoon, once in the morning and again in the evening. After the very first dose there was a miraculous transformation in the sick girl.

“About 30 minutes after taking cannabis oil she was out of her room eating and smiling,” says Carly. “We knew what we wanted after seeing her, but we wanted to see what she wanted because it was her body. The light was back in her eyes again. She was back to herself. She said she wasn’t doing chemo anymore; she was only doing cannabis oil.”

Starting out, Alysa slept a lot as her body became accustomed to the high levels of cannabinoids in her body. And, as she was able to tolerate it, her mother upped the dosage until Alysa was getting about one-and-a-half milliliters a day for a year, then upped it to three milliliters each day.

At first they didn’t tell Alysa’s doctor. They were afraid and unsure of the legal implications. At her first three-month checkup, the MRI showed that the cancer was not growing. The Erwins told her doctor that Alysa was doing the chemo. The subsequent exam showed the same result, but the doctor had questions because Alysa’s blood work was not showing the indications expected of someone on chemotherapy. The Erwins admitted then that they had stopped the chemo in favor of cannabis oil. The doctor’s response was cautious because cannabis oil is not a condoned treatment. But she said, “Whatever you are doing, keep doing it.”

After a year, the cancer had evolved into five identifiable tumors at the back of Alyssa’s head. One of the tumors was near her brain stem and threatened her ability to breathe and walk. The Erwins agreed to have radiation treatment.

They continued the cannabis oil treatments. In January 2013, two years after the onset of her headaches, Alyssa’s MRI showed no cancer. Subsequent MRIs, the most recent in October, have shown no cancer. Her next scheduled test is in April.

“The doctor looked at the MRI and she just smiled,” says Carly. There were a lot of smiles going around.

During this time it was usually a scramble to get cannabis oil. According to information available on the Internet from Rick Simpson, one pound of high-grade marijuana produces about 60 milliliters of oil; at one-and-a-half milliliters each day, a pound would last only 40 days. And with the cost of a pound of good quality marijuana somewhere north of $3,000, you can see the problems. With help from Carly’s father, the Erwins have spent about $17,000 on cannabis oil medicine. Some of what they got was donated to them. Avery, from Ann Arbor, helped the Erwins find a good strain and advice on how to produce oil.

Today, Alysa lives a pretty much typical teenage life, except she takes cannabis oil. She took driver’s training and passed her licensing test during this period with no problems.

“I didn’t really know anything about it,” says Alysa. “I started watching videos and seeing other people’s stories. I thought I should try it. I was excited to try it. I didn’t want to do that chemo anymore because of the way it was making me feel. I think I would have gave up if I had to keep doing that chemo.”

In the past year, she has started speaking publicly in support of the therapy that saved her life.

“I’m trying to spread the word around what this medicine can do; what it can help,” says Alysa. “The last time I spoke, it was trying to fight for the oil. I’m trying to help people out to get a second chance like I got. I know my family was really scared. I was too. Once I found out about this oil it just gave me hope. That’s what gave me hope for this cancer being gone. I like to let other families know that so they can have that kind of hope.”

In a few weeks, Alysa Erwin will have been officially cancer-free for one year. It will have been more than 36 months since her 18-month death sentence. She continues her cannabis oil treatments.

Note: A previous version of this article said that Alysa was 4. She was 14.