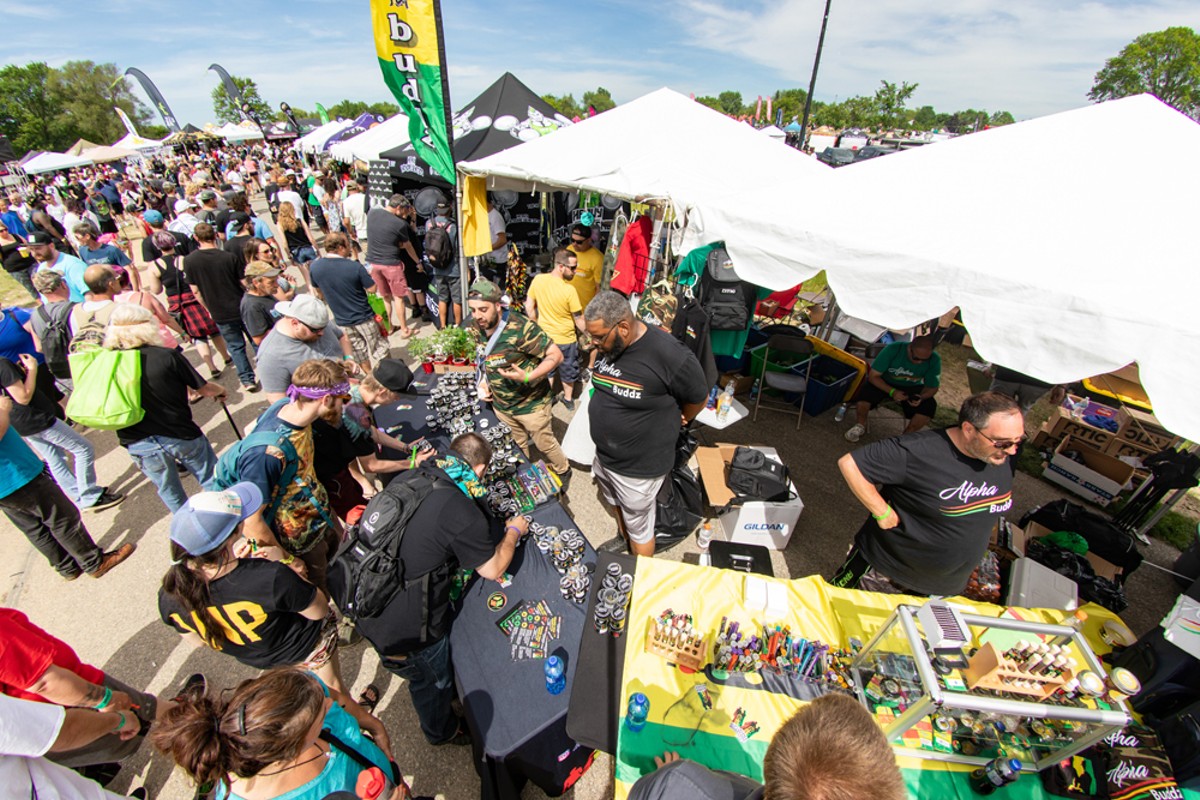 The first day of the first High Times Michigan Cannabis Cup since Michigan voted to legalize recreational marijuana may have given us a whiff of what the market will be like in Michigan. Previous High Times Cannabis Cups have been limited to medical marijuana patients and vendors. You had to have a state medical card to get in. This time, any adult could enter the event.

By all accounts, the crowd was at least double what it had ever been before. If attendance at a Cannabis Cup is any indicator, were medical marijuana provisioning centers allowed to sell adult-use recreational product anytime soon, their client base would at least double. Maybe more. Some folks I spoke with estimated that the crowd had tripled in size.

No matter the estimate, the Auto City Speedway where the Cannabis Cup took place was off the hook crowded, as indicated by the difficulty of finding a place to park. People half a mile away were selling spots on their front lawn for $15. Almost anywhere you could get a car squeezed in had a car squeezed in there. Then there was the hourlong wait in a massive line to get in. Of course the wait was made better by the folks who were freely passing joints and blunts around, or vaping on their preferred device. The prevailing opinion near me among folks in line was that the High Times organizers had somehow miscalculated and weren't ready for the big crowd.

However, once inside the speedway there were no problems, save maybe standing in a line to get at your vendor of choice. High Times obviously knows how to run a Cannabis Cup, and other than a little wait at the gate this celebration of all things cannabis seemed well-organized.

Once inside I almost immediately came across my favorite T-shirt of the day. Sons & Daughters United had one at their booth that declared "F*ck Cancer" with a cannabis leaf where the "u" would be. It was a great message for the continuing medicinal use of marijuana. They also had a handy one-sheet compilation of information on medical uses of cannabinoids and terpenes that deserves to be well-disseminated.

The huge crowd was out to have fun, and they seemed to be accomplishing the task as they checked out the wares of numerous vendors who offered flower, extracts, shatter, wax, dabs, edibles of all kinds, live plants, seeds, distillates, tinctures, and probably a few other things. There were so many free 5-milliliter gummy samples being handed out that a person might have a good time just walking around and taking samples.

But you don't drive to Clio and pay $45 general admission, plus parking, for the free samples — although you might for the music. Busta Rhymes, Lil Skies, Too $hort, Prof, Trick Trick, Willie J. Peso, and TNL were all scheduled to perform. A guy who handed me a joint while standing in line said this year's lineup was the best ever. Someone nearby chipped in his agreement.

Most folks were there for the weed, however — the ambience, the freedom to openly indulge with others in celebration. They were there to check out the products or hawk their wares. The marketplace is set to get real big real fast, and many vendors were there to try to catch someone's eye, to get their products on someone's shelves. And there were more vendors than usual. Many had their strains in any form you wanted — the same stuff as bud, extract, edible, plant, seed. As the day wore on, vendors would put a line through items on their menus for what was sold out. There was no shortage of marijuana at the place, just high-volume sales of the most popular items.

The proliferation of strains was confusing. Many folks were selling strains that I'd simply never heard of and had no idea what they were. Many folks breed something and give their highly creative name to it. I'm becoming a fan of the cannabinoid and terpene profile. Just tell me if it's sativa or indica, let me know which cannabinoids and terpenes are prevalent, and at what levels. That information plus a few whiffs with the old nose and that gives me some guidance on what I'd like.

Speaking of smells, it was a bud-sniffer's holiday. So many people were offering free smells of their jars of buds. It was fun, but after a while it was hard to tell one thing from the next.

Another aspect of the Cannabis Cup is the folks who find novel ways to show off their cannabis enthusiasm through their dress. A highlight of my day came when I met a guy, who came in from the west side of Michigan with his friends, sporting a five-point marijuana leaf design cut into his hair along with a "420." He said he'd previously been to six Cannabis Cups.

Although the crowd had swelled larger than ever before, almost everyone I asked claimed to have been to a previous Cannabis Cup. I finally did find a couple of guys who hadn't previously been to a Cannabis Cup. One of them cited the 420 festival in Denver as a better event. OK, but they've been at it longer than we have.

Busta Rhymes has been at his game for 28 years, which he pointed out to the crowd a few times during his set. All that's to say that he knew how to talk to the crowd about weed as he teased tunes and cut them off to build excitement. At one point he asked everyone who had some weed in the crowd to hold it up. Then he slammed into a crowd-pleasing "Pass the Courvoisier" to end the set. Everybody seemed happy, although someone should have told Busta that for all the weed in the house, alcohol was prohibited.