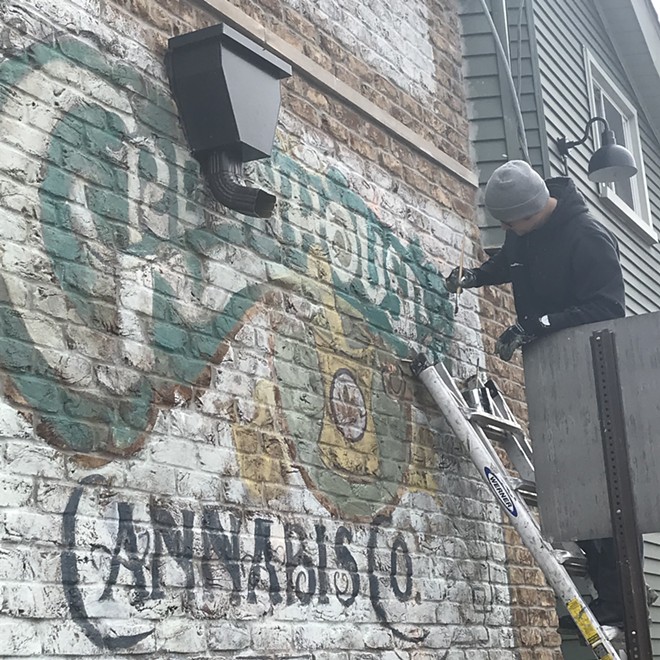 There seem to be a maelstrom of emotions inside Jerry Millen, co-owner of the Greenhouse marijuana store in Walled Lake, as he gears up for the grand opening of recreational sales at the store.

"I'm excited, a little scared," he says. "You never know what to expect. You know when you have a party and you always think nobody's going to show up. I've got the exact reverse mentality on this one; I think too many people are going to show up. You can prepare all you want, but on the day — if it's too big, what are you going to do?"

Then Millen adds, "We'll have 1,000 to 10,000 or whatever — I hope we don't have 10,000," showing just how unclear he is about his customer base for recreational marijuana or how excited folks will be to shop at the Greenhouse.

If the kind of temperatures we had last week return this Saturday, a crowd of 10,000 marijuana customers would make a heck of a beach party on Walled Lake.

The ribbon-cutting starts at 9 a.m. on Saturday, which will be accompanied by fireworks, after which DJ Ross the Boss will spin for a few hours because, as Millen says, "you can't have fireworks and then have everything all quiet." We'll trust him on that one.

DJ Ross will be spinning from the rooftop patio above a brick addition built to accommodate recreational sales. And, considering the anticipated crowd, things probably won't get quiet inside the 4,000-square-foot tent set up for opening weekend. Instead of having folks stand in line "like cattle," Millen has workers ready to register people in a digital queue so they can hang out in the tent munching on free doughnuts and mac-and-cheese until they receive a text alerting them to come inside. In addition to the snacks, there will be 12 marijuana product vendors in the tent displaying their wares and educating folks about them — like, for instance, what to expect from a gummy candy infused with THC, and the duration of the effects. Platinum Vape, Cushy Punch, Real Leaf Solutions, Dr. Green CBD, and Midwest Organics are among the vendors that will be on hand

"We're keeping them separate at least for the grand opening, then we'll feel it out," Millen says. "Nobody cares about the medical patients anymore — it's ridiculous what's going on. I want to keep them in their old world. They've been good to us, and I don't want to screw them up. Patients have always been there, and I want to be there for the patients. The rec people will always come, but the patients need it."

This will be the second recreational marijuana sales location in Oakland County. Breeze Recreational Marijuana Shop on John R in Hazel Park opened on Sunday to steal a little bit of thunder from the Greenhouse. But Millen's spot has been operating as a provisioning center for a year, and his promotional skills culled from working in the mixed martial arts and wrestling world come to fore here.

Last week, workers scurried about getting ready for the anticipated rush of customers. Some sat at their computers registering the marijuana rollover from medical to recreational with the state. Most of the recreational marijuana supply available is medical marijuana that has been in inventory for at least 30 days. Other workers pre-packed buds into gram- and eighth-sized packages. Still others scrambled to finish parts of the addition, laying tiles, painting and banging boards into place. Ferndale artist Mark Serra, who paints weathered, distressed-looking images, worked from a ladder on the outside of the building.

It's here where the Greenhouse stands out. Most of the higher-end dispensaries in the area try to beat the sterile atmosphere with CBD counters, seating, screens, and magazines in the waiting area. Sometimes vendors set up there to display products. The Greenhouse looks to have had the most success in creating a "homey" vibe without the industrial look. For one thing, the edifice looks more like a residential home than it does a commercial building from the outside.

Inside, the CBD area is not a counter in the lobby. Greenhouse Genuine CBD has a cafe-like atmosphere of its own off to the side of the building. In addition to the lotions and tinctures, customers can get CBD-infused water, cookies, ice cream, and even doggie treats. The rooftop patio is not a part of daily operations, but it can accommodate modest private events away from the sales area. The room where the medical and recreational products are sold doesn't have the cavernous, industrial look that some places have. A Serra painting on the inside of the addition highlights the softer atmosphere of the place.

The overall gentle vibe is enhanced by the Greenhouse location literally across the street from the lake, not far from Mercer Beach. It's nestled into the business strip near the beach with restaurants and shops. In comparison, Detroit's provisioning centers are often zoned into industrial areas away from parks and places where alcohol is sold. There's a party store selling alcohol about 40 feet away from the Greenhouse.

There's a reason behind the soft feel of the place. Millen says he wants the place to appeal to women. "I want it to be like the Pottery Barn," he says. "As long as you can make women feel comfortable, that's the key."

Moving forward, Millen expects about 500 recreational sales each day, nearly tripling the customer base. He's purchased another lot for parking. This is the culmination of something he's worked on for 13 years, going back to working with state legislators to formulate language for medical marijuana laws. If things work out here, Millen would like to see the approach replicated in other municipalities like Walled Lake around the county. He's already contacted some cities and invited them to come see what he's got going on because it's a little different.

It looks like a genteel place that could be named Ye Olde Cannabis Shoppe rather than stepping into the Wal-Mart of Weed.