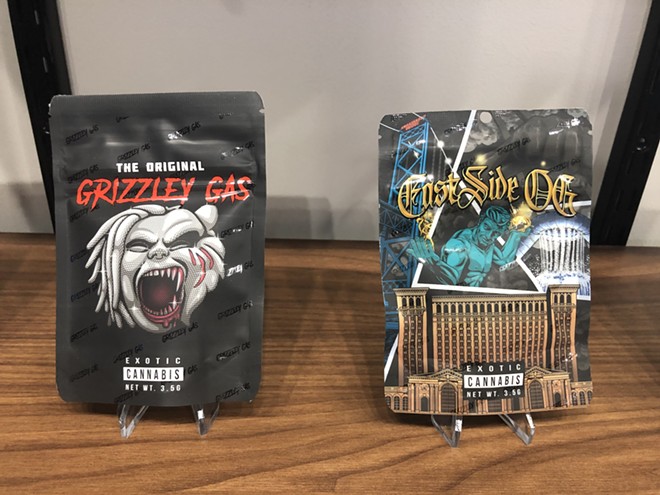 Lee DeVito
Rapper Tee Grizzley has debuted a new line of "Grizzley Gas" marijuana in a partnership with Levels Cannabis.

The full line of products includes The Original Grizzley Gas, Marshmallow OG, Jet Fuel Gelato, and East Side OG, which drop on Saturday at Levels Cannabis, a new dispensary in Center Line, outside of Detroit.

Awsem Zbair, the Levels Cannabis' director of operations, says the dispensary is located in a former wholesale ice cream store, and is the first of 16-plus Levels dispensaries planned for Michigan.

The drop comes ahead of Levels' grand opening party, set for 11 a.m.-7 p.m. on Friday, Aug. 20, and Saturday, Aug. 21. Vendors will be set up in the parking lot, along with music from DJ Godfather and DJ Prevu. Attendees will also have an opportunity to register to win a black 2021 Dodge Challenger parked out front — just in time for the annual Dream Cruise weekend — along with other prizes.

"We want to show the community that we're coming in hot," Zbair says.

The company also has three cultivation centers and a processing center located across the state, as well as a license to hold pop-up cannabis events.

Zbair says the collaboration came through mutual friendships and the fact that Grizzley wanted to partner with a Michigan company. "We had an opportunity to sit down, and he realized really quick that we're high-character guys," Zbair says. "And you know, he's a very talented, successful local artist that has really good roots in the community. We just looked at it as an opportunity to work with good people."

Zbair, who has a background as an entertainment manager at MGM Grand Detroit Casino and the former nightclub Elysium Lounge, says his focus with Levels is hospitality.

"Sure, all the glitz and glamour is cool," he says. "But our biggest job is to make sure that we're [giving] the customer what they want. When you typically go into a dispensary, they'll show you what they think [the best product] is, before they even ask you, 'Well, what are you really looking for?' And we want to make sure that we're fleshing it out, whether you're going to a bonfire that weekend and you want to hang out with your friends and relax, or you know, unfortunately, you're suffering from epileptic seizures, and you need something to help with that ailment."

The dispensary is open for both adult-use customers ages 21 and older and medical marijuana-card-carrying patients ages 18 and older.

"We've got people here that you can have those comfortable conversations with and will steer you on the right path," he says. "And I think that's the biggest thing missing from cannabis is that hospitality, that rapport that you build with somebody so that they not only are happy to come back, but they want to tell people how good of a job you did, because you're actually going out of your way to make sure that what they're getting is perfect for them."

Zbair says he hired the team with that in mind. "I basically told everybody if you're not someone's favorite aunt or uncle, you're probably in the wrong place," he says.

Inside the store is a counter with products behind it, and budtenders can provide strain samples in jars that light up with a magnifying glass to inspect the strains. When you place your order, you then enter a separate line to pay while the staff gets your order ready.

Zbair says he got into cannabis after drinking heavily during his time working in nightlife.

"It's crazy to me, you know, how much better I would feel smoking a big joint compared to drinking," he says. "The social drinking is still fun, but I'm not coming home and having tequila on the rocks. I'm probably hitting a pre-roll and watching a movie instead of having a cocktail and watching a movie. And the next day, I don't feel like crap — I feel like a champ. I go to the gym every morning."

As a French bulldog owner, Zbair says that the company will focus on animal shelters and dog-related charities as part of its community outreach.