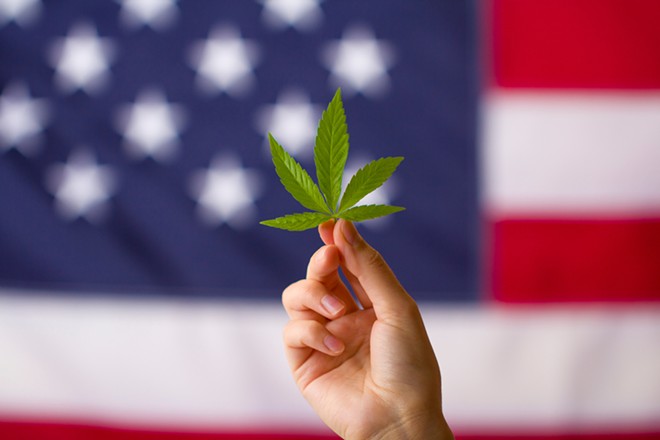 A new project has a plan for Michigan’s cannabis surplus: donate it to U.S. military veterans to help them treat conditions like post-traumatic stress disorder.

Michigan’s recently approved Veteran Compassion Care program, a partnership between the Hero Project USA and the Canna Social Equity Foundation, is modeled after a similar program launched in California.

Due to the federal prohibition of cannabis, the U.S. Dept. of Veteran Affairs frowns upon its use by vets. But Canna Social Equity Foundation executive director Connie Maxim-Sparrow says many vets who have been diagnosed with post-traumatic stress disorder or traumatic brain injuries say they would rather use cannabis to help treat their conditions than other drugs.

Maxim-Sparrow says the conditions were right for such a program in Michigan. It could also help manage Michigan’s cannabis surplus, caused by an overabundance of licenses which has led to a drop in the price of cannabis, hurting local growers and dispensaries.

“It would be helpful, I think, that if we had this donation stream, we would be able to combat this oversaturation of products,” she says.

Maxim-Sparrow says she was first approached with the idea in 2021 by California-based cannabis delivery company Eaze, which helped launch a similar program there, to bring it to Michigan. “Well, unfortunately, Eaze is not operating in Michigan anymore,” Maxim-Sparrow says. “And so they kind of pulled away from working with us on this project. But what was beautiful about it was they gave us all of their guidance documents that they have in California.”

Maxim-Sparrow says she and her partner Anton Harb tried for months to get the state’s previous Cannabis Regulatory Agency executive director Andrew Brisbo to move forward with the project, to no avail. Acting director Brian Hanna was appointed to replace Brisbo earlier this year, and Maxim-Sparrow says he immediately greenlit the project. Hanna is also a military vet, having served as a Captain in the U.S. Army Reserve.

“In a matter of seconds, he said, ‘Yeah, go ahead and move it forward,’” Maxim-Sparrow says. “We were kind of shocked.”

Maxim-Sparrow says she hopes to launch the project in 2023 with a pilot featuring 25 Michigan veterans diagnosed with PTSD or TBI that also are approved for medical marijuana cards. Cannabis retailers, cultivators, and processors will have the opportunity to legally donate commercially tested products to designated retail locations for distribution to vets, who will get the donated products free of charge.

Several cannabis businesses have already expressed interest in the program, including JARS Cannabis, Michigrown, and Premier Grow. Maxim-Sparrow says interested licensees should contact Samantha Perysian at [email protected] to find out how they can participate.

The goal is to expand the project even further in Michigan in 2024, Maxim-Sparrow says. She hopes to also bring it to Missouri, where voters recently approved adult-use cannabis.

Leyland "Lee" DeVito grew up in the suburbs of Detroit, where he read Metro Times religiously due to teenaged-induced boredom. He became a contributing writer for Metro Times in 2009, and Editor in Chief in 2016. In addition to writing, he also supplies occasional illustrations. His writing has been published...
Read More about Lee DeVito
Scroll to read more Cannabis News articles