Pot at the polls

Detroit's Proposal M seeks to legalize possession of up to 1 ounce of marijuana on private property by adults 21 and older. In Grand Rapids, Proposal 2 calls for making possession or use of marijuana a civil infraction punishable by a fine of up to $100. Kalamazoo voters will decide on amending the city charter to allow up to three marijuana dispensaries in the city. And in Flint and Ypsilanti, there are questions on the ballots that, if approved, would direct police to make enforcement of marijuana-possession laws their lowest priority.

For marijuana law reformers, this is the most significant Election Day ever. By this time next week, we should see some interesting developments in the movement. If voters in even one of the three states where legalization is on the ballot — Colorado, Oregon or Washington state — decide to approve and regulate the use of marijuana for adults, it will probably be a long-term game-changer. And, based on the polls, it's looking very likely that the initiatives in Colorado and Washington will pass.

"That there are so many initiatives going this fall really speaks to the fact that public opinion is changing in America against prohibition and for a wide variety of different reforms," says Morgan Fox, communications manager for the Washington, D.C.-based Marijuana Policy Project. "Washington looks like it's polling very well, and they have put together a good campaign to appeal to undecided voters; people who are not the most comfortable with marijuana but also uncomfortable with the way things are being run now. They got a lot of respectable establishment figures to not only back the initiative, but to be its primary spokespeople. People in Colorado are fairly used to a legitimized marijuana industry. I think there is a good chance it will pass in Colorado. It's still polling higher than the opposition. Oregon is not polling well. They had a lot less time to work on their campaign, but it's always possible."

There are no public polls available for initiatives in Michigan cities, although the general mood of the electorate bodes well for marijuana reform. Polls show that about 80 percent of Americans support medical marijuana, and a recent Huffington Post/YouGov poll shows 59 percent support for outright legalization of the substance.

"What will it mean if a state flips?" asks attorney Matt Abel, president of the Michigan Chapter of the National Organization for the Reform of Marijuana Laws. "Hopefully it will hasten the day when there is federal rescheduling of marijuana from Schedule 1 to 2 or lower, or out of scheduling altogether like alcohol and tobacco."

Abel and his colleagues at NORML are encouraged by the opportunity for significant change to marijuana laws on a state level and expect it will help raise awareness on a national level. "That's what needs to happen," he says. "These initiatives will at least force the discussion, if any of them are successful. Washington is likely to pass, and Colorado is likely to pass. In Michigan, laws in several major cities will take the drug war down a notch on marijuana at the local level and allow police to focus (their) resources on violent crime, which is where we want the focus to be."

If just one state's voters chose to legalize marijuana, it's going to force the issue at the federal level. So will the government then stick to its guns and fight a state on the issue, or will it relax its stance? Given the economic issues facing the nation, I don't think the feds want to fight a state over marijuana. It also depends on who wins the White House. Both President Obama and Mitt Romney have voiced their opposition to easing marijuana laws, but a recent editorial from Medical Marijuana Business Daily, a Colorado-based Internet publication, argues that, on this issue, voters should favor Obama. Their editorial says that while Obama has cracked down on medical marijuana facilities, his policies have allowed them to flourish — and that the crackdown is basically election-year politics in the face of an industry that's grown much faster than anybody expected.

It also makes the unfounded assertion: "We expect Obama to ease up if he is (re-elected) and work to find a tenable solution for states with regulated MMJ industries." Regarding Romney's attitude, the editorial referred to statements the candidate made back in May. "I think marijuana should not be legal in this country," Romney said in an interview. "I believe it's a gateway drug to other drug violations."

Still another chilling aspect of a Romney presidency has emerged in recent weeks. Alternet, a California-based Web news outlet, published a story titled "11 Enemies of Marijuana Legalization." Michigan Attorney General Bill Schuette was one of them. Schuette has a national reputation as an anti-drug warrior. He's also the chair of Romney's Michigan campaign. Think about that: Schuette having the president's ear on drug policy, or worse.

"He could be the U.S. attorney general if things go poorly," says Abel. "I certainly hope Romney doesn't get elected."

The MMBD article sums up the prospect of a Romney presidency and its effect on medical marijuana thus: "If you think the situation is bad now under Obama, consider what will happen if someone who is actually against the very idea of MMJ is in power. And you can bet Romney will take a harder line than Obama against states that approve the general use of marijuana."

Next week, we'll know whether the path to rescinding marijuana prohibition has grown shorter or if there are more obstacles in the way. Either way, it behooves you to vote.

Martin Lee, author of Smoke Signals, a Social History of Marijuana, will speak at a number of Michigan venues Nov. 8-11. On Nov. 8, he'll be at Ann Arbor's Crazy Wisdom Bookstore; Nov. 9 at Om of Medicine in Ann Arbor; Nov. 10 at the Robert C. Randall Memorial Wellness Center in Flint; and Nov. 11 at Woodward Health Solutions in Detroit. 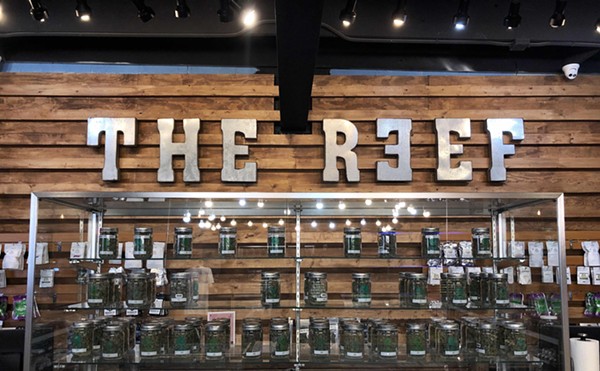