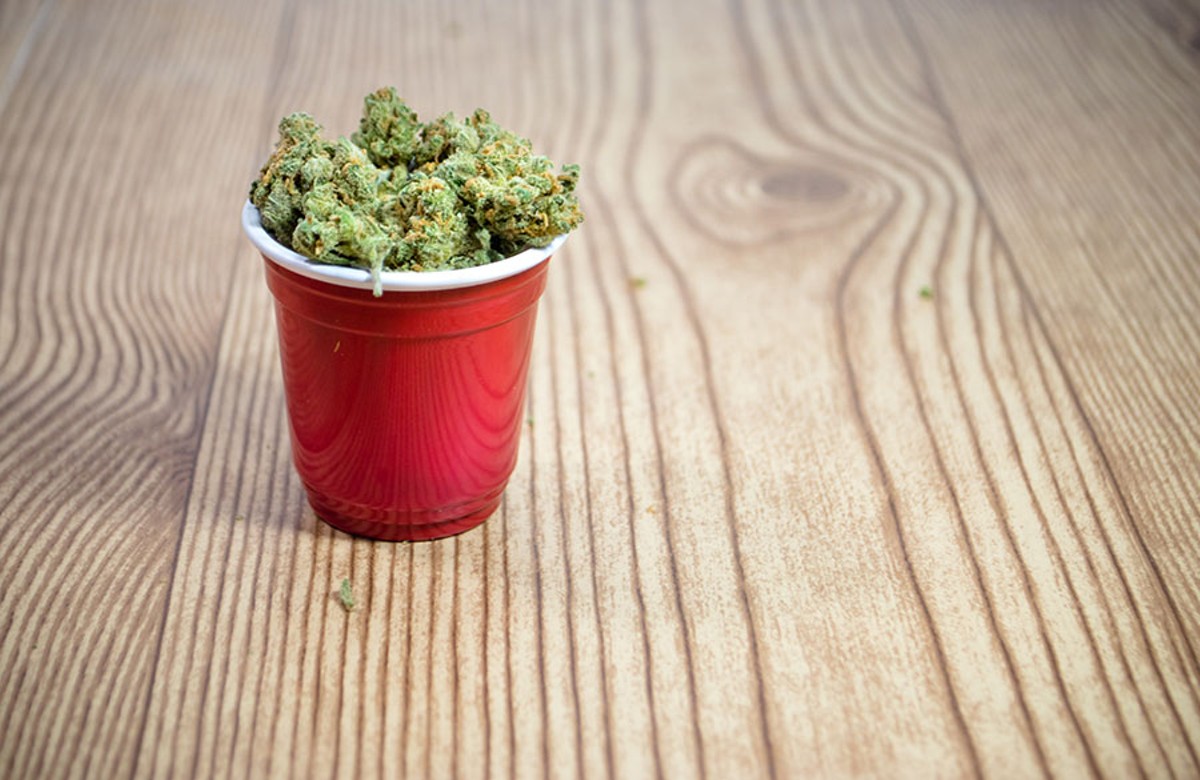 Marijuana and alcohol are headed for a showdown despite a temporary courtship brought on by the idea of regulating marijuana like alcohol. It's an easy though not particularly exact comparison. In a campaign to legalize and de-stigmatize marijuana, making the comparison to something familiar and legal (alcohol) can be helpful.

The idea of regulating marijuana like alcohol invites the comparison of the two substances. Alcohol and cannabinoids (the active molecules in marijuana) are very different substances and interact very differently in the human body. Alcohol is a toxic substance that does only bad things. According to the results of a recent international study looking at the data on 28 million people in 195 countries there is "no safe level of alcohol" consumption. This obviously belies the common idea that a single glass of wine each day is healthy.

Alcohol intoxication is the body's reaction to having ingested a toxic substance — literally poison. Ingest a larger amount and one suffers disorientation, dizziness, nausea, and headaches. Throwing up is the body's way of getting that toxic stuff out of you.

Those are only the immediate effects. The study also detailed devastating long-term effects of alcohol use. It found alcohol use generally leads to premature death and disease, cancer (head, neck, esophageal, liver, colorectal and female breast cancer), heart disease, strokes, cirrhosis of the liver, diabetes, and pancreatitis. Alcohol use also lowers the immune system's ability to stave off communicable diseases, leads to unintentional injuries due to accidents, and causes mental health problems.

Don't get me wrong, I'm not trying to get you to stop having your evening cocktail — cheers. We've already had our fling with alcohol prohibition. This is more about having some awareness and perspective about alcohol. Something of a "You're grown up, you can choose your own poison" attitude.

Speaking of poison, women who drink alcohol while pregnant put their babies in danger of fetal alcohol syndrome. Without getting deep into it, that's a spectrum of disorders that in the long run lead to health and socialization problems. Now compare that outcome to a study done in Jamaica in the late 1960s and early 1970s sponsored by the U.S. National Institute on Drug Abuse. The study followed 24 children whose mothers used cannabis while pregnant and 20 whose mothers did not. In Jamaica cannabis is used medicinally in teas, tonics, and other methods of application.

Melanie Dreher, then a student and now a doctor of nursing, ran the five years study. The results found that there were no negative effects on the children at birth nor five years later when ready for school. In fact, the children who'd been exposed to marijuana seemed to excel.

The National Institute on Drug Abuse dropped what might have been a study up through adolescence and adulthood after those preliminary results.

Made for each other

Now consider cannabis, a mostly benign substance. Cannabis literally was made for the human body. That is because there are cannabinoid receptors spread throughout our bodies, although they are mostly concentrated in the brain and gut. We're taking a brief dip into science here: The endogenous cannabinoid system in our bodies functions to maintain a stable internal environment. Our bodies produce endocannabinoids, which help regulate various systems. For example, if you sustain a cut, the body makes cannabinoids and sends them to the site to mitigate pain and swelling to begin the healing process. The receptors for these cannabinoids are imbedded in cell membranes.

Cannabinoids in marijuana are known as phytocannabinoids (plant cannabinoids). The most well known of these are THC and CBD — that's what's in those little white crystals that grow on the marijuana flower and the oils that stick to your fingers. These cannabinoids interact with our cannabinoid receptors and have the various effects that they have.

Some of those effects are very healthy. As opposed the fact that alcohol makes you sick, almost all the effects of marijuana are beneficent. You relax, it helps you sleep, gives you a healthy appetite, relieves nausea — and those are just the common effects. Cannabinoids are showing great promise in preventing epileptic seizures, treating some cancers, giving relief to people with multiple sclerosis, and treating chronic pain and a host of other ailments. Yes, marijuana abuse can lead to some mental health issues but next to the list of problems caused by alcohol it's not a major issue. Again, chose your own poison. Going to work for a crappy boss can cause mental health problems too.

Any fair-minded comparison of the two substances would conclude that marijuana is a much safer substance to imbibe. Alcohol is a toxin that your body labors to eliminate. Cannabinoids are welcomed by receptors that exist in our bodies. Our bodies manufacture cannabinoids. Do our bodies make beer?

It would seem that people would begin to notice that you're better off with buds. Wait a minute, they are. A joint study with two U.S. Universities and one in Peru found that over a 10-year period counties located in medical marijuana states had a nearly 15 percent drop in monthly alcohol sales. The overall conclusion is that marijuana and alcohol are strong substitutes for each other.

That's noticeable and significant. Given a level playing field, more people will choose the intoxicant that doesn't cause heart disease.

When you put together the drop in sales along with a horizon where recreational use of marijuana is increasingly legal, it has to scare people who manufacture and distribute alcohol. They're paying attention and they're doing something about it. In the past what they did was contribute to anti-marijuana efforts. Now they're starting to jump on the bandwagon. Just a few weeks ago Constellation Brands — the umbrella company for Corona and Ballast Point beers as well as Robert Mondavi Wine — boosted what it already held in Canopy Growth Corp. by $3.8 billion. Constellation now owns 38 percent of the Canadian marijuana company.

Other alcohol producers are also hitting the bong so to speak. Molson Coors Brewing Co. and Heineken NV both have ventures in progress to produce non-alcoholic cannabis beverages. In the head-to-head fight with cannabis, the brewers are beginning to capitulate.

Maybe that's the wave of the future. Evidence shows that it healthier and people seem to know that. In time as the stigma against marijuana lessens, a lot more people are going to figure it out.

Proposal 1 is the official state designation for the proposal to regulate marijuana like alcohol that will appear on the Nov. 6 ballot. The lawn signs, T-shirts, bumper stickers, and other stuff is "Definitely on the way!" says attorney Jeffrey Hank, who is a member of the Coalition to Regulate Marijuana Like Alcohol. Proposal 1 at its most basic understanding makes it legal in Michigan for adults 21 and older to possess and use marijuana. It does not change the Michigan constitution, nor does it change anything about the medical marijuana system currently in place.