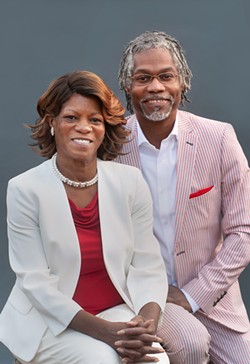 If there are going to be cannabis retail stores, it's a given that there will be cannabis retail franchises. Let's call it a next step that Unity Rd., a national cannabis business, has inked an agreement for its first Michigan- (and Detroit)-based retail franchise. The mother and son team of Patricia Allen and Michael Henry are signed on for a Unity Rd. cannabis franchise whenever the legal situation shakes out and Detroit gets around to having recreational sales.

Apparently, their advice to themselves was to get into this new marijuana thing.

"We want to marshal all of our skills together and hopefully create some generational wealth for our family," says Allen, who owns the corporate strategy company Cavanaugh Advisors with his mother. "We want to be players in this industry in the city because we care about the city."

Getting into marijuana sales can be complicated with city and state licenses required, legal advice and costs, real estate issues, staffing, inventory, and more involved. That's where Unity Rd. can be helpful. Services touted on Unity Rd.'s website include compliance strategy, employee excellence, finance blueprint, marketing support, proven processes, and purchasing power. A lot of the things that owners previously had to seek out and figure out on their own have been corralled with the experience of having done business in several states.

Allen and Henry found out about Unity Rd. while in sessions with the Detroit Cannabis Project. According to Henry, franchisees are offered services on an a la carte basis — you can choose which ones to take advantage of. Franchisees fully own their own businesses. Item 9 Labs, the parent company of Unity Rd., touts 75 active cannabis strains and more than 150 differentiated vape products as well as a number of concentrates.

In Detroit, the arc of cannabis retail has been marked by a reluctant city administration and a series of legal challenges that even now threatens the establishment of recreational outlets. Allen and Henry are well aware that the situation is uncertain even as they signed a franchise agreement. Their licensing is not complete and they don't have a location established, let alone the build-out for cannabis retail.

The Unity Rd. franchise workings seem to be compliant with Michigan law and city requirements. But that's what they do, and with dozens of businesses in several states, Unity Rd.'s people should understand the compliance game. They're looking to establish 20 franchises across the state of Michigan, and Item 9 needs to establish cultivation and processing facilities here in order to complete the supply chain.

More information is available at unityrd.com.