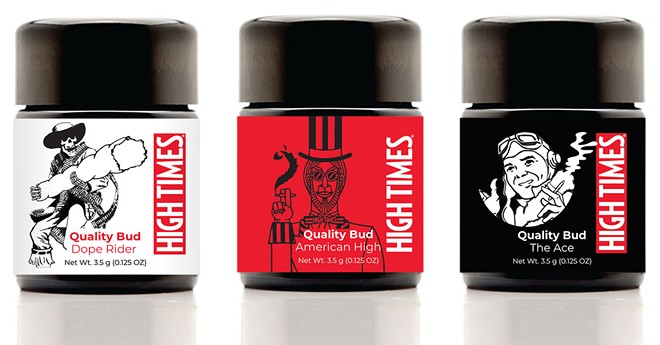 High Times is the oldest and probably most recognizable brand in marijuana. High Times magazine has been around since 1974, when even talking about the stuff was pretty much forbidden, and blew minds by printing big, beautiful color pictures of trichome-laden buds. In addition to advocacy and culture, the magazine informed you how to produce stuff like what was in the pictures and where to get the equipment to do it.

Now that marijuana is becoming more and more legal — certainly aided by HT efforts — the folks who brought you the pictures are now bringing you the real buds. High Times, now more than a magazine, is blowing minds again with its lines of top-shelf, limited edition weed that dropped last week in 22 Michigan dispensaries.

The three distinctive strains are packed in Black Label, Red Label, and White Label jars. They all seem to deliver the goods for folks seeking a powerful THC experience. The HT folks sent out an eighth of each kind, and seeing that my birthday was Saturday, it was time for a lost weekend checking this stuff out.

The Black Label seems the most distinctive of the lot. It's called The Ace and accompanied by an illustration of an old fighter pilot. The Ace is actually Super Lemon Haze — a Sativa-dominant hybrid of Lemon Skunk and Super Silver Haze, with 25 percent THC. It smelled fruity although not necessarily lemony to me. Maybe my nose isn't that sensitive. It was sticky to the touch as I broke up a bud. Neither of the other two felt sticky to me. When I took two strong tokes it delivered a very heady, long lasting high. When I took several tokes on another occasion I was blown away and goofy for hours.

The White Label strain, called Dope Rider, is depicted with a skeletal cowboy wielding a giant joint. The strain is LA Kush Cake — an Indica-dominant hybrid of Wedding Cake and Kush Mints, with 24 percent THC. It has an earthier odor with some piney tinges. The two-toke try was not so heady but delivered more of a body high. Later when I smoked more freely it was the same, although accompanied by some little rushes up my back and into my neck. I'm pretty sure that couch lock set in, although it was an HBO documentary on the singer Mavis Staples that sat me down in the first place. Love me some Mavis!

The Red Label, called American High, is depicted by a bearded man wearing a top hat. It's a strain known as Oreoz — an Indica hybrid of Cookies & Cream crossed with Secret Weapon, with 22.25 percent THC. It also smelled fruity with a little bit of an earthy bottom. My experience is that it delivers a heady high, although not as encompassing as the Black Label, but thoroughly enjoyable. Each strain smoked very smoothly and had staying power.

These drops are limited edition and obviously aimed at the high-end market. From what I've seen from visiting several establishments, bud ranges from about 12 percent THC on the low end (although you can find stuff as low as 6 percent at times) and in the mid-20s at the high end.

Doing these evaluations reminds me of the one time I was called upon to cast my studied opinion. I'd just returned from my first trip to Jamaica in 1977. A dealer I knew who lived nearby called me to come over. He'd just bought a pound of weed that was supposed to be Jamaican and wanted me to tell him if it really was. I don't know... coulda been.

High Times weed is available in Detroit at 5& Dime, Motown Meds, Shake and Bake, and at the House of Dank locations on Eight Mile, Fort, Gratiot, Livernois, and at the Bel Air shopping center; Breeze in Hazel Park; the Exclusive and Elite Wellness in Ann Arbor, and H.O.D. in Ypsilanti. It's also available at locations in Traverse City, Bay City, Kalamazoo, Grand Rapids, Jackson, Vassar, Morenci, and Mt. Morris.

Or at least it was — the last time the company did a limited-release drop, the products sold out quickly. But there will be more drops from High Times, as well as a line of vapes, gummies, and prerolls featuring the same strains. The company plans to establish its own stores in Michigan later this year.